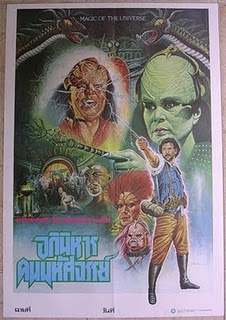 When I was first told to watch Alucarda, I was told how utterly nuts it was, how it was totally bonkers and I had to see it because it was the greatest satanic lesbian convent movie ever made.  Well, it’s pretty good, but it seems I have a higher threshold for insanity than even most of my B-movie cohorts do, because I thought it was honestly pretty short on the lunacy and instead was basically a decent little gothic horror flick right on the cusp of the full-blown satanic lesbian convent craze but still being a little too quaint to fully revel in the perversions that subgenre would give us.

It turns out that you need those boring stretches of talking or people wandering around foreboding hallways and caverns lit by torches to fully appreciate and enjoy the crazy parts, because if a movie is pedal-to-the-metal bugfuck looney toons the whole time, it’s just exhausting.  Take for exhibit A tonight’s movie, Magic of the Universe, the Filipino answer to Legend, Prisoners of the Lost Universe, Labyrinth, and Adventures In Babysitting.  Okay, probably not that last one, but there are so many bizarre stolen elements in this movie you could make a drinking game of piecing them together.

The world’s greatest Filipino traveling circus magician, Jamir (pronounced throughout by the terminally indifferent dubbing team as, Jamil, Jamar, Jamal, Jammer, and oddly enough, Walter), does a trick in his act whereby he makes his daughter disappear and then calls her back.  Now, it’s implied that every time he does this, he really does use honest-to-Satan magic to make her disappear, but no one seems to think this is weird, so either this movie takes place in an alternate reality where magic use is common (and he’s gonna piss Dormammu off sooner or later messing around with other dimensions like that), or he has inherited magical powers from his grandfather (more on this later) and decided that instead of ruling the world, he’d make pocket change performing for children.

Anyway, he is unable to call his daughter back, so they call off the rest of the show and he goes to a black magician (further implication that real magic is common in this world) to help him get her back.  After much noisy chanting and eating of monkey brains…nothing happens.  So Jamir (or Jammer, or Walter, or whatever), his wife, and his goofy chubby assistant (again, that dubbing team can’t seem to decide what his name is, but most often it sounds like they’re saying Blow Job, so we’re gonna roll with that) wander off.  In their grief, they set up shop along the side of the road in the middle of fuck-all nowhere and Blow Job starts crowing about how Walter is the greatest magician in the world, and pretty soon a bunch of little kids wander out of the woods to watch them perform.  Before the first trick is over, a strobing light transports our heroes (if you really want to call them that) into…I dunno.   The Universe, I guess.  Some crazy alternate dimension, where instead of Dormammu and Mindless Ones we have a whole assortment of strange creatures, led by the evil sorceress Akura.

Jamir is visited by the ghost of his previously mentioned grandfather, who looks like Grandpa from Texas Chain Saw Massacre dressed up in Colonel Sanders’ white suit.  He is told that, long ago, gramps pissed off Akura by messing around in the Universe, and now she’s kidnapped his daughter to get back at him.  He must find some sacred weapon called the Regalia, which will make him the most powerful magician ever, and destroy Akura’s evil so he can get his daughter back.  So he and Blow Job go rushing off to the rescue.

Their progress is monitored by Akura, via her bald, gibbering baboon henchman watching them on a TV screen embedded in the belly of a little hairless, rabbit-eared mogwai-like creature called Globo.  An aside here; in the opening credits, each character was listed along with a picture of them and the actor’s name.  “But Ragnarok,” I hear you say.  “You could’ve just found out all the character’s real names from that!”  To which I reply, “Isn’t it much more fun to call the chubby assistant Blow Job?  Now shut the hell up!”  Anyway, the last credit was given to this creature, with the caption, AND GLOBO as HIMSELF.  This gives me the queasy feeling that the makers of this thing were expecting Globo to be the next big craze with the kids, and would propel the movie into international blockbusterdom as every child begged his or her or its parents for a Globo doll.  A fire in every hearth, a chicken in every pot, a Globo in every crib.  Buh.

And now we meet Akura, who is heralded in her Boschian lair by repeated strikes on a gong, followed by a booming, echo-effected voice shouting, “AKURA!” over and over again.  In this instance, the movie is actually very effective atmospherically.  The surreal, smoke- and fire-filled sets, combined with the sensory attack of that damn gong and the roaring voice, become very unsettling because - and here’s the trick - it goes on for fucking ever!  BONG “AKURA!” Oh, I guess Akura’s coming.  BONG “AKURA!” Geez, we get it.  BONG “AKURA!” God, shut up already.  BONG “AKURA!” Um… BONG “AKURA!” Is anyone else getting a little uneasBONG “AKURA!” whatthefuckishappening!? BONG “AKURA!” I’m in hell!  All I wanted to do is watch a crappy Filipino fantasy movie and now I’m going to be raped by demons forBONG “AKURA!”  HOLY SWEET BABY JESUS MAKE IT STOP I’LL GO TO CHURCH I PROMISE OH DEAR GOD JUST MAKE IT STOP!  And then Akura shows up and what a fucking disappointment she is.  This weird, bald, eyebrowless woman with a giant forehead and a bat wing tiara.  Not really living up to the terrifying introduction there, honey.  And the laughing.  Akura is never silent any time she’s on screen.  If she’s not delivering a line, she’s chortling, “Ah ha ha ha ha ha!” over.  And over.  And over. And over again.  As scary as her intro tune is, her laughing is every bit as annoying.

Anyway, she gloats over Jammer’s wife and daughter for a while, and they escape only to be captured by her guards who look like the retarded incest babies of Jabba the Hutt’s pig men and the Tra La Logs from the vastly underrated 80’s kid-finds-cannibal-proto-humans-in-the-woods-and-feeds-his-enemies-to-them movie The Pit.   And then Akura gloats, and they escape, and they’re captured, lather rinse repeat.  Somewhere in here Akura has a big celebration of her impending victory by throwing her monsters a disco dance party with a live band that looks virtually identical to GWAR.  You can even see her groovin’ and shakin’ in the background, sitting on her throne flanked by gigantic fire-breathing hell beast versions of Crow T. Robot, while the band is playing.

Meanwhile, Jamilar meets up with some kind of forest goddess, who helps him obtain the Regalia.  Now, with a name like that, I expected it to be some kind of badass holy armor.  She says it’s the Staff of Justice.  A bit out of left field and Regalia isn’t a very good name for a staff, but whatever.  I can roll with Jamar walking into Akura’s lair with a huge staff, maybe with a spear head on it, and shooting magic bolts at everyone.  But when it appears in his hand it’s…a drum stick with a graduation tassel on the end!?  What the fuck!?  Well, whatever, it’s almost over.

Blow Job gets captured and forced to have a fight-to-the-death with the fearsome Executioner, who is a willowy girl in a robe with some silly makeup.  When your fearsome Executioner gets her ass handed to her in a kung fu fight by a chubby kid named Blow Job, you need a new champion.

Forest Girl goes ahead on ahead of Jamir, but Akura destroys her and has her beefy gold-painted henchman Krug (who would get his dick knocked in the dirt by David Hess any day of the week) chop her head off and cook it so Akura can eat it and be all powerful.  Jamir shows up, and Akura threatens to kill his wife and daughter if he doesn’t hand over the gay drum sti…I mean, the Regalia.  So he does, and just when all looks lost, Blow Job saves the day by grabbing the Regalia from Akura and tossing it back to Jamir!  Woo!  Go Blow Job!  Some cheesy post-production lightning puts paid to the baddies and the tiring, crazy end.

You may be thinking that‘s a lot of plot description, and that it doesn‘t really sound like that much of a plot at all.  Well, you‘d be right.  Also, that’s only about a third of the shit that happens.   I didn’t even mention the samurai guy or the swamp monster.  Well, I did just then, but you know what I mean.  You get my point about it being exhausting?   It’s just too much.  All those times I watched nutty Shaw Brothers movies or something like that, thinking, Man, this isn’t nearly crazy enough, how wrong I was.  There is a very delicate balance of crazy that must be struck with plot and character development, or at least something a little boring to make you appreciate the craziness.

This movie is like the new Exodus record.  It’s just a nonstop attack on your nervous system that, broken down into its constituent parts is something gloriously awesome, but taken as a whole just wears you down to the point where you go into a sort of shock state.   Be thankful for the boring parts.
Posted by Bryan Clark at 4:15 PM