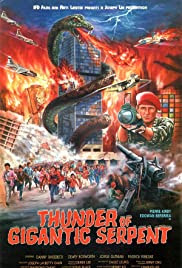 Written by: Godfrey Ho (as Benny Ho) from a treatment developed by George Chu, from a story by AAV Creative Unit

As far as I can tell, people react in one of two ways when they hear the name Godfrey Ho. The more common reaction is to simply say, “Who?” and then immediately regret their politely feigned interest when every enthusiastic B-movie lover within earshot starts telling them all about guys named Ted with mustaches and feathered hair, wearing headbands that say NINJA on them. The other reaction, reserved for the aforementioned enthusiastic B-movie lovers, is to start giggling like a middle-schooler who just heard the phys-ed teacher say “testicles” for the first time in health class.

Ho got his start at Shaw Brothers Studios working as an assistant director for the legendary Chang Cheh, who made many of that studio’s classic martial arts movies and period dramas like FIVE VENOMS (1978), THE KID WITH THE GOLDEN ARM (1979), and THE WATER MARGIN (1972). You’d think that working with someone who made films of that caliber would teach young Godfrey a thing or two. It would be akin to a young Ed Wood getting to work with someone like John Ford. Fortunately for us, he apparently didn’t learn a goddamn thing. His movies consistently make Wood’s worst offerings look positively competent by comparison, and are therefore consistently far more entertaining.

Partnering with Joseph Lai, who he met while working at Shaw Brothers, the two launched several companies together, including IFD FIlms, which released most of the 115+ movies he cranked out over his career. He also directed a good few pictures for Filmark International, the company run by equally notorious peddler of insane trash cinema Tomas Tang, including one of my all-time favorite batshit crazy movies, ROBOVAMPIRE (1988).

Godfrey Ho’s trademark style was to take footage from existing movies and unfinished projects, shoot new footage with a stable of poofy-haired white guys whose acting range ran from catatonia to hysteria and nothing in between, and stitch it all together with the most sublimely awful dubbing you’ll ever hear.

The main source of protein for tonight’s Frankenmovie comes from a Taiwanese flick called KING OF SNAKE (1984). Unlike most of the movies he got his hands on, KING OF SNAKE’s story seems to have made it through Ho’s cinematic mad science lab more or less intact, with only the addition of Solomon and special forces agent Ted Fast to give the already present mob plot an international flavor (and marketing angle, of course).

We are introduced in quick succession to Solomon, some manner of international criminal who wants to get his hands on a “formuler” (gotta love that Hong Kong dubbing) that will allow him to rule the world by controlling food production; Ting Ting, a precocious little girl who has an extremely intelligent pet snake with the unlikely name of Mozler (it can apparently understand human speech and respond to her by nodding its head); and finally to Dr. Lai (Infra-Man himself, Danny Lee!), inventor of that “formuler” Solomon wants to get his hands on so badly.

Dr. Lai is not a happy dude because he’s just been informed by the military officer overseeing the development of his miracle . . . whatever . . . that they are ready to take things into the animal testing phase. Lai insists the “formuler” was only meant to be used on plants to end world hunger. I guess he’s not a very imaginative guy as brilliant inventors go because I think most people would hear alarm bells if they had a magic growth ray and the army came knocking on their door talking about something called Project: Thunder.

Dr. Lai leaves the project in objection to its military use by his military financiers and the remaining scientists test the device on a frog. Wait a minute, I hear you saying. Didn’t you say they were calling it a “formuler”? Yes, I did, and yes, they were. It turns out not to be some kind of serum but a box with little lights in it. They put the frog in, it gets zapped by some animated blue lightning, and presto! Giant frog. No sooner do the scientists start to celebrate their success than a group of terrorists break into the lab and attempt to steal it for Solomon. One of the lab assistants takes the growth ray machine and high-tails it off the base while the rest stay behind to destroy their notes and make sure Solomon can’t rebuild the thing from blueprints. When it becomes clear the assistant is not going to outrun them in a car chase, she throws the box and herself out of the car and down a steep embankment. It’s a race against time, as both the army and Solomon’s goons try to find the box first.

Of course, there would be no thunder of serpents gigantic or otherwise if we had heard the last of Ting Ting and Mozler. The little girl finds the box while playing and decides it would make a fine terrarium for her snake. She turns on the lights for him before turning her attention to homework, and is shocked to find just minutes later that her foot-long pet has been replaced by a twenty-foot monster. Quickly accepting the bizarre situation as only children can, she recognizes that Mozler, who already met with disapproval from her parents when he was tiny, can no longer stay in her room. She takes him to the field she plays in where there is a shed that is apparently an abandoned TARDIS because inside it’s a huge warehouse and tells him he’ll have to stay there for the time being.

It doesn’t take Solomon’s men long to figure out where the box went but, when they go to threaten Ting Ting and her family to retrieve it, they are met with resistance in the form of an angry and protective Mozler. Momentarily forgetting they are a terrorist organization possessing enough ordnance to do battle with an actual army, they come up with an unreasonably complicated plan to lure Mozler into some kind of electrified enclosure and fry him.  The dose of high voltage has an unexpected effect on his already unstable molecular structure and causes him to grow (no one actually says anything by way of an explanation for Mozler’s growth spurt but, when you watch this kind of movie, you frequently have to do a lot of the heavy lifting yourself).

Will Ting Ting and her family escape Solomon’s clutches with their lives? Will Mozler find true love? Did the filmmakers include actual footage stolen from MOTHRA (1961) because they thought the last half of the movie was too subtle a ripoff? Are the Sons of Anarchy really in charge of the Republic of China Army? The answers to these questions and many more in the -- uh...sure, I guess we’ll go with thrilling -- conclusion of THUNDER OF GIGANTIC SERPENT!

OK, let’s address that Sons of Anarchy reference first. It almost beggars belief that the cheapest, silliest thing about one of Godfrey Ho’s movie’s wasn’t Godfrey Ho’s doing, but seeing is believing. The uniforms of the Republic of China Army in KING OF SNAKE are represented by generic camouflage fatigues with the wrong pattern on them and red berets not at all like any headgear worn by active duty soldiers that I’ve been able to find. Parade uniform, maybe, but why would they be wearing dress hats with combat uniforms? If any of you out there are military buffs and can tell me different, please do. One of the most fun things about doing this is the learning and the research. Whatever other inaccuracies there may be, however, I feel confident in my assertion that the ROC Army most certainly did not festoon their headgear and clothing with fucking Harley-Davidson patches. They didn’t even bother to color in the logo! I was willing to give them the benefit of doubt, assuming we were all here for the giant snake and not nitpicking a few little patches, but there are scenes in the army HQ with a giant goddamn Harley-Davidson stencil on the wall!

Speaking of the giant snake, how does this flick hold up in the company of its more famous kaiju eiga brethren from farther East? It goes without saying that it’s not punching in remotely the same weight class as even the cheapest of Toho’s offerings but I’d say it’s not too far off from a TAEKOESU YONGARY(1967) aka YONGARY, MONSTER FROM THE DEEP  or a DAIKYOJŪ GAPPA (1967) aka GAPPA, THE TRIPHIBIAN MONSTER. The snake itself bends and crumples in some unfortunate ways here and there but, overall, the puppet is decent. Where the effects sequences really shine, though, is in the miniature work. The model buildings and most of the vehicles are very well made and detailed, although they have a bizarre tendency to violently explode when Mozler so much as brushes against them.

So, is it worth checking out? I certainly had fun with it, and I watched it solo and sober. I wouldn’t necessarily advise you do the same but, if you want to have a few laughs at an atrocious dub and a supremely silly script, some godawful hammy acting, and a surprisingly unembarrassing monster rampage finale, then grab some friends and some brews and fire up YouTube. If you can read Cyrillic, you can even follow along with the burned-on Russian subtitles and see how far astray the HK dubbing crew went from the actual script (assuming the Russian subtitler gave any more of a shit about it than they did)