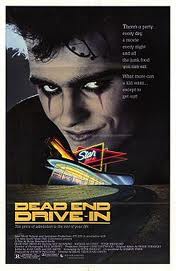 I've expressed previously my displeasure with the fact that so many of the incredibly cool-looking “Ozsploitation” flicks from the documentary Not Quite Hollywood are not readily available to us poor Yanks. All the more reason to treasure those few we can get without having to resort either to hook or crook. I'd honestly forgotten this was one of them, and nearly deleted it while trimming some fat from my Netflix queue. Luckily I looked at the information before consigning the flick to infinity, and saw it was directed by Brian Trenchard-Smith. That sounds awfully familiar... Hey, I saw one of his movies at B-Fest a few months ago! Trenchard-Smith is also the director of the exhaustingly hyperactive Stunt Rock. Well, that virtually guarantees some insane car chases and explosions, doesn't it? Let's dig in! This is possibly the strangest and most inventive post-apocalypse movie I've ever seen, and you'll see why in a minute (and if you'd rather not know why, I recommend you queue this sucker up and watch it before finishing this review - I was lucky enough to not know a single thing about it when I watched it and that's the best way to enjoy it).

We open with our hero, the exercise-obsessed Jimmy “Crabs” (“I thought I had 'em once, but I didn't!”), having his evening jog through the ruined wasteland of a city he calls home interrupted by a group of “Carboys”, the roving gangs of automotive scavengers who make up the great majority of youth culture in a society where manufacturing has been rendered all but obsolete by economic collapse. Luckily they get scared off, and he manages to secure a date with his squeeze Carmen before heading home, where we see why he's so concerned with jogging and working out. His brother, Frank, is a giant lunk of a dude, and clearly their mom's favorite. Frank drives a tow truck, but that doesn't mean here what it does to you and me. Tow drivers in this world are a fiercely competitive lot, driving heavily reinforced trucks equipped with police scanners so they can get to all the best wrecks first, secure the salvage rights to the ruined cars, all the while having to fight off the Carboys before they steal all the best parts. Jimmy rides along with Frank that night, and we get a firsthand look at how little control the authorities have over the Carboys. If they can just manage to sign over the contract for the wreck so they can hightail it back to HQ before one of them gets shot or beaten, they're thrilled.

The next night, Jimmy sneaks off with Frank's prized red 1956 Chevy for his date with Carmen, and they head off to the Star Drive-In to ignore a movie and get it on in the capacious back seat of the Chevy. While they engage in some heavy-duty canoodling, someone manages to steal the back wheels off the car, and when they go to Thompson, the manager, he tells them they won't be able to get any help until morning. The first clue that something is seriously wrong comes with the sunrise. As Jimmy opens the convertible top and stretches in the early morning air, he notices that the lot is full of stationary cars, many of them hosting the dwindling embers of campfires, and judging by how many of them have been converted into lean-tos and even elaborate hovels, most of them have been sitting there for a while. Uh oh.

All the people still at the drive-in, while not being exactly forthcoming, make it clear that Jimmy and Carmen won't be going anywhere soon, so they may as well make themselves at home. Even as he discovers that the fences are electrified, that the inmates are fed a steady diet of free booze and drugs and fast food to keep them complacent (and hey, if the alternative is a hardscrabble life fighting hulking tow truck drivers for car parts, free hooch and burgers sounds pretty good), that the drive-in and many like it are in fact designed to be concentration camps for Carboys and surrounded by heavily patrolled Security Roads where walking is illegal (and regular jail doesn't feed you cheese fries and weed), Jimmy is having none of it. He manages to steal some wheels and gasoline from a visiting police vehicle, but Thompson finds out and strips his engine just as he's ready to make his escape, and no one will believe he has gainful employment and isn't a thug to be imprisoned.

When the police bring in a herd of Asian refugees, a race riot ensues. In the confusion, Jimmy steals first a tow truck, and then a police SUV as the fuzz destroy half the compound chasing him. Remember what I said about car chases and explosions? Yeah. No one but no one does batshit crazy stunts like the Aussies.

The biggest glaring question the movie raises is, do people know about these drive-in concentration camps? Because if they do, then Jimmy deserves every crappy thing that happens to him and then some, taking a date to a place he knows full well he could be stuck in forever. And if they don't, how the hell not? How do you keep it a secret that anyone who goes to the drive-in for some nookie and a flick never comes back?

That said, it's certainly an original divergence from the usual car-chase-and-gun-battle affairs these Mad Max camp followers tend to be. I love the idea that instead of trying to actively police all the cities, they lure all the undesirables to one place with the promise of exploitation movies (among other things, you can see some of Trenchard-Smith's other movies, Stunt Rock and Escape 2000, playing in the background) and free fast food and drugs and alcohol, and most of them are aware they're in prison but they really don't give a shit and have no interest in trying to get out. I mean, if you had the choice of getting plastered and watching grindhouse flicks every day or walking miles through the Australian outback just to get shot for your trouble if you got anywhere near a road or town, what would you choose? Hell, if jail was like that for real I'd have killed someone a long time ago.