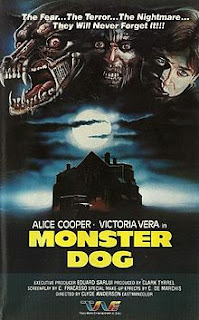 I work at an ethanol plant, where my job is to load distiller's dry grain (basically high-protein corn meal) into trucks and rail cars for shipping all over the country. When rail cars are moved, whether it's by the railroad or by us with our shuttle wagon, they're all hooked together by an emergency air brake system that can either be blown from a control on the engine's console, or will automatically lock the brakes should any of the air hoses disconnect in an accident. Whenever the cars are parked, the air brakes get set, and to move them with the hydraulic car mover I use during loading, each individual brake has to be emptied of air by pulling on a rod that opens the release valve. And now I'm finally getting to the point. The air that comes out of the brake cylinders smells exactly like the air in our old stomping grounds, Premiere Video.

Premiere Video was a very important part of this cinemasochist's journey. It supplied all of our movie nights through high school and beyond, where we discovered the greats like Dead Alive, Ilsa, She-Wolf of the SS, and Microwave Massacre. But Premiere was shaping my young mind long before that. Whenever my parents and I would go to rent movies when I was a youngster, I'd drive them nuts by spending all my time looking at the boxes of movies in the horror section that I knew they'd never let me rent. They would be ready to go and I wouldn't have even begun looking through the acceptable fare, so they would have to come back and shoo me away from the forbidden fruits of monsters and slashers, those tantalizing pictures from the video boxes burning in my brain as I was herded towards G.I. Joe and Transformers. And so while we were standing in the checkout line, and while I was watching my video, and especially when it was time for bed at night, my thoughts were filled not with Optimus Prime and Megatron, but with the gargoyle from Tales from the Darkside: The Movie; with the vampire face in the clouds hovering over the house from Fright Night; with the Freddy Kreuger worm eating Patricia Arquette in A Nightmare On Elm Street III.

There were two that plagued my nightmares more than any others, though. One was The Mad Death (which I wish I would have had the balls to watch before their tape went missing, because that thing just does not exist any more – and which I probably could have rented without much argument had I known at the time that it was a BBC TV miniseries and not a gore'n'tits-filled horror movie), which showed a clearly taxidermied but still creepy-looking fox leaping through a car window at a terrified man. It scared me even more because it was about something real – rabies – so creepy rabid stuffed foxes could jump through car windows at me, too! In fact, I remember having a very vivid nightmare about being locked in Premiere at night, and I heard videos falling off shelves, the sounds coming closer to me, and I knew with that terrible and infallible dream knowledge that it was that fucking fox coming to get me.

And the other movie whose spine-chilling, bowel-loosening box art haunted me through most of my life is tonight's feature, Monster Dog. Just take a look at that poster and think what that would have done to your six-year-old psyche. The man turning into a skinless, gory skull, stretching into the muzzle of that hellish dog thing. And there was just one picture on the back of the box, of Alice Cooper in a car with this huge head, all teeth and glowing, lantern eyes, biting into his shoulder. Who was that guy in the car (I didn't know who Cooper was back then)? How did that thing get in there with him? Would he get away or be torn to pieces? I had to know, but there was just no way in hell mom and dad would let me take that movie home. Even if it said, “unrated” on the back (which they didn't know was not the same thing as, “acceptable for all ages” and so I got the shit scared out of me by Creepazoids and had to come down off my panic attack by going for a walk and watching Bob Ross on PBS, but that's a story for another day), that cover was just too gruesome. And then the tape went missing or got traded to another franchise or just got pitched due to lack of rental, and of course no one in Mason City understood the collector's market for out of print horror movies. So my only chance to satisfy my curiosity was gone forever.

Or at least until I ran across the DVD listing on Netflix. I couldn't have been more excited if you'd told me Brian Lumley was coming over for a few beers. I threw that sucker in my queue, and bumped it up to the top, and took a week off work to sit and stare at the mailbox and wait...well, no, I didn't really do that last bit. But unholy mother of Satan was I ever excited. And then I started to worry a little. I mean, surely I was setting myself up for a massive disappointment. No way could a movie live up to over twenty years of mental self-hyping. Could it? Oh fuck yes, it could. I love it when things work out.

We open with a music video by rock star Vincent Raven (Cooper), which is truly awesome, and which we come to discover is being watched on what might be the world's first in-vehicle video entertainment system. Raven and his film crew are on the way to his ancestral home in what I think we're supposed to assume is somewhere in California, but looks suspiciously Italian. Night descends instantaneously, bringing with it fog and a police roadblock.

The sheriff recognizes Vincent as the little boy who used to sit on his lap and piss his pants, which they all find adorable. But things turn serious when we discover why the roadblock is in place. It seems this area has always had a problem with vicious feral dogs, and in recent days their activity has seen an alarming increase. Three people have been torn to pieces, and with the dog attacks and supernaturally thick fog, the roads are patrolled to warn travelers. Shortly after Vincent and company move on toward the old home place, the sheriff and his deputy are attacked and killed by a red-eyed thing that we get but a glimpse at, but is clearly not just a feral dog. A monster dog, perhaps?

Down the road a piece, Vincent hits a decidedly unmonstrous dog when it jumps in front of the van. The dog is too badly hurt to make it to a vet, but not wanting to leave the pooch to die a slow death, Vincent finds a rock and puts it out of its misery (hey, that rock was covered in stage blood before he picked it up!). Just as they're getting ready to roll again, a strange old man in a ripped shirt soaked with blood stumbles out of the fog and starts mumbling about someone returning, someone who commands the hounds, someone who will kill them all. The delivery of that line, “he commands the hounds”, is a fantastically creepy bit of work, in what is a fantastically creepy movie.

Angela has a dream that everyone in the house has been slaughtered, culminating in her finding Vincent sitting in a rocking chair, looking out the window. When he turns around, he has the face of a wolf. It's a more generic wolf face than the actual creature, and I don't know if they did it to keep the face of the actual monster a surprise for a bit longer or what, but it's an interesting cue for the audience to know that what we're seeing is a dream (that, and the fact that it's unlikely the entire cast would get killed off fifteen minutes into the movie).

No one wants to heed her warning that something evil is closing in on them, and they continue with shooting the next video. It's a cooler video, but the song isn't nearly as awesome as the first one. The shoot is interrupted by the body of the house's old caretaker crashing through the window on the upper level of the huge atrium they're filming in (the architecture of the house is another giveaway that they're definitely not in the U.S.). Then the torch-(or in this case, shotgun)bearing mob shows up on the doorstep calling for Vincent's blood to make the dog attacks stop. They force their way inside, and Vincent manages to out-Rambo them, but just as the last of the mob gets taken care of, the titular beast comes calling.

It's hard to believe such a thing could be said about the man who gave the world Troll 2, but here Claudio Fragasso captures that feeling of watching a nightmare as good or better than all but the best Fulci or Argento movies. The thick and incessant fog, the discordant moaning wind and howls on the soundtrack, the odd camera angles and unnatural light sources plus making sure the audience never gets to examine the monster too closely all add up to making this a minor surrealist horror masterpiece. The best look at the thing we ever get is its face peeking out of a bush in a family portrait hanging in the house. The picture is truly horrifying, the thing's bulging eyes staring intensely out of the leaves – the family curse lurking in the background. There are no budgetary restrictions on a painting, so the beast in the picture allows the viewer to gloss over whatever shortcomings might be seen with too long a look at the physical creature.

This is one time I think my folks would have made the right call. This flick would have scared the shit out of me as a kid. As it is, when that DVD came in the mail, I tried to give it the best possible environment to work on me. I took it into our sun room, turned off the lights, shut the doors and curtains to keep out the sound and light from the rest of the house, and sat down on the couch in isolation to give the movie my full attention. And after twenty years of nothing but a few haunting images floating around my head to build the movie up to unattainable expectations, it turned out to be one of those rare cases of being absolutely everything I thought it would be.