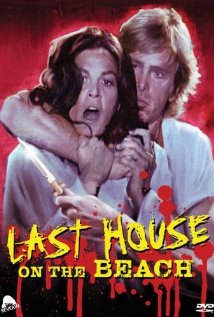 At a certain type of concert, in a certain type of venue, with a certain type of crowd, you're virtually guaranteed to get at least one guy who downs a few too many Natural Ices, picks a fight with someone who wasn't even looking at him, throws his beer cup at the band, and yells, “WOOOOOOO! Play some Skynyrd! FREEBIRD!” If you're robbing a bank in an Italian Last House On the Left knockoff, you can expect the probability that one of your accomplices is the criminal equivalent of that guy and will spaz out and mow down a bunch of your hostages for no reason when it looks like otherwise you'd have pulled your heist off without a hitch. Due to the way the first few minutes of the movie is shot, we don't know which of our merry trio of felons is the trigger happy nutcase until later, which is one of the few flashes of directorial talent Franco Prosperi shows before he apparently got bored halfway through the shoot and quit trying.

After making their getaway from the bank in a less-than-reliable Citroen, robbers Aldo, Walter, and Nino find themselves broken down on the side of the road on a secluded stretch of beach near a lavish beach house where a group of Catholic school girls and their teacher are rehearsing A Midsummer Night's Dream and studying for finals. While rounding up their second group of hostages in one day, Nino finds one of the girls naked in the bathroom and attempts to rape her. When she shanks him in the thigh (well, it looks like the thigh at first, but the wound seems to creep halfway up his abdomen by the time the movie's over) with the handle of a comb, she inadvertently makes the girls' tribulations worse, because now not only do the men have to wait for Aldo to fix the car, they have to wait for Nino's leg to heal before they can move on. Of course, if Aldo would spend more than ten minutes a day working on the damn car and Nino would lay still and let Sister Christina patch him up rather than walking around molesting the girls, they would have been on the road much sooner.

Not that Mondo Cane was made with a great deal of creative flair, but I expected more, sleaze-wise anyway, out of one half of the duo that created the mondo documentary genre as we think of it today. The first half of the flick, when the tension in the house between the hostages and the robbers is building, is a pretty well-done piece of film making. Prosperi composes a lot of his shots in interesting ways, and the whole thing looks a lot more thought-out and professional than your average Italian exploitation cash in.

Unfortunately, as soon as Walter and Nino decide they've had enough temptation and tag-team Lucia while Aldo prevents Sister Christina from intervening, the whole thing starts to unravel. What should have been one of the most upsetting sequences of the movie becomes a study in unintentional comedy. Nino gives Andy from I Spit On Your Grave a run for his money in the ridiculous mugging department, and Lucia is almost as bad; Walter, who put on some of the girls' makeup earlier because, y'know, he's crazy and stuff, looms over the whole affair like some camped-up drag queen; and the up-tempo wakka-chikka guitar rock tune on the soundtrack would be more appropriate for a car chase than a rape scene.

There's a long stretch of dull nothing (which once again does nothing but make you wonder what the hell Aldo's been doing with that damn car the whole time) between there and the next act of sexual violence, when another of the girls attempts to escape by running to the beach and making a swim for it. Aldo catches her, and leaves her to Nino and Walter for her punishment. When they fuck her to death with a large piece of wood (again making a scene that should be stomach-churning, eye-rolling instead), Sister Christina decides it's time for a little Old Testament wrath.

Prosperi demonstrates here more vision than anyone but maybe Ruggero Deodato in the department of Italian sleaze, but oddly enough, it's only once the sleaze has properly begun that the vision falters. It's like the violence was the end itself, rather than a means to tell the story, so that once things at the beach house escalate, he figured he didn't need to bother making an interesting movie anymore because it could just coast on being icky til the credits rolled. It does get a little bit of its oomph back right at the end, mostly thanks to Florinda Bolkan's performance, and I would guess the final shots had more than a little influence on the way Quentin Tarantino ended Death Proof. Still, none of that is enough to elevate this flick back out of the pit it digs for itself during the second act and most of the third. These kinds of movies are supposed to make you want to look away, but they shouldn't make you want to look at the clock instead.