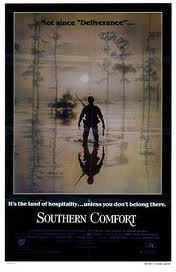 Walter Hill is not a man who believes in subtext. I like that about him. I've taken enough film and writing classes that taught us to read things into a movie or book that were pretty obviously not there to find it refreshing when someone says, “No, you damn hippy, shut the hell up”. Unless the allegory is blatantly obvious, I always felt all that analysis seemed forced and really pompous. I remember, in a high school English class, my teacher told a story of a guy he knew in another school when he was young, who had to write a paper on a Kurt Vonnegut novel. The teacher of this guy's class was one of those who thought he knew everything about everything, and he didn't want papers giving the students' point of view, he just wanted what he thought was the correct answer regurgitated back to him. But this student wrote about what he felt the book was about anyway, and got a failing grade. Not one to take such pretentious bullshit sitting down, he looked up Kurt Vonnegut's address and wrote a letter to him about it. He got a prompt reply saying, “Your teacher is an idiot, and you're right”.

During the first cast read through of Southern Comfort, Walter Hill told everyone, “People are going to say this is about Viet Nam. They can say whatever they want, but I don't want to hear another word about it”. Hill was making an exciting action movie, and that was it. Soldiers are a natural thing to make action movies about. End of statement, so all you damn hippies, shut the hell up.

A unit of the Louisiana National Guard is preparing to go on weekend maneuvers in the bayou. With the exception of Corporal Hardin, a transfer from Texas new to the team, they are clearly a bunch of good ol' boys playing soldier, not taking things seriously at all, and a group of guys you wouldn't trust with a stapler, let alone a machine gun. PFC Spencer has even arranged for a group of prostitutes to meet the men at the town they are supposed to end up at when they come out the other side of the swamp.

Of course, if they got right through with no problems and ended up happy in bed with a bunch of whores, this wouldn't be a very interesting movie, would it? Another hint none of these guys are anywhere close to professional soldiers comes when, just a couple of hours' hike into the bayou, they come to an impassable body of water. So their plan was just to wander into the bayou with no maps and hope they'd be able to find their way back out again? There are a flotilla of canoes parked on their bank of the lake, though, and after some deliberation they decide to take a few of them, and leave a note explaining why half the locals' boats are missing and where they can be recovered.

They are spotted by several Cajuns, and rather than wave a friendly hello and maybe say something about the note, PFC Stuckey decides to play a joke on the Cajuns by unloading a clip full of blanks from his machine gun at them. Of course, they have no way to know that the soldiers are on exercise and using blanks. All they see is a bunch of armed men stealing their boats and firing on them, so they do what any rational person would do in this case and return fire. Except instead of Stuckey they hit Staff Sergeant Poole, leaving the bunch of dumb rednecks without a leader. Well, their second in command is a wussy little nerd named Casper, basically the Arnold Rimmer of the group, who quotes the National Guard manual constantly while watching his command slip through his fingers by the second.

They come upon a one-armed Cajun at his cabin, and take him prisoner. Casper seems to think they're going to interrogate some information out of him, despite his speaking nothing but French, but Corporal Bowden blows up his cabin. Not that the beatings they were giving him were putting him in a very helpful frame of mind. The men quickly go from undisciplined rednecks to scared, dangerous nutjobs as they become lost deeper and deeper in the bayou with seemingly no chance of finding the interstate that was to be the finish line of the exercises, and a bunch of pissed-off Cajuns with hunting dogs and an intimate knowledge of the swamp tailing their every move.

Southern Comfort has been referred to as Deliverance meets The Warriors, but I like Tim's description, The Walter Hills Have Eyes, better. The ending, though, is especially reminiscent of Deliverance, when the only two survivors of the group (most were just shot or stabbed, but PFC Cribbs gets gakked with an impressively nasty trap right out of an Italian cannibal movie) find their way to a small town and seem like they're safe at first. But the sequence in town goes on way too long and you begin to realize, if they were safe and this was it, the movie would have ended the second they got off the truck that picked them up. Then we get to see the limit of Walter Hill's patience for subtlety, as the men being stalked through town by the Cajuns is intercut with scenes of the pigs they shared a ride to down with being slaughtered (another similarity to Italian cannibal flicks, this is some pretty intense animal snuff footage I'm surprised to see in an American big-studio flick).

My favorite scene in the flick, though, has nothing to do with the violence and action. The Cajuns have whittled the soldiers down to just Spencer and Hardin, who are thoroughly lost. It's the middle of the night, and they decide rather than get even more lost, they'll just hunker down and wait til morning to start moving again. They are woken up by a thunderous sound, and they turn around to see they'd spent the night sleeping just yards away from a railroad track they could have followed to safety. The, “You have got to be fucking kidding me”, look they give each other is priceless.

There are a couple of scenes of the soldiers arguing over who is going to be the new leader that get a little repetitive, but they are far outweighed by the punchy, brutal action, and the incredible shooting locations. The movie was shot in the bayous of Louisiana. I've commented before about filmmakers showing commitment to their projects by shooting in unpleasant locations like caves, but a cave would be nothing compared to the swamp. I can't imagine a worse place to take a bunch of sensitive electronic equipment and try to shoot a movie before everyone came down with jungle rot and yellow fever. But it's a neat trick if you can pull it off, and it looks amazing here.

It's impressive that any American movie could even come close to replicating the atmosphere of an Italian jungle exploitation movie, but Hill pulls it off. The violence and gore aren't as explicit, of course, but the fact that a big studio action movie brings such a thing to mind at all is to be commended. The flick is out of print and a little hard to find, but if you don't mind having to restart it every fifteen minutes, you can watch it in chunks on YouTube like I did. One of my coworkers had been telling me about it for years, and when Tim suggested this Walter Hill tribute roundtable, it gave me the excuse I needed to get off my ass and track it down. I'm glad I did, and I highly recommend you do too.

This review is part of a roundtable paying tribute to the career of Walter Hill.  Other contributions can be found at: