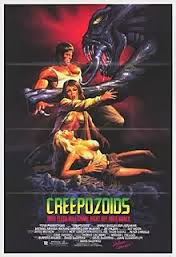 I don't mind admitting when a movie scares me. Watching Gates of Hell alone in the dark at 2a.m. scared the bejeezus out of me, although that one isn't exactly an embarrassment. But I also don't mind copping to the fact that the mutant bear cubs in Prophecy freak me out to this day, and pretty much everyone in the world but me laughs at that movie. Really, fetus monsters in general are pretty yucky. Something about tiny, slimy baby things just hits a major chord in the NOPE center of my brain. But tonight's movie is the one flick I am ashamed to say used to frighten me. Granted, I have a good excuse in that I was probably around nine or ten years old at the time, but still.

I wasn't technically allowed to watch R-rated movies until Carnosaur tipped the scales in my favor, my rabid love of dinosaurs overriding mom's objection to filthy horror movies. Of course, I'd had the novel of Carnosaur for quite some time, which contains several graphic sex scenes, whereas the movie has zero nudity. My habit of buying cheesy monster novels at used bookstores is one I've had since I was a kid, and I was reading about sex long before I saw it on the screen. After all, books are wholesome, right? Heh heh heh. But mom, not being much of an authority on movies, assumed Not Rated meant acceptable for everyone, and not either an uncut version of a movie, or just a movie that no one gave enough of a shit about to bother rating in the first place. Which is how I came to talk her into letting me rent Creepozoids one fateful day. You'd think the barely-clothed state of the women in the cover painting would have been a hint, but there was also a really cool-looking monster, and barely-clothed women menaced by monsters featured heavily in promo art for genre stories and movies as far back as when my grandpa was a kid, and that stuff was all pretty harmless, right?

I remember it was a bright, pleasant afternoon when I sat down with my video tape while mom and dad went for a motorcycle ride. Not long after I saw what was surely one of if not my first pair of nekkid boobs (Linnea Quigley's – I wonder how many adolescent boys got their first eyeful of jubblies on her lopsided fake rack?), I saw something so utterly horrifying that I panicked, scrambling around for the remote and randomly mashing buttons in my terror until the TV shut off. I ran outside into the beautiful weather, walking down the gravel road towards the little creek about a quarter mile from our house until my breathing evened out and I calmed down enough to return to the house and turn on the TV in the kitchen, tuning in to PBS and listening to Bob Ross talk about putting snow on happy little trees with titanium white paint to further soothe my still jangling nerves. No way in hell was I going back down into the basement; goddamn Creepozoids was still down there in the VCR!

I don't think I ever said anything to mom or dad about it. After all, if I told them how badly the movie had scared me, they'd never let me rent a horror movie again! It would be nothing but Disney movies until I moved out. It was a vivid memory, though, one that sticks with me to this day. Not too many years back, a Family Video opened near our home, and lo and behold, they had a copy of Creepozoids! Now I could finally revisit the movie and see the rest of what had terrified me so badly. Oh boy was I in for a surprise. I mean, I didn't expect to still be scared by it, but I wasn't quite prepared for what an utter piece of shit it was either.

It's the far-flung futuristic Year of Our Lord Nineteen Hundred and Ninety-Eight, and all the world's superpowers have gotten tired of each other's shit and lobbed enough nukes back and forth to make the whole world look like an abandoned industrial district in Los Angeles. A small group of deserters from a military base (it's a nice touch to let us know that it wasn't one of those full blown civilization-ending apocalypses, just a little fallout and a shitload of giant rats) seek shelter from one of the days-long acid rain storms that are now common as part of the environmental clusterfuck resulting from pummeling mother Earth within an inch of her life. They find their way into an unassuming looking brick building that is home to some kind of abandoned scientific installation. The group is pretty pleased with their luck at first, but Jesse, the brains of the group, quickly begins to suspect that they may be better off taking their chances with the acid rain. He manages to get one of the amusingly dated computers working and discovers that the scientists had been working on a way to make the human body capable of producing amino acids on its own so that the shortage of non-radioactive food won't wipe out the human race. While this is partially accurate science – 9 of the 20 standard amino acids are called “essential” because our bodies can't produce them from other compounds internally and so they must be ingested in food – they seem to have forgotten that there are a good deal of other things like vitamins and minerals that we also need to get from our food.

Wouldn't you know it, giving people the ability to manufacture all essential amino acids has the unfortunate side effect of turning them into a cheap knockoff of the instar stage of the creature from Alien that appears to be made mostly of black garbage bags. Jesse finds this out the hard way when following strange noises into a store room leads him right into the thing's mandibles. Strangely enough, we see him the next morning at breakfast seemingly unharmed. Surprising considering the last time we saw him a monster had his head in its mouth. Now comes the part that freaked me out so badly all those years ago. In the middle of a discussion about how they're going to get out of there or call for some kind of outside assistance without letting the government know where they are (they're military deserters, remember?), Jesse has some kind of melting fit, his eyes turn yellow, his fingers start fusing together, and he barfs about a gallon of nasty black sludge onto the table before dropping dead.

Now the rest of the group know they're in some shit. Acid to the left of them, monsters to the right, what are a group of AWOL soldiers to do? Mostly just wander around the place until the sorry-ass monster or the even sorrier giant rats pick them off, until it's down to just Jake getting tossed into a seemingly endless array of cardboard boxes by the monster until he kills it. But wait, there's more! The monster was somehow pregnant with a hybrid monster/human baby, which crawls out of the creature's body cavity and attacks Jake some more until he strangles it with its own umbilical cord. The stupid damn end. Ugh.

David DeCoteau gets ragged on a lot for being one of the worst directors of all time. This is one case where I am perfectly happy joining in with the voice of the majority. I can't imagine this guy has a fan anywhere, unless his gay hardcore porn has a following. Who knows, it might be really good as those things go. I can't really judge. But considering he managed to make being attacked by an awful fetus monster and strangling it to death with its umbilical cord not only not upsetting at all, but almost agonizingly dull, I have to say he's in the upper echelon. In all but the least talented hands, that should be at least a little unpleasant. He also managed to make a movie shot on 35mm film look like it was taped with his aunt's camcorder. How do you even do that? Even the dumbest, most technically inept low-budged features of yore, when they were made with real movie equipment, at least looked like real movies! I knew a guy in high school who wrote and recorded songs in his room on home editing software. Among the whole host of other things that you can imagine would be wrong with angsty music written by a high schooler trying to emulate Trent Reznor, he somehow managed to tweak his guitar tone just right so that it sounded exactly like a fucking kazoo. No, I'm not kidding. He thought it sounded all edgy and industrial. This movie is kind of like that. Fledgeling DeCoteau, given the money and resources to make his very first theatrically released 35mm feature, wound up blowing a kazoo.

Last week the world as we know it ended, and we felt fine.  This week, we become warriors of the wasteland and examine life after the crapocalypse.  Please send gasoline rations and M.R.E.s to:
Checkpoint Telstar: The Book of Eli
Micro-Brewed Reviews: Six String Samurai
The Terrible Claw Reviews: The Terror Within