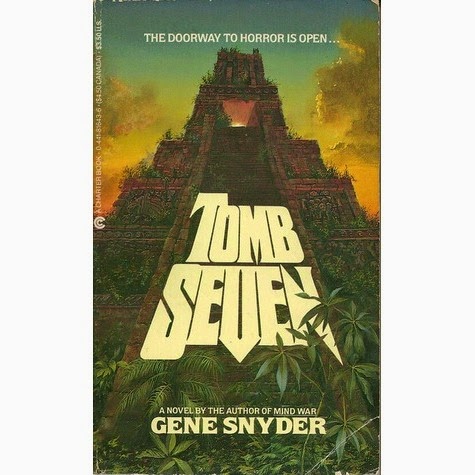 It's time for more shiterary...er, literary shenanigans. Somewhere in Michigan, Tim Lehnerer is pointing vaguely in the direction of Iowa and laughing and saying, “It serves you right!” I've detailed elsewhere my refusing to buy a copy of Flesh, which he tried to talk me into at Half Price Books on the B-Fest trip several years ago, on the grounds that it didn't have a monster on the cover, just a crappy painting of a lady and a hand. This resulted in me getting sniped with eight copies of Flesh throughout the next year's trip. This year at HPB, I broke from my own tradition and picked up a copy of Tomb Seven. The cover is an unremarkable picture of an Aztec pyramid, but get a load of this fucking back cover copy:

The Sacrifice
It begins as the American leader of the expedition,
a healthy, athletic scientist, dies of sheer
terror. It continues with a threat too
gruesome to be believed...

The Horror
Then the unspeakable evil takes hold. The earth
erupts, and a race of mummified giants is discovered
as the Russians and Americans race to steal
the awesome secrets of...

Now, I don't know about you, but to me, that sounds like a book I would love to read! You know what? I still would, because the book I read sure as fuck didn't have any of that awesome stuff in it.

Instead, what we get is the half-baked story of Welsh archaeologist Dr. Jason Farewey, Mexican psychic and archeology student Lupe Munoz, and...no, you know what? Half-baked is giving Snyder too much credit. This garbage is still batter in a mixing bowl sitting on the fucking counter because the author got bored and went off to read something interesting LIKE THE BOOK THE GODDAMN AD COPY MADE ME THINK I WAS GOING TO GET TO READ! Arrrrrgh! Ok, deep breath. In through the nose, out through the mouth. You can do this, Rags, get a grip.

All right, I'll let you in on a fact that will probably make it dawn on you instantly what this waste of dead trees and scared squid is actually about. It sure would have been helpful to me ahead of time. Gene Snyder is apparently one of those doofuses (doofi?) who buy into all that ancient aliens bullshit lock, stock, and barrel. I can hear your groans from here.

Dr. Farewey is your typical no-nonsense scientific skeptic-type, who gets called in to a dig in Mexico because they keep having cave ins and he comes from a mining background so he's really good and engineering tunnels that won't collapse and kill everyone. But there's a catch. He's going to have to swallow his skeptical pride and take Lupe the psychic with him. Not only does Jerry Tanner, the director of the Moreland Research Institute which is funding the dig, think Lupe can help him locate trapped diggers, he also believes she will be able to find more figurines like the one he shows Jason. Sculpted in gold with a precision that puts even modern metalworking techniques to shame, adorned with jewels from halfway around the globe that no Aztec or Olmec or Mixtec would have been able to get hold of, and representing animals they would never have laid eyes on, the artifact is a great mystery. Oh, and the gold is alloyed with titanium. Yeah.

So away they go to Mexico, predictably bickering the whole time about how Farewey needs to open his mind, and how Lupe is just a silly woman, until of course all their differences and antagonism add up to irresistible attraction and they start fucking every chance they get. Then the Russians get involved because of Cold War reasons, and everyone ends up racing to a finish line that refuses to generate any tension because the only party who has a clear goal is the Mexican government, who just wants the other two countries to go the fuck home and stop stealing all their cultural relics. I think somehow, discovering the treasure chamber full of fancy gold dolphins underneath the tomb will give whoever possesses them the power of...I don't know. Unlimited refills at Starbucks or some damn thing. Snyder had no idea what the hell was supposed to be going on, so how do you expect me to?

Every fifty or sixty pages, things would seem to be building to a crescendo, and I'd get all excited. Hell yeah, I'd think. All this boring, dated sexual politics and science-bashing is about to end and here come the erupting tombs and the mummified giants to stomp across the countryside tearing shit up! And then Jason and Lupe would have some sex in their hotel and another goddamn tunnel would collapse and we'd have to spend another few pages with the Mexican cartel boss who was trying to steal the gold to flood the market so he could buy a bunch of strong dollars for weak pesos and make a fortune or some such nonsense. Eventually it all just petered out, the tomb collapsed, and everyone went home empty handed. Well, everyone but Jason. See, Lupe cured him of his scientific reasoning, made him believe the truth of the secret origin of man, which was clearly engineered by aliens because Atlantis is real and pyramids are really hard to build, and changed him from a cynical hard-hearted chauvinist into an open-minded, sensitive modern man of the 80's. Baaaaarrrrrrrrrf.

No clear plot. No guts to even flat out turn it into a straight up alien encounter story. Plot threads like Lupe's ESP powers being a gift from our benevolent alien creators which manifests in a lucky few who represent the aliens' wishes for our ultimate evolution which are hinted at and go nowhere. It just putters along, its incoherent characters and motivations and ideas never building to anything, until it gives up with a sad little wheeze and the only thing keeping you from throwing it in the recycling bin in disgust is the promise of a few pennies' worth of trade-in value the next time you head back to the book store.

Oh, and that race of mummified giants? They find one skeleton – not a mummy, mind, a skeleton – that's a little on the tall side.

If any of you happen to run into Gene Snyder, punch him in the dick for me.

I'm sure as hell not posting a link to buy this turd burger, so instead, you e-reader types should snag this nifty book about the horror films of Hammer Studios by my friend Dave Thomas.