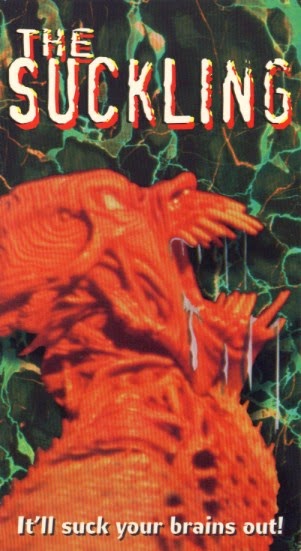 I can't think of any more gleefully gross exploitation movie plot than “aborted fetus gets flushed down a toilet, lands in a puddle of toxic waste, and turns into a marauding monster”. When I read about it in the coming-soon-to-video section of Fangoria years ago, I certainly knew I had to see it. I honestly can't remember where I eventually found a copy, although the amusingly inaccurate SCIENCE FICTION genre sticker on the box suggests an ex-rental copy. The sticker is of an unfamiliar style, so I assume I found it at one of the giant video tape liquidation sales that would pop up in the mall once or twice a year. Man, those things were a fucking goldmine. One day you'd go to get a giant cookie (really about the only reason to ever go to our mall anymore, except the cookies have gotten smaller and more expensive, so they're not the temptation they once were) and one of the vacant storefronts would have sprouted table upon table, row upon row of VHS castoffs from rental stores across the country.

We meet a boy and his girlfriend, whose names were barely ever spoken, and when they were they got absorbed into the muffled audio of the tape and the horrible screeching of the ancient elliptical machine I use to keep myself in some semblance of shape. They arrive at a huge, run-down house in some forgotten corner of Brooklyn, which does double duty as a whorehouse and illegal abortion clinic. The girl is adamant that she's going to carry the baby to term and give it up for adoption, and that she's only going to talk to Big Mama, the madam-cum(huh huh huh)-OB-G-DIE!-N, to placate her boyfriend. Of course, things don't go as planned or this would be a short movie, so Big Mama drugs her, performs the abortion (“Good lord, this is the biggest second term pregnancy I've ever seen!” she exclaims of the fetus she pulls out of the visibly-not-pregnant-at-all girl), and sends her simpleton Girl Friday to flush the thing down the shitter. The little bundle of unwanted joy lands in a puddle of toxic waste leaking into the storm drain from a barrel out behind the house (being from the rural Midwest, I just assume everyone has one of those in New York City) and of course immediately begins to increase in size and grow huge bone-shard praying mantis arms, like you do.

Back in the house, the girl is coming to from her Kool-Aid sedative, tension is rising amongst the secondary cast members like Big Mama's son Axel and the Black Ex-Military Security Guy Whose Name I Also Didn't Catch. One of the hookers goes with Girl Friday to flush her third abortion down the can when the prehensile umbilical tentacle of the Suckling shoots out of the toilet and decapitates Girl Friday. At this point, you're probably thinking we're in for some seriously wacky, tacky, disgusting shit. Would you believe me if I told you that, with the exception of a scene at the very end of the movie, we're pretty much done plumbing the depths of tastelessness the movie bothers with? The Suckling grows to full adult size in what turns out to be a pretty impressive monster suit considering how cheap this flick must have been, surrounds the house with an unbreakable placenta cocoon to keep its prey from escaping, and starts picking off the rest of the characters.

It's interesting that the first to die is the black guy. Interesting in that he doesn't die first because he's the black guy in a cheap horror movie. He dies because he's the only competent character and if he wasn't killed off everyone else would have survived. When the Suckling comes through the wall and grabs him, he's just disarmed the unstable Axel, gotten everyone to stop bickering momentarily, and is about to take his rightful place as leader of this motley group. Usually I write off observations like this as me giving too much credit to stupid coincidences in shitty movies, but there's just enough intelligence on display here to make me think Francis Teri was attempting to play with genre conventions a bit.

We're given enough back story on everyone else to know they're essentially useless. The boyfriend is basically just a kid, and despite coming up with some helpful suggestions like making a battering ram out of a weightlifting set, nothing he tries actually works, and let's not forget this whole mess is his fault to begin with; Big Mama is a clever enough woman to create her own little slum empire, but for all that it's still just a slum; the prostitutes, while shown to have some bonds of friendship and loyalty for each other, are still junkie whores at the end of the day; the one client who gets trapped in the house is a caricature of upper middle class white Republican snobbery, he talks big until he actually has to be brave and decent and then he's just a worthless pile of shit; and Axel is fresh out of his umpteenth stint in prison and is clearly a mentally unstable testosterone case. The only one in the whole place who stands a chance of fighting off the monster and getting everyone out alive is the ex-army security guard. It's hinted at that some shady stuff in his past has kept him from getting a real job despite his veteran status. That and, you know, he's black. He's clearly not happy with his lot in life, and is the only character in the flick to be a decent person in any way. So of course he has to die, because we want to see the rest of these miserable pukes killed off and the one competent, intelligent, genuinely good character is standing between them and the toxic waste sewage fetus. Bravo to Mr. Teri for that.

Of course, everyone eventually dies except for the girl, and she doesn't exactly escape unscathed. What happens to her, you really should see for yourself. I had to rewind it a couple of times to make sure I saw it right. Just don't have a beverage in your mouth at the point where the creature kills its father and starts advancing on its mother, because about two seconds later you're going to be choking on it.

Even on a dime store budget, fake blood can't possibly be that cost prohibitive. There's no way they spent so much on the monster they didn't have enough left over for a few gallons of corn syrup. A movie that starts out with the premise of an angry mutant aborted fetus killing those who have done it wrong should be absolutely the most disgusting and tasteless thing ever put on film. This thing should be Shaun Hutson level reprehensible. Unfortunately, once the monster reaches its full size, the horror elements become pretty tame and paint-by-numbers. There's very little gore, although there is a pretty nifty stop-motion severed hand crawling around at one point. It's obvious that Francis Teri was trying to lift this movie above the gutter-level expectations of its audience (the box states that the movie was compared favorably to Alien and Die Hard, but I'm guessing the only person who ever made that comparison was Teri). Most of the time I would applaud that attempt, and honestly there are times when the writing stops being terrible and the actors dial back the ham and it really does work for a few moments, but when you make a movie like this, you shouldn't strive above the gutter, you should fucking wallow in it. Go ahead and try to make a statement if you want, but don't make it with a polite note in carefully written cursive on classy stationery, splash it all over the goddamn walls with buckets of blood and slime.

I think maybe Teri realized that too late to do anything about the final cut, because the end credits are interspersed with a completely random and impressively gruesome FX scene shot outside the house, where two passersby witness a person staggering around the yard while the flesh melts off their skeleton. It's cool, but it has nothing to do with the rest of the movie and it's too little too late to make up for the dearth of grand guignol in the main body of the picture.

It's a fun flick and definitely worth a watch. Just make sure you go in with tempered expectations and are prepared for a large chunk of mostly bloodless, mostly monsterless, but not completely terrible character drama in between the crazy bits.