B-Fest 2015 Part 2: The Frogs Made A Miami Connection But They Couldn't Stop the Killdozer

Tim's B-Fest mix CD saw us to the Northwestern campus in good stead, and we got right in without even having to wait in line to pick up our tickets. I put my name on a list to re-sell my spare if someone called in needing an extra, but alas, no takers. Since I was Festing solo, I opted to carry just a small lunch cooler packed with high-density nutritious food like mixed nuts, fiber and protein bars, and a couple of Bolthouse smoothies, rather than a big cooler full of junk food. Traveling light was nice, as I didn't need much extra seat space for storage, and eating real food instead of candy bars and Chex mix makes a big difference in not feeling like utter ass at the end of the Fest.

After a delightful chat catching up with Dr. Megalemur, the lights dimmed and the show began. 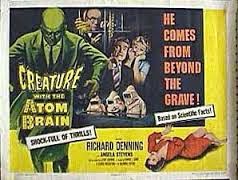 Creature With the Atom Brain: Some surprising brutality for a 50's flick, together with a quick pace and a fun script, kept the opening feature cooking along. It's still not a patch on an 80's Cannon or Chuck Norris actioner to get the crowd going, but I enjoyed it. Good use was made of the mix CD driving music gag. I'd still rather listen to the Roky Erickson song any day of the week though. 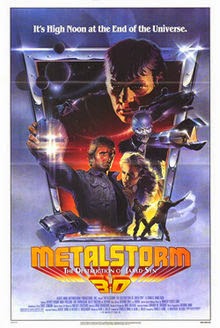 Metalstorm: The Destruction of Jared-Syn: As many of you are aware, this movie contains no metalstorms, nor does Jared-Syn get destroyed. What it does contain are a lot of really lame 3D gags, one reasonably cool cyborg, and a lot of boring bullshit. I'm not sure how Charles Band managed to make this much post-apocalyptic mayhem so dull, but he did. It almost surely would have benefited greatly from having been Italian.

I headed down the aisle a bit to watch this one with Paul and Skip. We eschewed our usual down-in-front seats this year to stay nearer the rear exit of the theater for the reason that it sucks dodging an obstacle course of sleeping bodies and coats and stuff in the dark when you need the restroom. It sucks even more coming back in when your eyes haven't yet adjusted to the light and you just have to hope you don't crush anyone's fingers or kick them in the face. The downside to that is most of our crew were still up front, so I jumped back and forth a lot. Also, Paul's amazing cookies were down there. Dude does great things with sugar and flour and eggs. 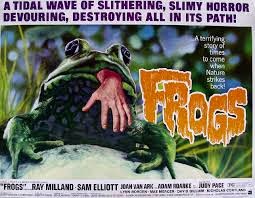 Frogs: That's more like it. This is one of those movies that I can enjoy equally from a riffing standpoint or entirely on its own merits. Yes, it's not strictly speaking a good movie. Then again, neither are probably 80% of the other movies I love. I care not a whit for your “quality” nonsense. Give me Ray Milland and Sam Elliot fighting toads and monitor lizards any day. I did feel a little ripped off that they shut the movie off before we got to see the little cartoon frog eating the hand at the end of the credits, though. People can be so impatient. 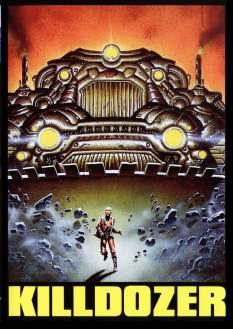 Killdozer: The entry I was looking forward to most this year, I hadn't seen this flick since I caught it on the Sci-Fi Channel as a kid on my grandparents' giant satellite dish. I was surprised to discover it holds up pretty well. Since it's a TV movie, I figured there would be lots of long boring stretches of talking since talk is cheap, but there is a ton of bulldozer action. There's a lot to like about this one, provided you like watching a giant bulldozer smash stuff. Which I do. Skip and I ended up talking through most of it, but it's an easy one to watch with only half your brain because there isn't much to follow. The bit where they bury the guy who tried to hide in a metal pipe and got run over amuses me because they either buried the smashed tube with him in it, or tipped the tube up over the hole and just let the guy sort of dribble into his grave. Either way it's pretty damn funny.

Another friend from home was in attendance this year, albeit not as a part of our regular crew of lunatics. Jacob came over from his seat between most movies to visit and give his impressions of his first B-Fest. I particularly enjoyed his reaction to...

The Wizard of Speed and Time: The stage stomp is Malorie's favorite part of B-Fest, so it didn't seem right to stomp without her. Even just watching everyone thundering away on the stage made my thighs hurt.

Plan 9 from Outer Space: It's been a few years since I've stayed in the theater for this one, and I felt like it was time again. The chants, the plates, the Bela, the Tor! The lineup for the last few years has been so good that any chance for sleep had to be snapped up, but this year there was a big stretch coming up later I didn't care about so I took the opportunity to reacquaint myself with Ed Wood's magnum opus. It's kind of like meeting up with an old friend you haven't seen for a long time. There's no awkwardness, no lack of things to talk about. You fall back into the groove as if you'd never been away. 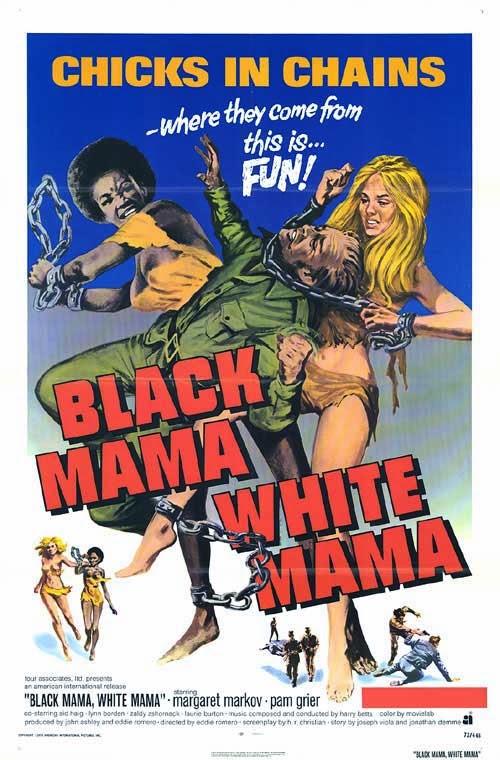 Black Mama, White Mama: I had completely forgotten I'd seen this movie. Playing in the traditional blaxploitation slot, I was not looking for an Eddie Romero women in prison movie. Sid Haig and Pam Grier never fail to entertain, but I started fading about an hour into it. Sid was already dead, I knew the ending was a bummer, and I was ready for some rest.

Heading out into the lounge area, I had already been beaten to most of the good sleeping spots but found what I thought would be an ideal place beneath a picture window next to a heating vent. I figured I would get some warmth and have a pleasant nap. Two hours later I woke up shivering because the heat was apparently not on and the cold air leaking through the window had found its way under my heavy coat blanket/pillow and froze me out. I stumbled blearily through the lounge looking for refuge and found that someone had abandoned one of the couches. Score! I didn't wake up again until 8:00 when the Starbucks crew turned on their obnoxious new age ambient music. The longest stretch of unbroken sleep I've ever had at B-Fest still didn't quite prepare me for the innocuous stupidity of... 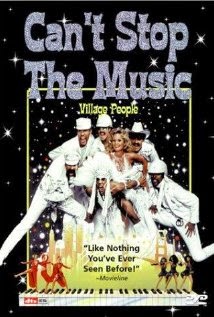 Can't Stop the Music: It's a disco musical dramatizing the fake story of how the Village People came to be. It's got full frontal nekkid schlong. It's two goddamn hours long. It's also a lot of fun at B-Fest. Sometimes the stuff you think you'd rather set your eyes on fire than watch can be the surprise standouts. Then you hit the 90 minute mark and remember it's two goddamn hours long. Even B-Fest itself decided it had had enough, when with about half an hour to go, a power outage not only shut the movie off but caused the screen to retract into the ceiling. Sort of the digital age version of when the film would snag and melt and break on the projector in past years. Sadly the DVD player remembered exactly where we were and we had to finish the movie once they got everything turned back on. 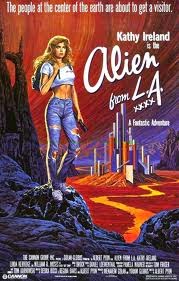 Alien from L.A.: An emotional roller coaster, going from fun to painful to fun and back again for maybe half the movie, before it settles permanently on painful and we all just twiddled our thumbs until it was over. All it really made me want to do was watch Danger Island again. I'm probably going to regret that decision when I get around to it.

Miami Connection: A terrible synth pop band who sing songs about friendship and tae kwon do, which they are also all proficient at, have to use their martial arts skills against a ninja drug cartel. Oh, and they're all orphans who live together in what appears to be a one bedroom apartment. It's certainly goofy and stupid and charming, but I think everyone else loves this movie a lot more than I do. Watching it with the B-Fest crowd greatly enhances its good qualities, but I don't think I could ever sit through it alone. 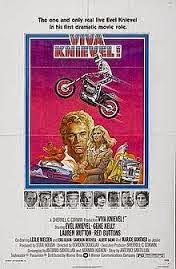 Viva Knievel: Evel Knievel and Gene Kelly must use the power of all-American stunt biking to defeat Leslie Nielsen and his drug cartel (sadly no ninjas this time, just some doughy white guys). Some cool stunts, as one would expect, but that's about it. It would have been nice to see the kaiju flick in its traditional closing slot instead of smack in the middle of my nap time. Granted I had watched Yongary just a week previous, but I'll take giant monsters over lame action movies any day of the week.

Just like that, it was over. Fond farewells were bid to those not joining us for the post-Fest trip to Portillo's (24 hours of nuts and granola left me ravenous for some greasy fried stuff). Tim made a lovely toast to absent friends, and it got us talking about how B-Fest is now only peripherally about the movies, and had we not made so many great and lasting friendships, none of us would probably still be driving to Chicago in the middle of January to watch some movies that we could just as easily watch at home. It's not a movie marathon any more. It's a family reunion.

May Tor bless you and keep you.
May Criswell make his face to shine upon you,
and be gracious to you.
May Bela lift up his countenance upon you,
and give you peace.
Posted by Bryan Clark at 5:09 PM