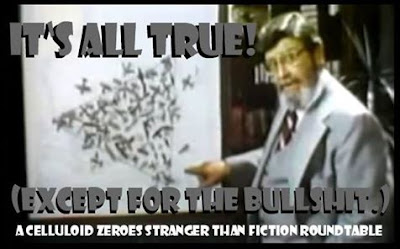 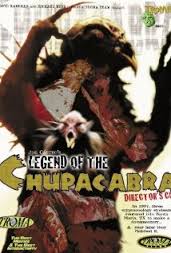 I've spoken many times before about the all-nighter movie nights my friends and I used to have back in high school, as I'm sure many of you did or do. We'd hit the local video store, the great Premiere Video (all hail!), and partake of the 5 for 5 for 5 (movies, dollars, nights) deal. Then it was off to the grocery store for three-liter bottles of generic Mountain Dew, doughnuts, pork rinds, and other things that your doctor will tell you never to consume an entire container of in one sitting if you want to make it past 30 without a heart attack. Ah, the days when I could make it past midnight without an energy drink.

Anyway, one night, despite our better judgment, we rented tonight's flick. Why against our better judgment, you ask? Well, it's a Troma movie. More specifically, it's distributed by Troma, which was the deciding factor in letting it through the gate. While I love the idea behind Troma in theory, in practice I find almost all of their studio output to be excruciating exercises in trying too hard. Except for Tromeo and Juliet, which is one of the greatest splatter comedies of all time, right up there with Peter Jackson's early work, and Terror Firmer, which isn't nearly as good as Tromeo but has a lot going for it. However, I love those movies mostly because of their comedic aspects (and one scene at the end of Terror Firmer that is intensely upsetting). Imagine my surprise when a movie featuring the Troma logo actually freaked me out.

Now, I know, I know. I can hear all the groans out there from those of you who have seen this movie. That's it, you're saying. Rags has finally flipped his shit. But there's something about grainy, out-of-focus, artifacted video footage that gets under my skin. The lack of fidelity allows the viewer's brain to fill in so many more gaps than a crisp, clean digital image does. It's the closest visual equivalent to reading a book, really. It engages the viewer in a way that no other film style can. The first ten or fifteen minutes of Legend of the Chupacabra is some brilliantly effective usage of this technique, showcasing how a talented filmmaker can make some really effective effects-driven horror on a budget. Indeed, the movie is like a feature-length pilot for the TV show Lost Tapes, which is my favorite cryptid show ever. Well, at least it's like that for the first fifteen minutes or so. Then things kinda fall apart.

After a really cool opening sequence shot mostly at a primate rescue preserve, we meet the meat. Maria Esperanza is a student of cryptozoology at the University of Rio Grande. She and her classmates/cameramen Pete Cortez and Daniel Webster are working on a documentary for their doctoral theses. Maria's uncle was murdered under mysterious circumstances recently, in the same area near the Texas/Mexico border where a rash of animal mutilations has escalated to the point where people's pets have been disappearing from their yards. Some of the more superstitious locals are saying it's the work of el chupacabra, and that's good enough for Maria and company, so off they go to the ranch of Mr. Jackson.

They're almost immediately confronted by the local sheriff, who wants them gone. Everyone saw them come through town with their cameras and their fancy city folk book learnin', and doesn't want them encouraging people to believe a monster is responsible for the killings. Of course, a run-in with the local curandera, who conveniently happened to be hanging out at the ranch, changes everyone's tune very quickly. This is a great bit of editing where we cut back and forth between one camera catching the escalating confrontation between Maria and the sheriff, and one camera following the curandera around the barn yard, muttering to herself and shaking magic charms. The tension of the argument keeps ramping up and up and it cues the viewer in to the fact that something bad is going to happen. You're led to expect that it's going to be someone getting arrested or shot, but the series of jumps back to the eerily quiet barn make it clear that something isn't quite right.

Then FUCKING BLAM! Chupacabra attack! Of course, the way the thing jumps out from behind a hay bale is more reminiscent of a local haunted house gag than any of the great jump scares of horror cinema, but the build-up is so effective that it made me jump out of my damn seat the first time we saw it. Even now I sort of brace myself for it even though I know it's coming.

Unfortunately, this is where the movie pretty much loses all that momentum it built up.

Knowing they were walking into a potentially life-threatening situation, Maria enlisted the aid of George “Army” Armistad, an ex-Marine and current gun-for-hire, to come along and protect them from any monsters they might encounter. After the chupacabra kills a deputy and runs off into the night, the situation immediately switches from student film to war zone and Army takes charge. Most of the acting in the movie is pretty bad, but this guy is definitely the worst. When he's calm and speaking in a normal voice, he's actually not terrible, but since most of the movie requires him to be Rambo Caricature Man turned up to 11, it's pretty hard to watch.

Switching from a spooky crypto-documentary to a straight-up monster attack movie also has the result of losing all that great atmosphere and ability to hide the shortcomings of your low budget effects. Now we just get a series of set pieces where we're given way too good a look at the well-designed but obviously rubbery chupacabra waggling its tongue at the camera and killing people. The gore is plentiful and well-done, and the haunting, minimalist synth score combined with the blasted landscape of the American Southwest shot mostly at night or at least very low daylight manage to hang on to enough of the atmosphere built up at the beginning of the movie to generate some tension in the moments leading up to the monster scenes. Of course, then you see the lumpy, ill-fitting creature suit and the woeful digital eye-glow effect and you're snapped right back to reality.

Being a mockumentary, the action is also interrupted periodically by talking heads ranging from Catholic officials to paleontologists, discussing what they think the chupacabra could be. The only one of them who has any damn sense, shockingly, is the priest. He states that people who say it's a devil are silly, that it's just an animal of some kind. The paleontologist is the worst. He shoots himself in the foot right off the bat by saying that theropod dinosaurs lived in the middle-Triassic (they first appeared in the late Triassic period, and T-Rex most certainly was not around then, as this buffoon states). Really, I should be saying, the script shoots itself in the foot. I'm sure this was just one of the director's friends who was given a bit part, and knew nothing about dinosaurs. This painful sequence is accompanied by a really terrible drawing that tries to make the chupacabra somewhat follow the body plan of a theropod, even though none of the creatures we actually see look anything like that.

Yes, I said creatures. The main suit, which features in most of the movie and gets hacked up in the ridiculous tacked-on autopsy at the end (this scene makes me almost physically angry because it's so goddamn stupid and the ad-libbed sounding dialogue makes me want to punch everyone involved in the face, even more so than the stupid dinosaur bullshit, because it absolutely ruins any last goodwill that great first reel built up) is the primary beast, but we also get a look at some weird simian thing during the pre-credits sequence, and a strange sort of chicken-chupacabra attacks some more farmers at the end.

Speaking of the pre-credits sequence, it decisively answers the question of the chupacabra's origins before it's even asked. It clearly shows the thing being created in a lab, where it kills a guard and escapes into the wild. So why bother having all the talking heads debating its origins if you've already shown them to the audience? That kind of thing should be used to make your viewers use their imagination and engage with the story instead of ask whey the action is always being interrupted by all these people they already know are wrong. I'd rather not know what the thing is at all, honestly. Throw some of that debate in there to get a conversation going with your audience and let that be the end of it. Leave it unresolved, so everyone can come up with their own ideas. It was also a mistake to include all that stuff about how the legend of the chupacabra has been around for centuries, because that just makes it seem like the government is blowing tax dollars creating actual beings based on mythological creatures just so they can set them loose and mess with people. Which...dammit, that's a much better story. You read it here first, folks, that idea is mine!

Ok, I gotta go write my million dollar screenplay. In the mean time, hit the links below and check out the research materials my fellow seekers of the unknown have compiled.

The Terrible Claw Reviews:
Chariots of the Gods
Cloverfield