I don't know why I keep setting my phone alarm when we go to this, like I'm going to sleep in and miss half the day. For one thing I can never sleep worth a damn in hotel rooms. Too much noise; too much light through the curtains; an unfamiliar bed; all these things conspire to prevent me from sleeping much past 6:30 or 7am. It's much the same at B-Fest, which is a much looser and more relaxed schedule of doing stuff. Theoretically I should be able to sleep til 10 every morning there and enjoy the complete lack of responsibility, but no.

Point is, I was awake well before the alarm went off Saturday morning, so we made it in good time to catch the first half of the Masaaki Tezuka panel. We skipped the second half because the kids really wanted to see Madzilla, the Make A Wish Foundation short film made for a little boy with leukemia whose wish was to be Godzilla. As much as I wanted to hear Tezuka talk about his Godzilla movies (the first part of the panel was mostly a biographical thing), I think this was worth missing it for. It's incredibly sweet, and you should definitely check it out if you have the chance.

We had an hour block before our next panel so we blew some money in the dealer room, where I got another stellar Bob Eggleton print, and a copy of Eiji Tsuburaya: Master of Monsters, signed by August Ragone. We went downstairs to check out the model room after that. There are some incredibly talented model builders who bring pieces for the contest, my favorite of which being the 3D reproduction of a print Bob Eggleton made for last year's G-Fest. 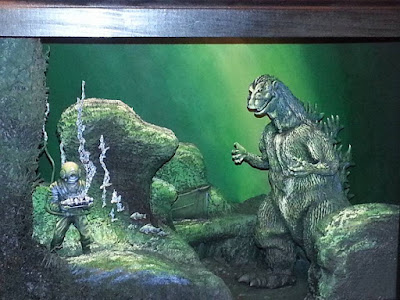 Next was 50 Years of Gamera with August Ragone and Kyle Yount, which was lots of fun. They attempted to get through the entire five decade history of Gamera in just an hour. They did not reach that lofty goal. I could listen to these to talk about monsters all day long; sadly the schedule did not allow that. The tangents started early and came fast and heavy throughout, and by the time they were halfway through Gamera vs. Gyaos, it was clear they weren't even going to get through the Showa era in anything like the detail they hoped for. But while it could have gone better for them, I don't think it could have gone much better for the audience, as it was funny and informative and pretty much everything you could ask for in listening to two experts talk about a giant flying turtle.

As much fun as 50 Years of Gamera was, the next panel was easily the most fun of the whole con. Kyle, Keith Foster, and one other fellow I can't remember presented Kaiju-Sized Avengers. This was a live, radio play-style reading of issues 23 and 24 of the Marvel Comics Godzilla title, accompanied by the individual panels projected onto a screen so the audience could follow along with the images. I really hope they do some more next year, perhaps with some of the more bonkers Dark Horse issues. My first reaction was wanting Art Adams's Godzilla Color Special, but talking to Kyle about it after the panel, he made the solid point that the story in that is too good, and it would be much better to go with more crazy material for more laughs.

After another hour of putzing around and checking out the video game room for Phoenix, it was time for what proved to be my other favorite panel of this year. Dr. Boss presented a panel called Japanese Culture the Kaiju Way, which was sort of a primer of some of the more basic aspects of Japanese culture for those who hope to visit some day. It was just like being back in class at Wartburg again, and that was quite a trippy feeling after ten years, in the best possibly way.

We caught a little bit of the live Kaijucast commentary for Godzilla vs. Monster Zero, but coming in on the middle of something is never that fun, so we took off to get some food so we could get back and grab a good seat for the costume parade. There was one excellent Final Wars Gigan, whose wearer had such a hard time seeing out of the suit that her dad had to pull her around the parade route on a cart. Other than that, the parade wasn't nearly as cool as last year. There were no less than four people who came through with store-bought Legendary Godzilla costumes. One of them was a little kid, so that's not such a big deal, but the others were older kids or adults, and man, if you're a grownup going into the G-Fest costume parade with a store-bought costume, you're bringing a toothpick to a bazooka fight. 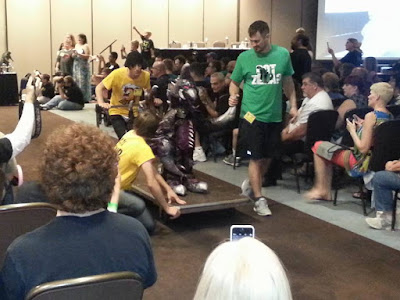 Things really wind down on Sunday, and so we had plenty of time to round up all our luggage, pack up the car, and get checked out before anything started. The only panels I planned on hitting were the post-concert Symphonic Fury panel, where they discussed what might be in store in the future (the thought of hearing Masaru Sato's Mechagodzilla theme played live by an orchestra makes me giddy), and the live Kaijucast episode with independent kaiju film historian Mark Jaramillo.

Phoenix wanted to spend more time in the video game room since he'd already blown his cash, so he played games with some new friends while Beez and I hit the dealer room one more time (she'd also blown all her cash but she's about as interested in video games as I am). Of course on the final pass through is when I spent all my damn money. I snagged a couple of great Tamashi Nations Ultraman and Ultraseven figures, but a stop by the Vampire Robots table is what killed me. They had a Vinyl Wars figure of Burning Godzilla custom made by Medicom, limited to 200 pieces, and it's the prettiest Burning Godzilla figure I've ever seen. I'm a sucker for that suit and any toys made from it (I also got the little transforming egg Burning G figure this year), so I couldn't pass this one up. You know it's a good figure when you drop $100 on it and don't even feel any buyer's remorse. 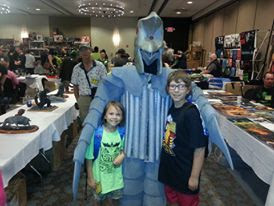 The live Kaijucast panel was excellent, and featured a couple of young Japanese filmmakers who are part of a small but passionate group working to keep the old-school tokusatsu spirit alive in Japan. One of them was even one of the last students of Koichi Kawakita's effects school. After the panel was over, I asked Mark if there was a chance of any of these great but practically unseen monster movies getting legitimate video releases in the states. He said it seemed hopeful, and I certainly want him to be right. More monster movies make the world a better place to live.

After that, there was just one thing left: Kaiju Konfessions. I'm not much of a one for dancing, but the kids love jumping around and singing along to the kaiju music videos presented by the indefatigable Stan Hyde. The most entertaining part this year was when he prefaced Miyarabe's Prayer from Godzilla vs. Mechagodzilla by holding up a little King Seesar statue. Everyone immediately dropped to their knees with their hands held up in supplication to the mighty Okinawan deity. His reaction was, “Oh, this just got weird.” 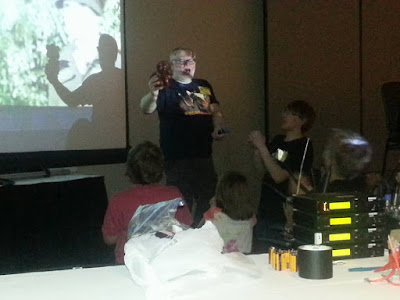 It's a fun thing to watch, but it's also kind of a bummer, because it means G-Fest is over for another year. If I have to sell blood plasma and body parts, I will keep going until I lose interest in Godzilla or die (and I think we all know which of those is going to happen first). If you've never been and are on the fence about it, get your ass off the fence and to the Crowne Plaza next July. The only regret you'll have is that you didn't start going sooner.
Posted by Bryan Clark at 6:39 PM