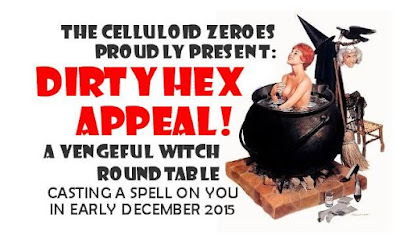 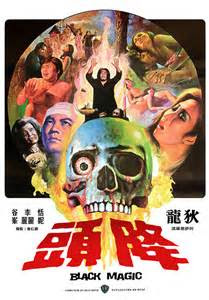 Back in the early 2000s, a company called Celestial Pictures Limited started distributing Shaw Brothers movies through Image Entertainment. They put out some pretty decent discs; not always a lot in the way of bonus features but the packaging looked good and usually the movies did too. They also had some nifty extras, like if you mailed in a receipt you could get free T-shirts and posters. I have a Bloody Brothers shirt around here somewhere, and a full-size reproduction of the theatrical one-sheet for tonight's movie. It's a boss poster. The movie? Well...

If you're anything like me, you see a movie called Black Magic with the Shaw Brothers logo on it and you're going to go into it with a certain set of rather high expectations regarding the amount of lunacy that is about to get poured into your lap. Most days, you would walk away with your expectations fully satisfied, but tonight's movie is just not up to the challenge for some reason. With no supplemental materials on the disc, and almost no online information that I could find, it's difficult to know why the typically reliable studio made such a dud out of what seems like a surefire slam-dunk idea. My guess is budgetary restrictions, as what few special effects are on display look incredibly cheap even by 70's Chinese exploitation movie standards, but I'll leave that to one of my more knowledgeable Shaw Brothers historian friends to determine.

Things start off promisingly enough, with a woman coming to see the wizard Shan Jianmi. Her husband is cheating on her, and she wants both him and his new girlfriend bumped off. Rather than hire a hit man or just do the deed herself, she wants it to be both more painful than anything she could devise and completely unprovable by the authorities, so a black magic curse it is. Shan slices up a dead body he just happens to have handy and cooks the head and a big chunk of flesh (very real flesh – by the look of it I'm guessing Feng Ku was hacking up a pig carcass in this scene) before making dolls of the cheating couple and forcing them to have a very confused magic-driven fuck before he starts stabbing them full of pins.

The next day, some neighbors discover the bodies of the two lovers and before long quite a crowd has gathered around to rubberneck at the nekkid dead people. A wandering Taoist priest happens by and immediately recognizes the work of his dastardly old enemy, so he sends a counter-spell zooming back along the invisible trails the evil magic left behind. Shan is nearly crushed to death when his shack collapses, but he manages to defend himself long enough to escape into the river.

We cut abruptly to what we won't know is supposed to be decades later until we see Shan again in a while. His hair is now gray, so presumably a good many years have gone by since the opening scenes, but I'm getting ahead of myself. Unfortunately, I'm terrible with Chinese names. The pronunciations and spellings are different enough that in a lot of cases, just because someone's name is said a whole bunch during the movie doesn't mean I'm going to have a damn clue who they are looking at the credits. This means there's going to be a lot of me describing people by character traits. I apologize in advance.

Xu Nuo is a handsome construction worker who has a loving but plain girlfriend who he is engaged to. When he arrives to pick up Plain Girlfriend from her teaching job, she gets quite angry with him because she finds an expensive makeup compact belonging to another woman in his car. Xu has another suitor, you see. A Predatory Rich Widow has set her sights on him, and dropped the compact into his car in a bid to make Plain Girlfriend jealous. She certainly makes a fuss about it, despite the obvious fact that Xu wants nothing to do with Predatory Rich Widow and is faithful to her.

Meanwhile, Broke Loser is making his umpteenth unwelcome attempt to win Predatory Rich Widow's affections. He's waiting by her pool when she gets home from trying to sabotage Xu's relationship, and she smashes the hell out of his car with a couple of big stones for his trouble. Meeting up at a noodle stand with his friend, Talks With His Mouth Full, Broke Loser learns of a wizard in the woods outside of town who might be able to help him with a love spell. Sure enough, it's none other than Shan Jianmi, and he's willing to help Broke Loser for considerably more money than the poor sap can afford. He manages to convince Shan of his ability to pay once Predatory Rich Widow is in love with him, though. She's loaded, and will be more than happy to give her new beau the money to pay the wizard.

Shan agrees to work the spell, and sure enough, just a few nights later Broke Loser is in bed with PRW and banging away with yuan signs in his eyes. His luck is about to run out, though. Shan knew he was unable and presumably unwilling to pay for the spell, so he designed it to wear off when the night was over. Broke Loser finds himself in the awkward position of having to explain that he hired a wizard to get him into PRW's pants, but once she gets over her disgust at having given up the goods to this greasy weasel she has an idea. If Shan's magic works on her, surely it will work on Xu as well, and she's got more than enough money to pay for a proper spell.

If you're thinking it's about time to gear up for some more magical craziness, get ready for disappointment. Aside from Shan squeezing milk out of a couple of womens' breasts (it's an ingredient for his magic potions), the movie becomes a mind-numbingly dull soap opera for the next hour and change, with Shan making Xu fall in love with PRW, making PRW give him some side nookie because he's starting to wonder why he's settling for a measley 100,000 yuan when he could just keep her and her fortune to himself, and finally casting a death spell on Plain Girlfriend, who is about to become Plain Wife.
Then Taoist Priest re-enters the picture, and we get the magical showdown we've been waiting the whole movie to see. Even then, it doesn't last very long and it's not nearly loopy enough to make up for the excruciating romantic drama we've been forced to sit through to get there. It does, however, have some pretty gross worms and slime pouring out of Plain Wife when the Taoist Priest exorcises the death spell from her, and has the distinction of featuring the shittiest looking animated laser beams I have ever seen in a movie. That's gotta count for something, right?

While it might not all be terribly interesting most of the time, the movie certainly does have black magic in it. Two different varieties, in fact. Taoist black magic, which is the variety the priest uses against Shan, involves lots of magic words and what translates as something like “ghost keeping”. Typically there are five main ghosts or spirits called upon to perform various different magical tasks. That's why all the shittily animated magical bolts summoned by the priest come from out of the sky while he's just making mystical hand gestures and muttering.

The type of magic used by Shan is called Gong Tau, and is considered to be much more dangerous and evil. It is more concerned with making noxious concoctions out of ingredients derived from plants, animals, and insects. These potions are added to food or drink, as in the movie, although people believe that in practice, more powerful practitioners of Gong Tau can actually make the essence of the potion travel through thin air and enter the victim's body that way. Spells inflicted with Gong Tau can be exorcised through a painful and rather icky process which often involves the victim barfing up large quantities of bugs or worms, so the slimy puddles of worms in the movie are actually an authentic part of Asian black magic lore, not just an added extra bit of nastiness like Fulci and his maggots. Gong Tau spells can also be removed by rubbing a chicken egg on the victim's body, which absorbs the spell and is often found to be full of worms. I didn't find any mention of stabbing a piece of hollow bamboo into the victim and tapping them like a Vermont maple full of mucus and bugs though, but that is definitely more cinematic and interesting than an egg. Words of power written on a special type of paper, which is often yellow, are also a common practice in this type of magic, which is why Shan is plastering the things all over his shack when the priest tries to destroy him at the beginning of the movie.

So there you have it. If the women don't find you funny, they should at least find you educational. Hit the links below and enjoy what the rest of the cinematic coven have cooked up in their celluloid cauldrons.