This year my original B-Fest crew was reunited in the theater for the first time since 2002, although we didn't make the trip together. Hard to believe it was fourteen years ago we first set out with no plan and no money, only a vague idea of where we were going, watched 24 hours of delirious b-movies and then had an even more delirious drive home immediately after the last set of credits wrapped. Fistula and Ferox arrived Thursday night, but I rolled out Wednesday morning this year. After getting my car unloaded and receiving another delightful box of books from Tim, at the behest of Jacob Smith and Natasha Haney we headed to a wrestling themed burger joint called the Squared Circle for supper. I have no strong feelings toward wrestling one way or the other, but I do have strong feelings about delicious hamburgers, and in that regard the place didn't disappoint. Their idea of what johnny corn is differed from any other experience I've had with it, but if you ever wondered whether or not deep-frying corn on the cob and then drenching it in garlic butter was a good idea I can assure you it is.

A post-dining trip to Myopic Books yielded up one of John Norman's even-numbered Gor books. For some reason, every time I run across these things in the wild, they're always the odd numbered ones. Now I have 1,3,4,5, and 7. They also had volumes 10 and 13 on the shelf, but I suspect my journeys through the land of Gor aren't going to get that far so I left them for some other Cabbot (Cabbot! Cabbot! Cabbot!? Cabbot? Cabbot!!! Cabbot! Cabbot. Cabbot, Cabbot!?!?!) fanatic to enjoy.

Thursday saw us wandering over to Seven Brothers for breakfast, and I finally stopped and got some pastries from the bakery we walk by every year and I always say I'm going in but never do. Turns out I'm a moron for not having done so earlier, it was delicious. Then to the L station with Captain Telstar (he's gotta teach stuff), Kelvin Hatle, Melissa Kaercher, Lisa Mary, and first time Fest attender Bill Smiley to grab a train to a train to a bus to the Lincoln Park Zoo. As with the Brookfield last year, most of the large outdoor animals were in winter storage, but there was plenty of stuff inside to look at. The otters were hiding, but I got my cute fuzzy fix when I turned the corner and found myself face to face with a fennec fox. I think my dog Richard needs one to pal around with. 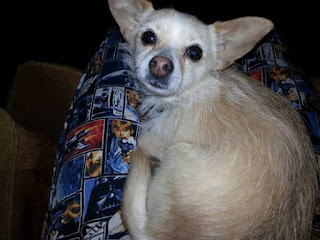 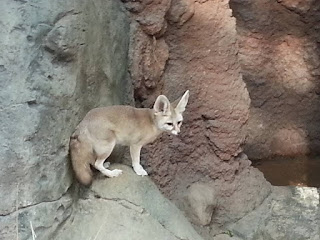 I also got to see a gorilla take a whiz from 20 feet off the ground, a baby Colobus monkey annoying the hell out of its parents by using their tails like tire swings, and some of the rarest birds in the world. 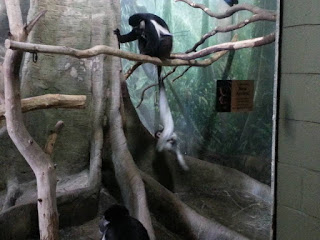 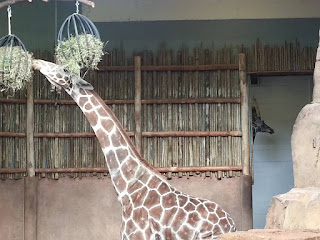 We missed out going to Glen's Diner, the phenomenal seafood place we hit a couple of years ago, because we got a late start and had to be on the train back to the hotel by 5 before our transit passes expired. The zoo left us with not enough time to eat downtown, but just enough for an impromptu ramble through a store called Hollywood Mirror that we walked past on the way to the train station. It's a vintage clothing/memorabilia/toy store, with a heavy emphasis on the clothes. Not being into this kind of fashion (if it doesn't have a cool band or a monster on it, it's probably not going in my closet), I was content to not move far from the door and just look at the fiberglass hammerhead shark on the wall until I noticed everyone clustered in a corner on the opposite side of the store. Then I realized that what they were looking at were some display cases that contained a dazzling array of Ultraman and Kamen Rider figures. Uh oh.

I wound up with a small figure of Chandora from Ultraman and a 6 inch Bandai figure of Dino Tank from Ultraseven, both very reasonably priced. After paying, I noticed another customer digging through some crates on the floor. What the hell, I thought, and started digging too. I asked how much the stuff in the crates cost, and trying not to let on I was too excited, I wound up getting a figure of Nurse, the weird golden dragon robot/UFO thing from Ultraseven for fifty cents! My theory is that because it looks so unlike any other Ultra foe, the owners didn't realize what it was and just tossed it in with all the broken Power Rangers and old Happy Meal toys. Whatever the reason, that score made up for the lack of fresh catch fish in my belly.

On the ride back, someone asked Tim and I if we were brothers. In some alternate universe, I'd like to think we are.

We grabbed a bite at the Palace, a killer Chinese place in walking distance of the hotel, and then went back to change into our hideous jackets for the Hala Kahiki. Since the place is a throwback to the jet set age when people thought Hawaiian kitsch was a legitimate style of interior decorating, Tim had the idea that as many of us as possible should wear horrid old suit jackets and ties that look like they were made from various types of upholstery. He found several jackets in my size in Michigan thrift stores, but by the time I had made my choice from the photos, my top pick was gone. Sometimes things work out, though, because when he went back to pick it up, in its place was this nuclear meltdown of a jacket.

It wound up being a little tight in the shoulders and short in the sleeves, which just added to the awfulness. Capping it off was a tie that I'm pretty sure began life as someone's great aunt's couch, with a color scheme that made it look like I'd limited my diet to nothing but brightly dyed children's cereals for the last month and then vomited down the front of my shirt. Fruity drinks were consumed, good times were had, and then back to the hotel to drink and watch movies in the lobby.

Back in November, some friends and I went to Chicago to see King Diamond play the Aragon Ballroom. One of the best shows I've ever seen. We stayed at the Best Western then too, and the desk clerk remembered me. He was supposed to have gone to the show himself but got called into work at the last minute. On the way home, we stopped at a liquor store where I picked up a bottle of beer called Absence of Light, which is a chocolate peanut butter stout, and is one of the best beers I've ever had. We hit another Binny's on the way back from the train station and I bought them out of Absence of Light, which I then got to share with and make converts of Mike Bockoven and Matt Campbell while we all watched Tarkan vs. the Vikings in the lobby and had fun blowing the clerks' minds with that and Gymkata.

Thence to bed, for on the morrow we would watch movies historic on the B-Fest road.
Posted by Bryan Clark at 2:39 PM