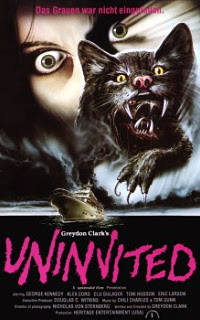 George Kennedy has died. Another living legend lost to us while Republican politicians who make the woods witch from Pumpnkinhead look like the epitome of health and vitality continue to corrode the morals and ethics of our country by promoting family values while sending dick pics to terrified underage sex slaves to fritter away the time before they vote down the democratic senator filibustering for all he's worth to allow the American people to get more than a head cold without going bankrupt from medical bills.

This artless segue brings me to my next point, which is that this is definitely a Republican horror movie. So often genre flicks are accused of having a right wing bent. Have sex out of wedlock and you die, etc. Well, this flick is one in which the human villains are multimillionaire capitalists who get busted for embezzling tax-free money from the banking system and go on the run, only to have a mutant creature hunt them down and kill them one by one. Defraud out of taxlock and you die. Donald Trump's worst nightmare, except instead of financial lawyers, the thing hunting his worthless carcass is an escaped lab animal; a cat made out of cancer to be precise. But I'm getting ahead of myself.

Two scientists (one of whom is played by our auteur du crap himself, Greydon Clark), are about to perform exploratory surgery on one of their lab animals. It seems the floofy orange cat has developed a strange tumor as a result of whatever experiments they had been performing on it, and they need to find out of it's benign or not. The cat, however, has other ideas, and skedaddles as they're transferring it to the examination table. They panic and immediately order the entire building to be put on radiation lock down. You'd think if they were going to be working with such a dangerous subject they'd be wearing some kind of protective gear, or at least bother to close the goddamn lab door, but I guess that's why I'm not a scientist.

When radiation-suited guards finally corner the cat (which has been yowling non-stop since it first appeared on screen in that way that anyone who has ever spent any length of time around cats knows they never actually do) in a stair well, it barfs up another cat, this one all lumpy and horribly deformed, which slaughters every one of the heavily armed men in a matter of seconds. Yes, you read that right. The tumor growing in our malicious moggy wasn't just any old neoplasm, it was a whole new creature, able to detach itself and leave its host to attack, then crawl back inside Mewford T. Pusser when its grisly errands are done. Despite the “radiation lock down”, which amounted to little more than closing the doors of the parking garage, the kitty manages to escape after re-ingesting its passenger, which looks not a little bit like Donald Trump before his concubines slather him with fake tan lotion in the morning like the Warboys suiting up Immortan Joe.

Meanwhile, we meet Bobbie and Suzanne, two girls out on the town. They appear to have run out of money in a fancy part of whatever city they're supposed to be in, and find themselves caught in the rain carrying what little luggage they have and dressed in little more than bikinis and shawls. Coming upon the inviting lights of an upscale hotel, they decide to go in and spend a few minutes in the lobby out of the rain until security kicks them out. Instead, they meet the owner of the hotel Walter “Wall Street” Graham. Credit to actor Alex Cord, Graham seems convincingly and genuinely nice to the girls, until he invites them to a party on his private yacht the next day. That sets off some scumbag alarms, all right. He's called away from their dinner to deal with some bit of business, and the girls are left to their own devices in the hotel until the following day.

That bit of business arrived at the hotel in the form of George Kennedy, riding in the coolest old limousine you've ever seen. Renting that thing and paying for Kennedy's appearance must have been half the budget. As it turns out, Graham is involved in worse things than trying to trap a couple of young girls on his rape barge. Mike Harvey (Kennedy) is pissed because he and Graham have been embezzling a fortune from somewhere or other, and their man on the inside who has been facilitating the operation is getting cold feet. They execute the poor bastard by drowning him, and decide that it's time to get out while the getting is good.

The next day, the girls meet a trio of guys at a beach front bistro and invite them along to the party as backup in case Graham tries to get handsy with them. Needless to say, Graham isn't pleased with the extra party guests, Harvey even less so. They're about to send them back to shore in the launch with Graham's right-hand man Albert, when they are informed that the SEC are onto them, and since the authorities are on their way right now, there's no time to get rid of the extra kids. They'll just have to make like life is peachy and do away with the surplus cargo once they're in international waters. Of course, we wouldn't have much of a movie if they just took off on the boat and that was the end of it. There's one more stowaway on that boat, and as everyone is about to find out, it's a lot more dangerous than a couple of slimy businessmen.

I was surprised to learn that Greydon Clark has only directed 20 movies, at least according to the IMDB. I always thought he was a b-movie filmmaker of the Fred Olen Ray variety, cranking out a movie or two every year, with hundreds to his name. Of course, Ray's movies are generally far more entertaining than Clark's, but there are a lot of super prolific b-movie directors whose output is considerably worse. I don't know why he hasn't gotten more work. He doesn't have a particularly unique style – his movies are virtually indistinguishable from any one of thousands of other direct-to-video movies from the 80's and 90's – but the movies of his that I've seen are produced with a competent and workmanlike level of skill. Sure, there are all the usual pitfalls of low budget film making; sometimes shoddy effects, less than stellar performances from some of the actors, continuity problems (I'm looking at you, sheriff who gets shot and slides down a wall twice in Final Justice), etc. But on the whole, Clark's movies are a lot easier to sit through than some of the crap we've all endured.

This movie is no exception. The various puppets used to represent the creature are uneven at best. The thing changes size throughout the movie, but I think that was intentional rather than a continuity screw up. The bigger hand puppet versions that have a little more detail look a lot better than the little one that comes out of the other cat's mouth, and the less said about the toy boat sinking at the end, the better. Where the FX really stand out in this flick are the gore scenes. The best one is when the creature rips Mike Harvey's heel and Achilles tendon to pieces, but there are several other bits involving lots of spraying goo and pulsating air bladders that look pretty gnarly as well.

The performances, even from the actors playing the kids, are pretty decent. Eric Larson as Martin is the best one of that bunch. The rest of the younger cast manage not to veer too far into, “Holy shit that guy is so annoying, please kill him RIGHT NOW!” territory, but some of them do nudge up against it from time to time.

Of course, the best of the lot are Alex Cord, Clu Gulager, an George Kennedy, although George seems to be pretty bored through most of the movie, probably just waiting for his check to clear so he could get the hell out of there. He does perk up some during his final scenes, where the cat monster damn near tears his foot off, and he winds up poisoned by its bite and dying in agony with pulsating boils oozing pus all over his body.

I know we're supposed to be doing this as a tribute to Kennedy, and this counts in that it is a movie which he appeared in, but damn if Clu Gulager doesn't steal the whole show. Of course, he steals most of the shows he's in. I fucking love that guy, and you should too. He's great here as Alfred, the put-upon manservant of Walter Graham. During the parts where he's forced to do awful things against his will, like help with murders and disposing of bodies, he injects some real pathos into the role and you feel sorry for him. Later on he gets drunk to try and forget the things he's seen and done and will likely have to do again in the future, and his goofing around is a nice reprieve from the rest of the movie until his super-hammy death. He also for some reason is wearing this ridiculous set of false teeth that stick out of his mouth, and between that and the way he plays the part, Alfred puts me in mind of what would happen if Harold from The Red Green Show wound up being a criminal henchman.

There you have it. I'm sure some of my compatriots will delve deeper into the story of the man, the myth, the legend, George Kennedy, taking a look at some of his bigger and better roles and with a greater knowledge of the action and Western genres he more often than not was known for working in. We here at Cinemasochist Apocalypse just wanted to balance that out by reminding you that he also once got mauled by a lumpy sock puppet cat monster. You're welcome.

This review is a part of Petroni Fide, a round table tribute to the late great George Kennedy. Hit the links below to see what my cohort of Kennedy fans have to say about George's other appearances.