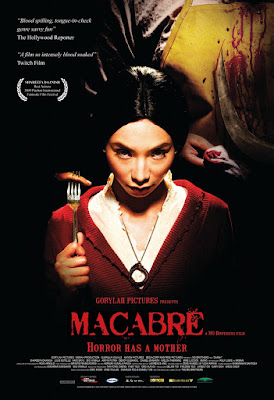 Written and Directed by the Mo Brothers, expanded from their short film “Dara”
Starring:
Shareefa Daanish as Dara
Julie Estelle as Ladya
Ario Bayu as Adjie


Tonight’s movie begins at a going away party for Adjie, an apparently upwardly mobile thirtysomething Indonesian man who has just taken a high-profile job in Australia. Some of his friends have thrown him a party at the restaurant where his estranged sister Ladya works. It seems their parents left a sizeable inheritance behind when they died, and sexism being what it is in traditionally Muslim countries, Adjie got the whole kit ‘n kaboodle, resulting in some bad blood between the siblings. Adjie has tried to bridge the gap before, and is doing so again now, offering Ladya a check for what appears to be quite a large sum of money, but she stubbornly refuses, claiming she can make her own way in the world.

After the party, the group heads for the airport to see their friends off. On the way they pick up a hitchhiker named Maya, who claims to have been raped and needs a lift to her home, which isn’t far away. Once there, Maya’s family insists on showing their gratitude by having the group stay for dinner. Why yes, the wine is drugged. And what is that strange, thinly sliced raw meat the family is passing around? If you guessed Soylent prosciutto, you might be onto something.

Once the effects of the drugs wear off, various members of the group find themselves separated from the others, locked in rooms, and in one especially unpleasant case strapped to a butcher’s table with a chainsaw descending on his throat. A particularly feisty captive named Eko manages to escape and find a van full of cops to bring back to the house to rescue them, but by then things have gone from bad to, “Why does that tubby fellow in the apron have a pencil sticking out of his eye?” and it’s going to get a whole lot worse before it gets better.

I’ve seen a lot of comparisons drawn between this movie and Texas Chainsaw Massacre, and while that’s certainly a fair point, I would say the similarities are one step removed from direct influence. Specifically, this movie resembles Chainsaw less because of direct influence than because it resembles Rob Zombie’s carnival funhouse version of Chainsaw, House of 1000 Corpses, but with all the tacky grease paint washed off. The family in Macabre are certainly weird, but they at least maintain a thin veneer of sanity for a while. The dinner scene is where things start to get truly creepy, not where they reach the pinnacle the horror has been building to. Dara’s house is an H.H. Holmes-like labyrinth designed for murder at maximum efficiency, not some run-down shack in the woods. It even pauses the madness briefly when cops come snooping, who are dispatched in short order and then it’s back to the regularly scheduled carnage.

My first thought as I watched this movie was, “Hey, the title uses the same font as the Chicago-based murder metal band Macabre!” My second was, how the hell was something this deranged made in Indonesia, a country notable for its strict regulation of entertainment? The answer to that question requires a bit of history. Well, ok, it doesn’t require it, but I’m going to talk about it anyway because I love that watching this kind of ridiculous trash can actually lead you to learn things.

The first domestically produced film from the Dutch East Indies was shown in 1926, and just as the infant film industry was learning how to walk, it was smothered in its crib by the Great Depression. Then, when the film market was recovering from economic collapse in the late 1930s, WWII broke out and the occupying Japanese forces commandeered it as a wing of their propaganda machine.

Once the war ended and Indonesia had gained its independence from the Dutch colonial government, the Sukarno regime began veering further and further to the left, and used the country’s film industry primarily to create pro-communist and anti-Imperialist propaganda, which pissed off the increasingly restless Islamic faction in the country to no end. Since many of the high-ranking Indonesian military officials were Muslim, this, as you may imagine, ended poorly for Sukarno. In 1967, a major-general named Muhammad Suharto led an anti-communist coup and took over the country in one of the nastiest mass murders this side of the holocaust.

While they may have been subject to an incredibly strict religious censorship code, at least Indonesia’s filmmakers were finally able to shoot something other than propaganda shorts. Many films came out of Indonesia during Suharto’s 30 year rule, reaching the most fruitful period of production in the 1980s. The eruption of colorful exploitation films to come out of Indonesia during this time made up for the fact that they couldn’t show any sex or nudity or extremely graphic violence by being some of the most absolutely bat-shit insane things the genre has ever seen.

Suharto was overthrown in 1998 as his policies were leading Indonesia into another economic collapse, and the Reform period began, ushering in a much more liberal socio-political climate which allowed movies to talk about things like sex and religion and hacking people up for barbecue. Not long after Indonesia’s cinema started catching up to the rest of the world, heavier and heavier taxes began to be levied against foreign films, like big-budget blockbuster fare from America. As smaller local theaters became unable to screen the big ticket movies people wanted, many had to close their doors, and before long it got to the point where, if your local theater didn’t get a high profile foreign movie, your only option besides trying to obtain increasingly hard-to-find bootleg DVDs was spending around the equivalent of $100 US to fly to Singapore and catch a screening.


It seems that Indonesian filmmakers have adapted to this new opportunity to fill local screens, and in recent years home-grown movies of significantly higher quality, like Macabre and the mind-boggling whirlwind of ass-kicking that is The Raid: Redemption, have been seeing release and even gaining acclaim abroad.

I highly recommend giving this one a look. I certainly enjoyed the hell out of it. As the rest of the Attack of the Killer Podcast crew and I were discussing on our forthcoming cannibal episode, Macabre doesn’t present the viewer with anything new, but you don’t need to reinvent the wheel to make a satisfying movie. It’s the boundless energy and enthusiasm with which the familiar tricks are performed that makes shiny again that which was old.