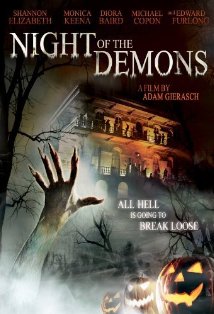 Have you ever finished watching a movie and thought, “You know, I really wish that had been worse”?  That’s what happened to me this morning.  I had my angle all set in my head when I sat down to watch this remake of the minor 1988 cult hit.  I was all ready to sit down at the computer, overflowing with generosity: “You see how much I love you all?  I made this crappy remake my last movie of 2010, the first start-to-finish good year I’ve had since 2007, something that should be celebrated with greatness but instead, for you, my two faithful readers, I made an experience of suffering for your entertainment”.  But the plan backfired.

Angela is throwing the Halloween party to end all Halloween parties in the Broussard House, a place known for six disappearances and a nasty suicide (which we get to see in the opening sequence which delivers more entertainment than the whole rest of the movie) 85 years ago.  Something went wrong at a séance held by Evangeline Broussard, and she wound up jumping from the top story with a rope around her neck, which instead of simply snapping her neck, ripped her head clean off her shoulders.

Angela is counting on the legend and the mystery to bring in every goth kid in New Orleans, and indeed it works until the cops shut the party down on some bullshit permit (I have experience with something similar, remind me to tell you some time).  After the cops leave, Angela and six other people remain behind to clean up (or sober up or find the drugs they dropped down an air vent in the raid), and a supernatural force locks them in the house and starts picking them off and possessing them in increasingly gooey ways.  The remaining human characters discover there are seven demons who were banished from Hell, and have to possess seven living human bodies on Halloween night in order to take over the world.  It’s implied these demons are so badass that even Satan couldn’t handle them, and yet when presented with a plethora of opportunities to bite and possess a victim, all they do is throw them into a wall and shake their drooly, misshapen heads around growling at them.  If that’s what passes for unacceptably vicious demon behavior, I’m just going to pop down to Hell real quick, give Satan a wedgie, and steal his lunch money.  Stay put, I’ll be right back…aaaaand I’m back.  Turns out Satan brown bags it and he had egg salad today.  Ew.  Ashtaroth gave me a Baby Ruth, though.

And that’s it.  Spam In A Can whittled down to the bare bones.  The original was a somewhat dull but acceptably entertaining waste of 90 minutes, and this remake is pretty much the exact same thing.  It’s not good enough to be great, and it’s not bad enough to be great, but it’s competent enough to keep you with it til the end.  There are some nice touches that shine through the mediocrity, such as the introduction of Jason and Dex.  Usually the hunky man meat characters in these things are rampant douche bags, but we meet these two preparing for the party in Jason’s apartment, and when they spot an older kid with no costume trick-or-treating and taking candy from the younger kids, Jason shoots him in the back with a paintball gun from the balcony and runs down to the street to continue pelting him while all the little kids take their candy back.  And while Edward Furlong looks more like a frumpy child molester than ever, he is still a capable actor and much more talented than any of the other people in the movie.  Which, come to think of it, doesn’t so much make him look good as it makes everyone else look bad.

One aspect of remaking a movie famous for an icky or shocking FX set piece is, of course, you have to trump that sequence.  While I don’t think the sequence the original flick is famous for is really all that shocking at all (Linnea Quigley shoves a tube of lipstick into her breast, for those who haven’t seen it), they nonetheless went hellbent for leather to make it more memorable here.  Possessed Lily confronts Jason in a bathroom, shoves her lipstick into her tit, wiggles around a bit, and pulls it out of her vagina in a deluge of blood and gelatinous slime.

While the movie is professionally competent, it never really grabs you even when people’s faces are literally being bitten off.  When Edward Furlong’s line delivery grabs your attention more than a demon chick doing magic tricks with her boobs hanging out and fountaining blood from her crotch, you have failed.
Posted by Bryan Clark at 10:38 AM