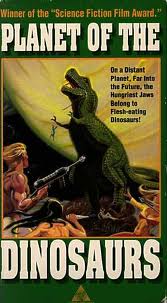 
As with most sane male (and plenty of female as well) children, I loved me some dinosaurs.  Still do, in fact.  As a result, I was a pretty easy kid to buy presents for.  Any cheap plastic dinosaur toy was a plethora of adventures waiting to happen.  Everyone who watches the show Big Bang Theory probably gets the most kick out of the comic book and physics references.  My favorite nerd reference in that show is Sheldon wearing a t-shirt with a picture of what must be one of the top three generic T-rex toys of the 1980’s, which Google image search was most uncooperative in providing me with a picture of (although laziness and Jim Beam may also have been factors in this most unsatisfactory search).  Well, that and his shirt portraying the silhouettes of all the major Toho kaiju.  Any movie with the word, “dinosaur” in the title was an instant win.  So it was that one Easter, my basket contained, in addition to candied pagan fertility idols, a VHS (and I have gray hair too!) tape of tonight’s movie.

This flick is a strange dichotomy of ultra-(as in Prisoners of the Lost Universe)cheap production design, location shooting that would have looked dated and obvious in a Rocky Jones: Space Ranger serial, and thoroughly impressive and detailed stop-motion dinosaur effects that alone propel the movie way ahead of the pack as far as cheap 70’s SF movies go.  That childhood attachment to this movie makes it a solid watch even today.  Someone first encountering this flick through Netflix after reading this review might think some first-rate hallucinogens are involved in my love of the movie (tried them, didn’t work, sticking to alcohol), but it’s simply a combination of the “you had to see it as a kid” effect and a deep-seated love for prehistoric monsters.

An unspecified catastrophe results in the space ship Odyssey dropping out of hyperspace and self-destructing.  A handful of the crew and passengers escape in a shuttle and crash land on a planet that they shortly discover is not only far from any mapped star system, but populated solely by creatures very similar to that of Earth’s prehistory.  Our cast of characters consists of ship’s captain Lee, his second in command/lover Nyla, soon-to-be-perpetually-shirtless-eye-candy-for-the-ladies navigator Chuck, communications officer and soon-to-be-mosasaur-chew-toy Cindy, engineer Jim (Papa Jupiter himself, James Whitworth), random officer guy Mike, nurse Charlotte, and vice president of whatever company owned the ship Harvey and his secretary Derna, whose job it is to provide the scantily-clad eye candy for the guys once Cindy is dead.  Well, until she gets eaten by a T-rex anyway.

The plot consists of lots of walking and “rest periods”, until Lee’s whiny, wimpy, totally ineffectual leadership gets a bunch of people killed by a T-rex.  Then the few holdouts decide to listen to Jim and kill the damn dinosaur so they can build a nice farm.  But really, who cares.  We’re all here to see the dinosaurs, and the movie certainly delivers in that regard.  We get the main baddie T-rex, along with an Apatosaurus, a pair of Ornithomimus, what is elsewhere described as an Allosaurus but is nowhere near big enough so I’m going to say it’s a Megalosaurus, a Centrosaurus that mercifully kills Harvey less than halfway through the movie, several Stegosaurs, a Polacanthus with some misplaced tail spikes, as well as a giant spider and a creature that is openly a reference to Ray Harryhausen’s masterful Rhedosaurus.

Whatever else you may think about the movie, you certainly can’t say it doesn’t provide the dinosaur action.  As the stories have it, a huge majority of the budget was spent on the Saturn Award-winning dinosaurs (although some of their eyes are inexplicably [well, not so much inexplicably as inexcusably considering the tiny budget] the same color as their hides--even a million dollars in 1978 would only buy you so much), to the point that the actors had to sign a waiver for a portion of their salaries until the movie made its money back.  At least one of the cast, Derna Wylde, reported that she was never paid the remainder of her fee.

Everything about this movie has an undeservedly heightened sense of gravitas for me based on the countless childhood viewings.  The weirdly echoey dubbed dialogue; the inexplicably catchy farty synthesizer soundtrack; the obvious-to-an-adult cheesy character moments like the remaining survivors singing “Auld Lang Syne” upon discovering their place on the plateau and breaking out the homemade hooch Mike has concocted (which has a lasting impact on me and which I blame for my inability to hear that song with a dry eye...not that it's just a good song composed by a great poet or anything...).

Upon watching this flick now, every single thing about it aside from the dinosaurs screams low-budget cash-in.  Well, cash-in seems an inappropriate choice of words considering the lack of big-budget space opera survivalist dinosaur-related SF flicks in 1978, but it feels like a mockbuster nonetheless.  Anyway, if you’re craving a hit of sweet stop-motion, this one is more than worth checking out.  If not, don’t bother, I guess.  But you’re missing out on what the eight-year-old in me considers to be a minor classic of low-budget 70’s SF.
Posted by Bryan Clark at 12:22 AM