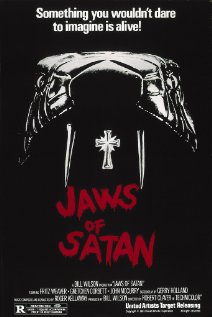 By 1981, every film industry on the planet had been busily ripping off Jaws and The Exorcist for the better part of a decade.  Chief among these cinematic con artists were the Italians.  They dreamed up just about every way to cash in on a popular movie you could imagine and then some, and then a few more just for good measure.  It's kind of amazing, then, that a major American studio was the first and as far as I know only one to rip off both of them at the same time.

Two railroad workers are shooting dice on a train bound for a small town in Alabama.  One of the workers is in charge of a pack of racing dogs headed for the grand opening of a new track.  The other is the caretaker of a massive king cobra being transported to a circus.  When something drives the dogs into a frenzy of barking, their guardian goes to investigate, and an unseen force locks the manways on either side of the freight car, blows the lock off the cobra's box, and hurls the man out the cargo door.  The snake, now under the control of this force, heads back to dispatch the other man.

A few days later, people start turning up dead of snakebite in the town where Father Tom Farrow is whittling away his golden years slowly losing his faith.  Local pathologist Dr. Maggie Sheridan calls in herpetologist Dr. Paul Hendricks from a nearby university to assist her in convincing Mayor Grady Thorpe and local Evil Capitalist Matt Perry to postpone the opening of the new dog track until they can round up all the rogue killer snakes.  In the end, Father Farrow discovers he is descended from a long line of Druid witch hunters (that is, Druids who hunt and burn witches, not some kind of Inquisition Special Forces who specifically deal with Druid witches - bet you thought postponing the opening of a dog track to prevent snake bites was the dumbest thing that happened in the movie, didn't you?) and takes up his Catholic raiment (my WTF meter just buried the needle) to face down the Satan cobra in a cave on the outskirts of town.

Wasn't much of a plot description, was it?  Sure, there's a bunch of other stuff that happens in the movie, but it's all little vignettes and subplots that either don't go anywhere or have nothing to do with the movie.  My first thought on finishing the movie was that it felt like they never had a complete script, and just filmed the treatment.  There are plenty of good ideas here, and had they been fleshed out this could have been a genuinely good flick.  As it is, the movie is content to occasionally rouse itself from its stupor of mediocrity to remind you that if they'd revised a couple more drafts of the script or spent another week or two on shooting, you'd be watching something much different and better, before it collapses back down under the weight of its own lack of interest.

Where to start?  The beginning, I guess.  The first guy the snake actually directly kills is the second rail worker on the train.  It rears up menacingly before him, and we are treated to several lingering shots where you can clearly see the reflections of both the actor and the camera behind him in the sheet of glass separating him from the snake.  Then, when the snake strikes, it visibly and audibly crashes its head into the glass with a loud "THUMP!", in a place not anywhere near the spot the makeup crew applied the bite wound to the corpse we see later.  With no time or money to reshoot, they would have been wiser to leave the scene out.  We know the snake was going to kill the other guy, and seeing his corpse a few minutes down the road would have been enough.  At least they wisely avoided trying to use the technique again, and kept the snake and the actors well apart.  Well, except for one hilarious scene where the glass was supposed to be there.  While driving to the final confrontation, Dr. Sheridan is randomly forced off the road by a lone biker, who hauls her out of the car at gunpoint to rape her.  She's saved in the nick of time by the arrival of Satan cobra, and the slithering prince of darkness loses some major evil points for not waiting and watching the rape before killing both of them.  Don't misunderstand me, rape is loathsome and I have no desire to watch it, but this is motherfucking Satan we're talking about here!  Anyway, she takes cover in her car and the snake breaks out her window with its head before she can fire up the engine and drive off.  Right before the strike, you can see one of the snake handler's fingers and part of his shirt sleeve as he swings the presumaby drugged and very unhappy snake against the car window.  Which is a better fate than befalls the poor diamondback rattlesnake that gets its head blown off with a revolver for our viewing pleasure.

Evil Capitalist Matt Perry isn't given much to do other than raise the neccessary complaints about closing the dog track, which in this movie more than any other Jaws ripoff I've seen is obviously nothing more than slavish following of genre procedure without considering whether or not it actually makes a damn lick of sense.  After all, Father Farrow is the only person who knows the snake is actively evil.  Sheridan and Hendricks's panic seems like an awfully big overreaction.  Even though the bites are clearly from a snake not native to the area, thousands of people swarming through the town would drive any normal snake to run and hide, not slither into town and start attacking everyone it could find.  Even agressive snakes like black mambas would steer clear of the mass noise and confusion of something like a busy dog track.  However, he is given one scene of character development that seems like it came from a completely different movie, and accomplishes the exact opposite of what it tries to do.  The two scientists have managed to get the mayor to agree to a curfew, and Perry's young daughter (played by Christina Applegate in her very first role) breaks it to go outside and find her pet cat who ran out into the garden (these people are rich as hell, you'd think they could afford to get their unbelievably skanky-looking cat's shots updated; I'm pretty sure the thing has mange, scurvy, gout, and possibly AIDS).  When she walks into the living room where her mother had just been giving her father a severely bitchy tongue lashing for being a heartless bastard, "You've changed, and it isn't a pleasant one", mom snaps at her in a way that is clearly not borne of concern for her safety and grounds her for a week, right after we see Perry kissing his daughter on the head and asking if she and the cat are okay!  It's a good way to humanize your Evil Capitalist, but it's done in a way that more makes him look not evil at all, but browbeaten by a nagging wife into buying her fancy things.

And finally we have Father Farrow's confused and confusing ancestry.  It is made very clear that he comes from a family with a long history in the church.  His uncle, father, grandfather, and presumably farther back than that, have all been priests.  And yet, when he goes to ask his uncle's advice about the killings and his waning faith, he is presented with a big book written in Gaelic which tells that they are descended from Druid witch burners (which is a big enough head shaker all in itself, and the fact that it's only part of the muddled theology of this ridiculous movie is staggering), and that one of their line (one of the Druids, mind, not one of the priests) once faced and defeated a Satanic snake while dressed in his raiments but without his cross (!?) and used some kind of golden sigil to drive the thing back to Hell.  Of course, in the end they forget all about that golden sigil, and Farrow uses light reflected from his cross necklace like a holy laser beam to destroy the snake, which is one of many instances that makes you wish that, if the movie wasn't going to put any effort into being good, it could at least dive off the rails at full speed like the most entertaining of its Italian brethren.

A more thoughtful movie (Rawhead Rex is a good example), would have played on the practice of the Church of supressing through assimilation all the pagan religions of any area it swept through (because those pagans all seemed to have a lot of fun, and God hates fun), and showed how Farrow had to regain his faith by reaching past his Christianity and embracing the heathen history of his family.  But then they had to go and explicitly state over and over again that his ancestors were Catholic Druids who burned witches.  Makes the visible stagehand bonking the cobra's head against a window seem subtle by comparison, doesn't it?
Posted by Bryan Clark at 5:58 PM