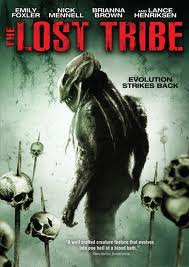 At the end of this movie is a dedication to a bunch of someone's favorite teachers.  Considering the director seems to specialize in stupid action movies, and this movie has a decidedly academic tone to certain aspects of it, and the writer only has this one credit to his name, I'm going to guess it was him.  That would explain a lot about why this movie seems to take such care with the society and behavior of the monsters monsters and the work of the scientists, and is worse than the most listless of slasher movies when it comes to our five Expendable Meat characters.  Which is really unfortunate because that's who we're going to be spending most of our time with.

After a bunch of mysterious goings on at a paleontological dig on a nameless tropical island and some cloak and dagger stuff in a church, the meaning of which won't be made clear until almost the end of the movie, we are introduced to the five obnoxious morons we'll be forced to spend the remainder of the movie with.  Joe, Alexis, Tom, Anna, and Chris are five friends/business partners heading to somewhere in Asia to close a deal on a broadband internet company.  They're in the middle of the ocean on Joe's private yacht when they run across a guy floating, almost dead, and with no identification.  After a good deal of arguing about whether or not to call the coast guard and delay their business trip, potentially missing out on a multi-million dollar deal, they eventually decide to stash the guy on the boat and hope he lives until they make it to Singapore or wherever the hell it is they're going (they mention several different places as sites for their business).  In the middle of the night he frees himself and tries to commandeer their boat, succeeding only in smashing it to pieces on the rocks surrounding a nameless tropical island.  Would you bet it's the same place that massive hominid skull was dug up in the opening scenes?  I would.  Would you also bet that since the unearthed skull was clearly recently dead and not at all fossilized, that just maybe some living members of its species still call the island home?

Sure enough, pretty soon our bunch of bickering dolts are running for their lives from a group of barely-glimpsed assailants who move silently through the trees and undergrowth.  Soon they're whittled down to just Anna, who has by now discovered the empty camp of the paleontologists from the beginning.  Well, it's not entirely empty.  Somehow, Catholic Assassin Gallo (Henriksen, in one of his familiar contemporary "we paid him to say a few lines so we could put his name of the box" roles) has managed to survive the creatures' attacks until now.  He has just enough time to give what is probably the stupidest piece of exposition in recent memory before his chest is punched out.  We'll come back to that.

While fleeing through the jungle, Anna discovers in a very strange ripoff of the mud sequence from Predator that the juice from a slimy, grape-like fruit makes her invisible to the things.  She uses this camoflage to sneak into their lair, ending in what I'm sure was supposed to be a thrilling chase through the woods and a final confrontation with the leader of the creatures.

I can't remember the last time I saw a movie that seemed so bored with itself.  Despite being virtually constant action once the protagonists hit the island, it feels like the director just pointed the camera at the actors, told them to do what the script said, and then pulled his hat down over his face and took a nap.  The whole production has absolutely no sense of urgency or suspense.

The only person who seems to care much about anything is the writer.  The script is pretty amateur stuff, as you'd expect from the first screenplay of a direct-to-video horror writer, but there are strong if clumsy and ill considered signs that he really cares about the subject matter.  The creatures seeing in black and white, while technically wrong because no catarrhine apes or Old World monkeys have monochromatic vision, has some semblance of scientific veractiy to it.  Trichromatic color vision evolved in primates two separate times, once in the apes and Old World monkeys, and again in some New World monkeys like howlers.  Somewhere in the trainsition from reptiles to mammals, full color vision was lost, and had to be regained over time.  Mammals, in fact, have pretty bland color vision compared to a lot of other animals.  Some animals, such as tortoises, even have tetrachromatic color vision, which is impossible to imagine, but must be dazzling.  Most New World monkeys have dichromatic vision, and it required special sets of circumstances that the creatures on the island may not have encountered in order to get their tri- or even in this case dichromatic vision back from their reptilian ancestors.  Of course, the fact that they're supposed to be the closest evolutionary link to humans makes that utterly stupid.

The other sign shouting from the rooftops that it was the writer who dedicated the movie to his teachers, is Henriksen's character Gallo.  The idea that the Catholic church would dispatch a crack squad of assasins to kill the paleontologists that discovered the creatures on the island is a real facepalmer.  I get wanting to take a jab at religion's willful ignorance in the face of scientific advances, but come on.  If the church ever did anything but stick its fingers in its ears and hum so it couldn't hear the world of science shattering all its archaic, superstitious notions of how the world works, there would be piles of dead scientists everywhere, and museums would contain nothing but dioramas of the Apostles riding dinosaurs to the Last Supper.

And then there are the creatures themselves.  Setting aside for a moment the fact that evolution is a gradual process and there are no clear delineations between species - it's not like a chimpanzee just gave birth to a fully-formed human one day - the closest runner up to a human ancestor would be a good deal smaller than us, not a full head taller with ridiculously exaggerated bodybuilder musculature.  Another sign the director didn't give a damn.  He had to approve these designs, and apparently he thought his audience was so stupid they wouldn't notice how ridiculous is the suggestion that the closest evolutionary relatives to humanity look like the offspring of the Jack Link's sasquatch and the were-bat from It Lives By Night.
Posted by Bryan Clark at 7:47 PM