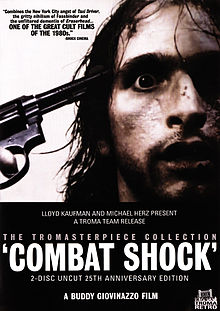 
This was meant to be posted on Memorial Day, to commemorate all our brave soldiers who lost their lives defending our country.  Or forcing our country's ideals on another, completely different, civilization at the behest of our right-wing lunatic leaders (the previous ones who started the war, for clarification - not calling Obama right-wing - Jesus H. Cthulhu, can you imagine how liberal you'd have to be? We're talking someone who would feel bad for getting over a cold because the poor, defenseless virus had to die...).  Whatever. Anyway, I watched the movie on Memorial Day.  Really, I did.  You can't tell.  I'm all patriotic and shit.  Welcome to one of the most depressing and surprisingly one of the purest movies I've ever seen.

I say surprisingly because when I saw the Troma logo sequence at the beginning, I thought I was in for a real load.  I've had plenty of experience with Troma, both as production company and simply as distributor, and very little of either has been any good.  Surprise, then, when once you get past the seemingly endless Vietnam prologue, the movie turns into a minor masterpiece of depressing nihilism and grindhouse sleaze.

The flick follows down-and-out Vietnam vet Frankie, who, after the war, is unable to find a job and trapped in a festering New York City apartment with a nagging wife and a constantly wailing, deformed son - the result of Frankie's prolonged exposure to Agent Orange in 'Nam.  This aspect of the movie is all the more unsettling for the cheap special effects, which realize Frankie's unnamed son as a creature that resembles what would happen if you put E.T. in the microwave on the defrost setting.  Eventually, Frankie, insurmountably indebted to pimp/hustler Paco, and unable to settle even the most meagre of his debts, returns home from  yet another fruitless job search to blow away his wife and deformed baby with his service revolver.  He roasts the corpse of the latter in the oven while drinking a glass of lumpy, rotten milk and blowing his brains out to the tune of the NYPD hammering on his door.  A friend of mine once described George R. R. Martin's "Song Of Ice and Fire" series as a Supersized Bleak, with a side of Bleak Fries and an extra large Pepsi Bleak.  That description pales in comparison to the reality of this flick.  Either Giovinazzo or someone close to the production must have been a Viet Nam vet, because although I have never served in the military or suffered from PTSD, this movie is the first and only cinematic experience that really made me feel close to what that crushing hopelessness must have been like.  This is a grindhouse flick with a purpose, an exploitation movie with a moral that goes beyond the simple "wages of sin" bullshit that most such fare pushes, to espouse a true and disturbing facet of human nature: the ultimate length a man can be pushed to by higher authorities and the aftermath of his resultant abandonment, until he finally snaps.  This movie, more than almost any other I have ever seen or can even think of, unflinchingly reveals the breaking point of man.

If they had left the pointless junkie subplot that eats up most of the middle section of the movie on the cutting room floor (or as crumpled script pages in a wastebasket), this flick would move like a soldier on a mission, and wield the destructive power of the most potent depressive narcotics releasing a mental ED-209 into your cerebral cortex (this previous sentence is what happens when you decide to write reviews at 2 a.m. drunk out of your mind and post them without editing - R).  Cut away that meaningless, extraneous dreck, and you'd have one of the most powerful anti-war movies ever made.  As it is, even with nearly 20 minutes of only peripherally related footage that brings the whole thing to a halt, Combat Shock is one of the most powerful, disturbing meditations on war and its often-overlooked side effects that has ever been filmed.
Posted by Bryan Clark at 10:51 PM