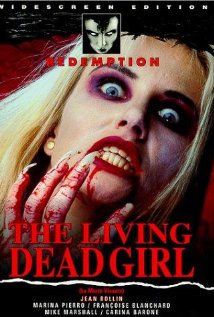 It's been a while since I've dipped into the Eurosleaze grindhouse pool, which is strange considering it's long been one of my favorite genres.  One glaring gap in my experience is that I've never seen a Jean Rollin movie.  I've read plenty about him, and mostly he seems to be remembered not for his own works, but for that crappy zombie movie he got hired to finish after Jess Franco jumped ship.  Thanks to the glory that is Netflix Instant, I popped this particular cherry the other night with a little gem from late in the most well-known portion of Rollin's career.  Based on this flick, it seems to me a damn shame he gets blown off as a talentless hack.  Even with the Redemption Video print Netflix uses cutting off a good 3/4 of the subtitles, I had a great time with this quiet, atmospheric little gothic.  Of course it could be a complete fluke and everything else the man touched was utter shit, or maybe this is utter shit too, and being spared 90 minutes of dialogue that makes Tommy Wiseau sound like Shakespeare and left to enjoy the pure aesthetic of it saved the day.  But somehow I doubt it.  I'll know for sure after a few more rounds with the frog Franco, but until then, read on MacDuff.

Two bumbling clowns (Editor's Note - not actual clowns, the word is used here to mean oafish buffoon) are, for reasons obscured by the...uh...obscured subtitles (allow myself to introduce...) (how many more parentheticals can I ruin the flow of this sentence with?)(this many), disposing of some barrels of toxic waste by hiding them in the Valmont family crypt, which contains exactly one coffin.  The coffin in question belongs to Catherine Valmont (who we will later be told died two years ago, but is looking incredibly fresh - perhaps Herbert West was moonlighting as a funeral director in France between the fiasco in Germany and his arrival at Miskatonic...), and the clowns (buffoons)(I promise I'll stop) have the incredible bad luck to be hiding their toxic waste during an earthquake.  Clown 1 falls into a puddle of spilled waste during the quake, melting his face off.  Clown 2 is unfortunate enough to witness the fumes and the whole-lotta-shakin-goin-on resurrect Catherine, before she jams her clawlike index and middle fingers into his eyes.  She then heads off to her family home, now up for sale and located either several miles away or directly over the crypt depending on the needs of the story.  This is a European horror movie, remember.  Atmosphere first, logic last if at all.

Meanwhile, argumentative couple Greg and Barbara are vacationing nearby, and Barbara happens to take some photos of Catherine walking dreamily through a field on her way home.  These two will spend the rest of the movie asking around town about the mysterious girl, and will eventually find themselves on the receiving end of Catherine's bloodlust, but none of that ends up mattering very much as anything more than a way to pad the flick out to feature length.

The real meat of the flick is the relationship between Catherine and her childhood friend/sister/cousin (subtitles, remember?), Helene.  After slaughtering the bejeezus out of the realtor in charge of selling the abandoned mansion and her boyfriend when she catches them canoodling on the couch (presumably she was furious at them spilling their respective fluids on the place where she used to read See Spot Run), she answers a phone call, which happens to be from Helene.  Who knows why she was calling an abandoned house, but when Catherine answers, her voice fails her and she instead opens a music box that played an important part in a "blood sisters forever" pact they made when they were young.  Helene takes this as all the evidence she needs that her friend has risen from the grave, and rushes back to the Valmont mansion to care for her.

As the movie progresses, we see the relationship slowly start to swing from one extreme to the other.  At first, Helene is horrified by Catherine's need to feed, rather messily I might add, on human blood.  She grudgingly helps her find victims, and then disposes of the bodies afterward, hiding in an old silo full of pigeons during the feedings so the noise of the birds will drown out the screaming.  Slowly she begins to harden to the idea of taking human life, going from being sickened but acting out of love for and obligation to her friend, to coldly taking lives herself to protect Catherine.  Catherine, meanwhile, regains more and more of her humanity with each feeding, going from a voicless, animalistic monster who is very fond of dispatching her victims with a brutal, claw-tipped version of the old Three Stooges two-finger jab, to becoming horrified at what she has become and what Helene is becoming for her sake.

When the torch-and-pitchfork crew from the village finally cotton to what is happening up at the old mansion, it'll be awfully difficult for them to distinguish which of the two women is the real monster, regardless of which one has claws, no pulse, and a serious sanguine addiction.

Man, I love having my expectations blown out of the water.  I'm really glad I had all those years of reading about what a bad filmmaker Rollin was, and how dull and meandering his movies were, because it's always fun to have a prejudice smashed by something you weren't expecting to like very much, and I don't know if I would've enjoyed this flick as much as I did if I had gone in completely cold.  I'm sure I'd still have enjoyed it, but it probably wouldn't have struck me as quite the breath of fresh air that it did.  Of course, if any of you reading this take it as a cue to run out and see your first Rollin movie, all this praise may have completely the opposite effect, but I certainly hope it doesn't.  After having sat through some pretty boring crap lately trying to feed my need for grainy grindhouse fare (I'm looking at you, Invaders of the Lost Gold), it was great to find something that reminded me why I love this stuff in the first place.
Posted by Bryan Clark at 9:38 AM