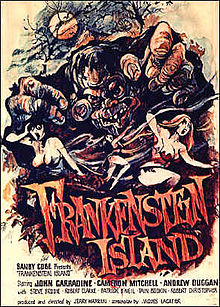 Oh hi, readers!  Welcome back to Cinemasochist Apocalypse, you know.  Don't worry about it.  When I write a review, I usually watch the movie, and then let it stew for a couple of days until inspiration for an angle pops into my head.  Usually it's something simple and obvious.  In the case of tonight's movie, I am well and truly at a loss.  I guess the angle is, "what the fuck was that?"  You'll see what I mean.  Read on, MacDuff.

This is the last film and testament of one Jerry Warren.  Warren was second only to K. Gordon Murray in importing crappy Mexican movies and giving them even crappier dubbed English releases.  He was also responsible for a glut of unbelievably boring movies with really cool titles like Terror of the Bloodhunters.  It may be that the blandness of the title is directly related to the entertainment value of the movie, because Frankenstein Island may be a pretty prosaic title, but the movie is absolutely batshit insane.

Four hot air balloonists are blown off course by a tornado at sea (despite one of them being an acclaimed scientist, and all four experienced adventurers, none of them seem to know what a waterspout is), and land on a strange island.  They come across a girl in a leopard skin (and by leopard I mean tacky print that bares only the slightest resemblance to the pattern on a real leopard's fur, and by skin I mean cheap curtain fabric) bikini strung up between two poles.  The rest of her tribe shortly arrive to take our heroes into custody, where they learn that the island is populated by the aforementioned tribe of Amazons (who we will later discover may or may not be descended from a race of aliens that once tried to colonize the island!), as well as a group of strange subhumans who used to be the crew of a ship that wrecked on the island, and who look suspiciously like a bunch of over-the-road truckers and Molly Hatchet roadies dressed in identical black sweaters and beanies and sunglasses.

When one of the trucker/roadie/zombie whatevers kidnaps one of the girls and runs off with her, our heroes give chase, because naturally they befriended the hot (well, that's a strong word -  a couple of them are eye candy, the rest more like eye macaroni salad), nearly naked jungle girls who swing wildly between ooga booga caveman talk and perfectly respectable full English sentences (on top of fried bread and covered in beans!) in the hopes of some jungle nookie.

After the pudgy bastard drops her (and I'm pretty certain has a legitimate and very visible heart attack right on camera), we meet Jocko and Dino, the two members of the wrecked ship crew who didn't get zombified.  They take our heroes back to their base, which is a mansion and surrounding buildings, where we meet Clay Jayson, the ship's captain.  Clay is kept in a cage as a blood donor, but the constant drain on his red Kool-Aid means he's gone a little nuts and is convinced he's the guy Edgar Allen Poe used as inspiration for "The Raven".  Yeah, he's ravin' all right.

And all this is leading up to the big reveal that we already knew because of the title.  Well, I take that back.  You knew this was a Frankenstein flick.  You didn't know that it's actually Frankenstein's great granddaughter who lives on the island, continuing the family legacy with the bedridden body of her husband...are you ready for this shit?...Abraham goddamn von motherfucking Helsing!  Who...are you ready for this shit?...is two hundred years old and kept alive by the sheer willpower of the ghost of Victor Frankenstein, which is channeled through the monster's brain, which is kept alive in a life support unit in a corner of the lab!  Frankenstein himself is seen occasionally as a floating apparition played by the inimitable (and in this case nearly dead and clearly reading his lines off a cue card) John Carradine, who appears to the jungle girls when they do stripper dances and smoke pot out of skulls (no, seriously, this happens) and promises them they shall have, "The power! The power! The Power! THE POWER!"  What power, why they shall have it, or why he only appears to them when it seems his granddaughter and von Helsing's decrepit body are their enemies, the movie never bothers to explain fully.

There's a lot of running around and having one of the jungle girls babysit Melvin, the cute mutt who accompanied one of the balloonists and keeps threatening to become salient to the plot but never does, and the amazingly lifelike wax replica of Peter MacNichol who played the revival preacher in Giant Spider Invasion challenges one of the zombie henchmen to a wrestling match even though they were not five minutes before warned that the creatures were completely mindless (also animated by the will of Frankenstein's ghost), prone to fits of unpredictable violence, and so tough they have to be mowed down by heavy-caliber machine gun fire when they get out of hand.  Apparently Sheila Frankenstein von Helsing (Jesus H. Christ) saying, "Sports. Over there. If you wish" and pointing to the wrestling zombies just got him itchin' for some wrasslin'.  I guess they're not coordinated enough to play frisbee golf.

They start to get cold feet about the whole thing when Dr. Paul Hadley decides to help Sheila continue her great-grandfather's work, and the whole operation goes tits up when K-Mart MacNichol teaches the jungle girls to use one of those machine guns and Frankenstein's monster pops out of the lake for no good reason to go on a Hulk-smash rampage.

I have a lot of movies under my belt, and I've seen some weird shit.  This one doesn't quite take the cake - it's hard to top any kung fu movie that involves taoism for weirdness - but as far as American genre flicks go, this is right up there with the craziest thing Al Adamson ever put out.  And best of all, that weirdness is totally sincere.  Movies like this that were made before irony ruined everything fun are the best, because there isn't a single hint that every silly, stupid thing in the flick wasn't considered by Jerry Warren to be utterly awesome.  The acting ranges from awful to competent enough to be noticeably embarrassed about what they're doing, but Steven Brodie at looks like he's having a ball (which is likely because that bottle he carries everywhere really is full of whiskey), and Cameron Mitchell flexes some unexpected acting muscle in a role that only requires voracious scenery chewing.  I love that there are still movies I have yet to discover that will completely catch me off guard with such gleeful insanity, and I hope a good many of them have John Carradine in them when they do.
Posted by Bryan Clark at 5:00 PM