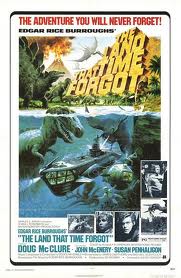 It seems like lately I've been stuck in a rut of movies that don't really do much for me. It's an ugly cycle, realizing it's been a while since I've posted anything, putting on the first movie that grabs my attention, only to have it just kind of sit there and stare at me, willing me to be entertained in spite of itself. It's just not much fun trying to think of things to say about movies that don't inspire any feelings in you one way or the other. It would have been ok except... it should have been entertaining if it weren't for... and when you're attempting to support your hobby with an Amazon affiliation, all the mediocrity doesn't help. Even a case of, “Holy shit, it's so awful you just have to see it!” would be fine, but, “Meh, it was pretty dull; here, would you like to pay to see it?” seems like a poor business model indeed. So rather than play roulette with another unknown quantity, I decided it was time for something tried and true and always reliable for a good time. Let's watch Doug McClure punch some cavemen and dinosaurs in the face, shall we?

When I was very young, a friend of my parents gave me a Christmas present. In it was a set of astronaut soaps shaped like various space vehicles, and a VHS tape. I'd never heard of the movie before, but the cover immediately grabbed my imagination and ran with it. A submarine menaced by a T-rex (like every six year old boy, I knew damn well they didn't live underwater but it looked so cool I didn't care) and some kind of giant manta ray spraying a blast of pressurized water out of a spout on its head. It was like someone reached into my brain and made a movie with the stuff they found there!

The year is 1916, and an unfortunate British ship has found itself in the sights of the German submarine U-33. One lifeboat full of survivors has made it away from the sinking wreck, and it contains several members of the English crew, a female biologist (!) named Lisa Clayton, and Bowen Tyler, an American who claims to know U boats inside and out and whose occupation seems to be socking things in the jaw. When U-33 surfaces for air, Tyler leads the Englishmen onto the deck and takes over the boat! I would love to hear the internal monologue of the first German seaman through that hatch, just popping up for a fresh breath and a look around and winds up getting grabbed from behind and held at gunpoint. Just about the last thing you'd expect on a submarine, really.

Captain Schoenwartz shortly regains control after using his spare key (way to search your prisoners there, guys) to release himself and his other officers from captivity, and Tyler realizes they've been double-snookered when a German supply ship shows up. First Officer Dietz (played by Anthony Ainley – hey, he played The Master, of course he's a crafty bastard!) has tampered with the compass and had the sub pointed toward German-controlled waters the whole time Tyler was in control. Unfortunately for the Germans, they didn't do a very good job recapturing their unexpected guests, who manage to fire a couple of torpedoes into the German ship while no one is looking. Informing Tyler that ship was the only source of supplies in anything like useful range, Schoenwartz turns control of the sub back over to him in a sort of, “Ok Mr. Smart Guy American, you got us into this crap, you get us out of it!” gesture. Schoenwartz suggests they head for the legendary land of Caprona because, well, they're in the middle of the Antarctic and about to starve or freeze to death anyway, and a probably-imaginary haven is better than none at all.

But sure enough, they follow a current of warm water through a submerged channel in a rather forbidding rock face, and once on the other side they find themselves in a tropical paradise. Of course, the tropical paradise happens to be full of dinosaurs and hostile cavemen. Fortunately for them, the landscape is also dotted with huge swamps made of crude oil, and if they can refine enough of it before the cavemen club them all to death, the dinosaurs eat them, or the mandatory volcano vaporizes the entire island, they should be able to get home.

I've been really surprised over the years at how lukewarm the reactions to this movie have been. Okay, sure it has some dinosaur-sized plot holes, and introduces that interesting idea of Caprona being a microcosm of all stages of evolution and then never really does anything with it beyond using it as an excuse to show as many different prehistoric creatures as they could afford without having to worry about whether the time periods matched up, but dammit this movie is nothing if not exciting! There is almost never a scene without some kind of action happening, especially once they get to Caprona. When the dinosaurs and cavemen aren't attacking, the crew get in fistfights or talk about dinosaurs and cavemen attacking. The performances are uniformly solid, with all the British cast being typically dependable British actors giving it their all no matter what silly thing they're asked to do. Even Doug McClure, who is one of those b-movie action hero types who people like to make fun of, does a fine job. I never really understood why people rag on him. He may have a limited range, but within that range I've always thought he was very charismatic and fun to watch.

Which brings us to the dinosaurs. Why are people so down on the dinosaur effects in this movie? Even if they did suck, which they don't, the very fact that the filmmakers decided to use things like Ceratosaurus, Styracosaurus, and some species of kronosaur (as well as Pterodactyls that, despite being way too big, actually are Pterodactyls instead of Pteranodons) instead of the usual stable of more familiar and popular dinosaurs should get them off the hook. But despite their rather obvious puppet origins (and really, what the hell else are they going to be besides guys in suits that would look far less realistic), the detailed model landscapes (and the excellent model shots of the U boat), combined with the actors treating the material with the same gravitas they would give to Shakespeare, really sell the creatures. Even the weaker effects attain that cooler-than-real vibe that skillfully handled stylized model work can have, and let's be honest - compared to the creatures in Amicus' other prehistoric offerings, this flick looks like goddamn Jurassic Park.

It's got action, adventure of both jungle and high-seas varieties, great special effects, dinosaurs eating people, bullshit science, and if you squint really hard at one point even some boobies. There is absolutely nothing about this movie not to love. I adore it, and you should too. Watch Doug McClure punch a caveman today, won't you?