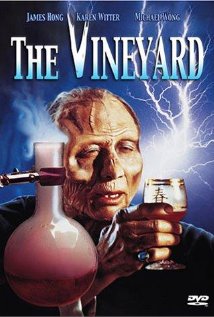 Even though I'm from Iowa, I live close enough to Minnesota, and the Minneapolis/St. Paul area in particular, that when someone from there winds up being famous I still consider them “one of ours”. It's cool to find out someone famous is from the Midwest. Malorie's great aunt went to high school with Cloris Leachman, and Sam Arkoff was born and raised in a town called Fort Dodge, Iowa, just a little over an hour's drive from where I live. So I was rather surprised to discover that David Lo Pan himself (among other things in quite a prolific career, he also dubbed the voices of Ogata and Serizawa for Godzilla, King of the Monsters), James Hong, is from Minneapolis while I was doing a little background research for this flick. I like to picture him returning home triumphant and having the premiere of this, his first auteur work, at the Landmark Uptown, only to have his friends and family sneak out the back one by one covering their faces in embarrassment.

We first meet Dr. Elson Po taking potshots from his balcony at a wild dog who was trying to eat the zombie buried in the vineyard behind his house. His wife, decked out in lingerie, comes up to him acting like this is no more abnormal an activity than clipping one's nails, and they start getting it on (and I'm starting to think Hong made this movie solely as an excuse to get paid for groping nekkid women) while she makes kissy faces over Po's shoulder at the handyman working on a truck in the yard. A few hours later, Po wakes up from his post-coital happy place and bolts down the hall clutching his face and making a noise like a panicked chicken. At first I thought this was simply an odd acting choice on Hong's part, but it turns out it was actually an odd directing choice, as every other character required to express fear (or virtually any other emotion for that matter) makes this exact same noise. It is but another thread in the greater tapestry of WTF that is The Vineyard. He is aging with a rapidity usually reserved for people who drink out of the wrong grail, and makes it to his mad lab just in time to drain off a little blood from the neck of a girl chained up in the middle of the room, run it through a still, and guzzle it down to reverse the effects. Before guzzling, he offers a prayer of sorts to a shrine that looks more Central American (I'm pretty sure he refers to it as the Mayan god of the wind at one point, at least that's what it sounded like) than Chinese, which basically amounts to screaming, “I want everlasting life so gimme!” I didn't realize gods responded so positively to haranguing. There's some stuff about his eternal mission for this mysterious dark god, getting people to drink his magic wine or some such nonsense, but all I could think during this scene was what a ballsy move it was to keep his wench-draining mad scientist murder lab in an above ground room with open Venetian blinds on the windows!

Ok, it's time to meet the meat. I don't know much about the sordid details of the movie business, but I have a hard time believing that a viable method of getting cast is to get all tarted up and troll for producers at a wine auction. This, however, is exactly what our heroine Jezebel Fairchild is doing when we meet her. Her martial artist boyfriend Lucas who works as a valet at the auction house disapproves, but she insists that once she gets an in it will be good for all their starving artist friends because yay nepotism, and she'll make sure Lucas gets a stunt gig on her first big movie. This ridiculous plan inexplicably works because wouldn't you know it, Dr. Po is also an amateur filmmaker and is looking for some willing young talent to come to his estate for a shoot!

In addition to Jezebel, Lucas, and their reporter friend Jeremy, five or six other young Hollywood wannabes have been duped into coming to Po's mansion, and of course he has to throw them a welcome party before they get down to business. You really have to see it to believe it, but I'll try to give you some idea. Jezebel gets to wear a relatively normal red dress, but another of the girls is done up like Little Bo Peep, one of Lucas's buddies is in drag, and Lucas himself is dressed in skin-tight gym clothes with slicked-back hair and a pencilled-on mustache, making him look sort of like Errol Flynn as an 80s fitness video instructor. And then Po jumps in, wearing a green robe and a strange hat, with one of those clear plastic Halloween masks obscuring his face, doing this ridiculous dance that looks like a cross between one of those come-hither-hand-motion Indian dances and what people who don't know how to do kung fu do when they want to pretend to be doing kung fu. Oh, and to add to the flick's bestiary of strange animal noises, he's making this awful sound like a pissed-off horny cat doing a Bruce Lee impression. Then his mask gets knocked off to reveal a horrible, melted visage underneath and he starts screaming in agony, terrifying all his guests...until he pulls second latex mask off and they all have a good laugh at what a trickster he is. I don't think I've ever seen a movie with so many writers that felt so much like they were just making it up as they went along.

An aside about that mask he's wearing here. We've already seen what he looks like when his centuries of prolonged life catch up with him, so the audience is in on the joke from the get go, and honestly I think they'd have been better off using the trick mask as the actual age effect. Any makeup artist will tell you one of the hardest things about old-age or zombie makeup is making the face look skeletal without building the supra-orbital bones up too much and making the subject look like a caveman. This is why you usually see really slender people as monsters and zombies; they're easier to realistically make up. Hong is not at all a large man, but the makeup crew on this movie went a little nuts with the age makeup and the top half of his skull is two or three times larger than the lower half when it's time for another slug of wench juice.

Anyway, after a little more partying, Hong encourages them to all dance through his vineyard, where one of the girls trips over the hand that mutt was chewing on at the beginning and lands almost on top of the hand's owner, a zombified head who implores the girl to help him. This leads her to run back to her boyfriend and deliver what might be the most ridiculous line of dialog yet (and there's some stiff competition, believe me): “Help, there's something out there! I think it's a wild dog or something!” Keep in mind she was face-to-face with the zombie when it spoke to her.

Turns out Po is the son of an immortal goddess, and he has her locked up in his attic. He keeps a piece of her holy amulet which he siphons power from to make his magical Mayan super-wine, and the dark god he is now in league with has decided that Jezebel will be his bride, who he will sacrifice to the god for permanent immortality. Mom has been using what is left of her goddess powers to reanimate the corpses of his previous victims – those zombies in the vineyard – to make life difficult for him. Problem is, his henchman have run out of sacred earth (couldn't he just bless some more dirt?) to keep the zombies in the ground with, and Jezebel's friends have cottoned to the fact that something fishy is up. Surviving a failed voodoo assassination attempt to wake up in a basement full of dehydrated, half-naked women tends to make one suspicious.

The second half of the flick, once the horror elements come to the foreground of the plot, settles down to a much more normal brand of crap, but that party sequence in particular really is a special kind of stupid.
Posted by Bryan Clark at 10:12 AM