We cut our trip a day short this year because my parents and Malorie and I took the kids to Disney World. It was a lot of fun watching them go crazy seeing all their favorite characters and going on the rides. Isabella got to meet some of the princesses (wearing her own replica Belle dress and tiara of course), and Phoenix was in heaven on the 3D flight simulator Star Wars ride (which was pretty goddamn awesome). After we got back from that, we had a couple of days at home to take care of various things like doctor's appointments and getting some paintwork done on the bumper of my car where I backed into a concrete barrier trying to get out of a parking garage we weren't supposed to be in when we went to see the Devin Townsend Project and Katatonia a few months ago. Also the airline forgot to take my suitcase off the plane coming back from Florida and so I had to be home Tuesday morning so Fed-Ex could bring me my stuff.

Car freshly painted (and smelling funny), we set off bright and late Wednesday morning and got to Morton Grove with enough time to do some shopping at Half Price Books and have dinner at this incredible Himalayan restaurant called, imaginatively enough, Himalayan. Thanks to Scott and Jessica for recommending the place. I got to eat some stuff I can't get at home, and since we all shared our stuff around, got to try more than one new thing, which I try to do each time we go to Chicago. And once again, I got a massive box of books from Tim. It was full of awesome as always, and I think maybe even outweighed the boxes from previous years. Considering I've still not managed to get through everything from the first box he brought me three years ago, I'll probably be in a nursing home before I finish everything from this one. But hey, at least it wasn't full of copies of Flesh.

We polished off the day with some Cedar Ridge whiskey (it says bourbon on the bottle, but I can't bring myself to call it that because it's made in Iowa – but whatever you want to call it, it's damn tasty) and the face-meltingly awful thawed-out-caveman flick The Stoneman, featuring Mr. Belding from Saved By the Bell and a visibly dying and clearly unhappy to be there Pat Morita.

The original plan for Thursday had been to hit the Lincoln Park Zoo, but since most of it is outside and no one wanted to walk around in the cold, we opted for the Oriental Institute instead. It was pretty amazing to look at some of these artifacts from so far back in human civilization. We even got to see a game board that looked like the alien hunter's Frisbee of death from Predator 2 and some ancient Mesopotamian homework tablets! And of course the massive lammasu from King Sargon the Second's front porch was a treat. We finished that museum with more time left in the day than any of us wanted to spend either sitting around in the hotel or randomly driving around looking for entertainment, so we decided on the Shedd Aquarium for round two. Our plans were foiled because all the fish were out being dry cleaned, so we hit the Field Museum again. I was fine with that, because when we were there two years ago we killed all our time in the Americas exhibit and hardly got to look at the dinosaurs at all. So this time, we looked at nothing but dinosaurs, and even had time left to hit the basement for another delightful Mold-O-Rama session. Last year Tim got me the green brontosaurus, and this year I opted for the almost neon-orange stegosaurus, mostly because I liked the color of the plastic best. Maybe we'll go back again one of these days and I'll complete the set. 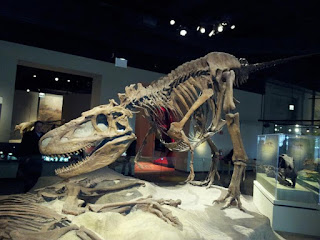 Tourism accomplished, time for a quick supper at Portillo's and off to the Hala Kahiki. I can never decide if I'm just a total lush or they just don't like me and water my drinks down, because everyone always talks about how messed up they get from just one or two cocktails there and last year Mal and I downed four apiece and felt nothing. So no more messing around this time. I just went straight for the Volcano from the, “drinks for two” section of the menu. Most of their drinks have at least one kind of fruit juice to cut the booze, but this is just a giant bowl of light and dark rums and sherry for the sweetening mixer, with a flaming shot of 151 to top it all off. Thanks so much to KO Rob for paying our tab. He told me last year if I drank one all by myself he'd buy it, but I wimped out. I'd completely forgotten about that deal, but I guess it pays to be a lush. Mal also had a big bowl of hooch that tasted like pineapple. We didn't get the back room we've had for the last few years, where we can all congregate in a clump and hear each other speaking, so we put some tables in a line along one wall in the front like we used to do, which sucks because you basically have to pick the three people you want to talk to for the night and sit (it doesn't help we were against the wall so there wasn't much room to get up and move around. 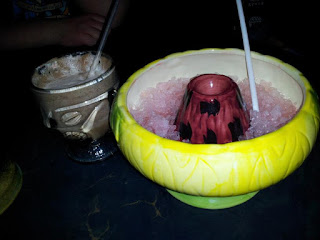 Speaking of apples, when we got back to the hotel for the room party proper, Tim attacked us with The Apple. A few people came after we'd settled in and on two separate occasions, within seconds of opening the door the words, “Oh goddammit you're watching The Apple” were uttered and I'm sure thoughts of fleeing for home were entertained. Buoyed by liquor, however, no one lost their nerves from the onslaught of futuristic disco cock rock, and halfway through Crocodile (the Sompote Sands one, not the Tobe Hooper one) we tapped out for sleep to prepare for the next day. B-Fest was soon upon us! 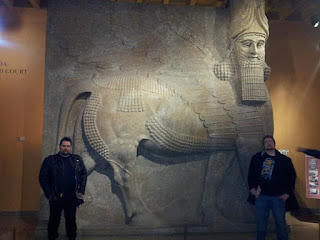