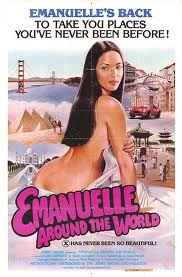 Inter-series continuity is about the last thing you'd expect from a filmmaker as sloppy as Joe D'Amato. It's even more shocking than a woman getting fucked by a German shepherd (we'll get to it, just be patient). Nevertheless, that's what we're presented with just as soon as Emanuelle gets done banging a trucker in his van full of beds. Turns out he picked her up on a pier where she'd hitched a ride on a yacht and debarked with no money or clothes but those on her back, because she just came from a tropical island where she tried to find happiness but, as she says, “it didn't work out”. At the end of the previous installment, Emanuelle In America, we saw our heroine head off to a tropical island with her boyfriend. Apparently the simple life wasn't for her, so she headed back to the States to take up her old job at the newspaper.

Her first mission is to head off to India, where a guru is charging exorbitant amounts of money to teach people how to achieve the ultimate orgasm. This, of course, is nothing more than a pointlessly long set up to just about the most obvious punchline ever, as Emanuelle bangs the guru and, as he's smoking a cigarette and basking in the afterglow, sure he's just blown her mind, she basically shrugs and says, “Meh, it happens to a lot of guys”. There are two notable things about this sequence. One is another unexpected display of concern for continuity as the hardcore inserts with a very obvious body double for Gemser (hey, she turned into a white girl!) were shot on the same set as the orgy scene, probably even at the same time as you can see several of the same extras in the background of the original film and the additional scenes to make them fit together more seamlessly.

The other standout feature of what is otherwise clearly a chunk of padding, is George Eastman as the sex guru. If that name sounds familiar to you, he's starred in several other of D'Amato's movies, most notably Anthropophagous/The Grim Reaper, as the hulking, deformed killer. Eastman is a massive tank of a dude, with extremely intense and scary eyes, and to make him look like an Indian guru (they failed), they put him in brown face makeup and a long wig. This makeup combined with his naturally sinister appearance makes him look like a giant serial-killer sex Jesus.

Next, Emanuelle meets up with her reporter friend Cora Norman, who is working in Hong Kong on a white slavery ring story. They decide to work together, getting themselves sold into a harem so they can track the slavers to the very top rung of the sleaze ladder. Like the James Bond of the sexploitation world, Emanuelle goes from the possession of a creepy, melty-faced guy (whose unexplained and unusual appearance makes it feel even more like a trashy Bond flick), who she narrowly escapes being raped by because she fights too much and he decides she needs to be broken, to a trainer in Hong Kong who teaches the women to respond to even the most vile of conditions with moans of pleasure. This is accomplished by tying them to weight benches in what appears to be a discount hotel workout room and subjecting them to all kinds of degradations.

This is the scene that caused the movie the most problems. The two demonstrations the trainer gives Emanuelle and Cora involve pouring milk on one girl's vagina and putting a snake on it, “because all reptiles love milk and will lap up every last drop”. Sure they do, guy. At one point it's suggested he's inserting the snake into her, but he's pretty obviously feeding it into his hand instead. The other girl gets mounted by that German shepherd I mentioned earlier, and although no actual penetration is shown, judging by the positions of the girl and the dog, unless they covered Rin Tin Tin's red rocket with something she's getting humped for real.

Finally they wind up back in the states, where a group of high-powered politicians get their kicks making the girls dance naked for them in some cruddy warehouse district. When one of the girls gets raped nearly to death by a bunch of winos, the cops come calling and the gig is up. Well, we assume it is. There's never really any clear finale. The half-dead girl gets carted off in an ambulance and Emanuelle trots off to her next adventure, completely unfazed by all the horrible things she's seen the last few weeks.

This was one of the most expensive movies ever made in Italy at the time, with location shooting all over the world. When they go to Hong Kong or India or Iran, it's not just a dressed set in a studio, it's the real deal. All the money they spent really shows, because whatever else you think about it, the movie looks fantastic. D'Amato may be a lousy writer and editor, but at his most inspired, he does have an excellent eye behind the camera. It was quite a shock going from Sex and Black Magic to this. Even though that movie was made only three years after this one, the whole thing just feels dreary, like D'Amato is bored to death with what he's doing and is just going through the motions for a check. This movie, by contrast, is very energetic, garish, sleazy, and reveling in every disgusting moment.

Emanuelle Around the World is the third of five Emanuelle flicks D'Amato and Gemser made together. If the rest of them are as much squalid fun as this one, I'm looking forward to checking them out. Severin Films did a stellar job restoring the French hardcore print for this release, but I'd love some extra features. I want commentary tracks and documentaries for these things. The behind-the-scenes stories are probably even more fucked up than the movies.
Posted by Bryan Clark at 2:50 PM