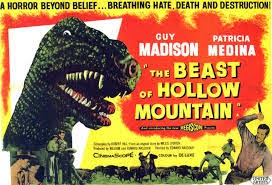 Dinosaurs. I'm willing to bet a solid majority of us b-movie fans can trace our love of monsters back to a childhood obsession with the terrible lizards that ruled our planet for hundreds of millions of years. I certainly can. My earliest movie theater memories are Godzilla vs. the Cosmic Monster and Journey to the Beginning of Time. Talk about truth being stranger than fiction! You dig up a picture of the craziest, most outlandish monster from any movie or Ultraman episode you've ever seen, and I guarantee you I can top it with an actual animal from Earth's prehistory.

The first known Allosaurus fossils were sent to astoundingly prolific anatomy and natural history professor Joseph Leidy by fossil collector Ferdinand Vandiveer Hayden (incidentally, I cannot recommend highly enough the book Legacy of the Mastodon by Keith Stewart Thomson if you're interested in the history of American paleontology) in 1869. Initially Leidy lumped it in with an existing genus, but later decided to promote it to its own genus, Antrodemus.

Several years later, Othniel Charles Marsh gave the name Allosaurus to a different set of fossils, and he and his bitter rival Edward Drinker Cope went on a terribly unscientific spree of making up as many new genus and species as they could from extremely incomplete collections gathered throughout the American West. This sort of publish-first-study-evidence-later behavior was so much the norm in the early days of natural history that it's really quite amazing they ever managed to establish a proper science out of it at all. If I go too much farther into it here I'm going to end up writing a thesis paper instead of a movie review, so suffice to say a great deal of those fossils wound up belonging to the same animal, and after several rounds of back-and-forth between Antrodemus and Allosaurus, the scientific community and popular opinion landed on Allosaurus and here we are.

We meet our heroes Jimmy and Felipe, along with their head ranch hand Manuel, searching for a herd of lost cattle in the swampy area around Hollow Mountain, an area said by the locals to be cursed. The superstitious Manuel is convinced that whatever demonic entity occupies the titular geographic landmark has eaten them. The more pragmatic Felipe, on the other hand, is convinced that their competitor Don Enrique has either stolen their cattle or simply driven them into the swamp to drown. The evidence would seem to suggest Felipe is closer to the mark when they find a steer that appears to have been driven into the swamp on purpose to mislead the ranchers. More on this later, as Felipe nearly drowns in a patch of quicksand, and Jimmy calls a halt to their search to head back to town and regroup.

Here it is that we meet Pancho and Panchito, a father/son combo who simultaneously provide the comic relief and the heart of the human drama of the story. I don't think it's actually supposed to be the heart of the human drama, but these two are much better characters than our supposed heroes, so I prefer to think this story is about them and the boring love triangle bullshit is the B plot. Our introduction to the duo is Panchito trying to talk his drunk father out of leaving the local tavern and come back to the house to sleep off a drunken bender that we can infer has lasted for rather a long time. Pancho gets funny fat guy music to dispel any doubts we may have about his place in the world, as if being a drunk fat guy with a droopy mustache isn't enough of a cue in a movie like this. But then we get the much more human scene of Pancho telling his son that he drinks to forget Mrs. Pancho, who is in heaven. Already we get a taste of the schizophrenic way these characters will be presented, with stupid oompah music presenting the comedic Mexican drunk (because it wouldn't be as funny if it was a white guy), immediately followed by giving him a brutally depressing real-life reason for drinking while simultaneously portraying the no-more-than-10-year-old Panchito as not only having lost his mother but having to take care of his drunk father. And then we get a scene of the fat drunk guy comedically attempting to mount a horse immediately followed by his falling off the horse in a scene that it would be a miracle if the stunt man survived without a broken neck!

Luckily Jimmy is riding through town at this moment so he can rescue Pancho and gain his life-long loyalty. If only Pancho knew how short a lifespan he had left to him. But sure enough, the next morning he and Panchito are at Jimmy and Felipe's ranch, milking cows and feeding ducks, to show their commitment to Pancho's savior. Pancho even promises to give up drinking so he can continue to work on the ranch. Of course, his loyalty overtakes his common sense so that he runs off into the swamp to hunt for Jimmy's cattle, and he becomes the first victim of the dinosaur that will soon be causing problems for everyone involved.

Meanwhile, Jimmy has a confrontation with Don Enrique, once more accusing him of cattle rustling, while Enrique slams Jimmy right back about undercutting his prices and stealing his business. He seems genuinely confused and frustrated at Jimmy's continued accusations of cownapping, but hell, if he's destined to be the bad guy of the piece anyway, he may as well play the part. And when he sees his bride-to-be Sarita riding into town the next day on the back of Jimmy's horse (the Allosaurus ate hers, but they don't know that yet and think it just ran away), he seals the deal with fisticuffs and a dastardly plan.

On the day of the wedding of Sarita to Don Enrique, a couple of hired guns are all set to cause a stampede of Jimmy and Felipe's herd outside of town to ruin their business once and for all. Meanwhile, the large congregation of cattle has tempted the ravenous Allosaurus out of its swamp, and the creature sets off the stampede early so it's headed straight for the town. Can Jimmy stop the cattle and the dinosaur before it's too late? Well, it's the 50's, so probably yeah.

The big complaint about this movie is that it takes forever to get to see the dinosaur. Where most movies of this sort would at least give us glimpses of the creature here and there to get us excited for the main action, Beast of Hollow Mountain keeps the monster completely off screen until the movie is damn near over. Obviously that was done just to save money, but it has an effect on the story that I don't think the filmmakers intended. It makes Don Enrique seem not at all villainous. Our only visual cues that he's supposed to be the bad guy is that he wears dark colors and has a very well-groomed bad guy mustache and slicked back hair. On the other hand, he's getting married to the tough, independent daughter of the richest guy in the area. She doesn't seem very enthused about it, like it's more a marriage of convenience because they're both rich and what else would she do, marry a poor guy out of love? But she never seems to hate or fear him, and she's definitely not the type that would put up with any kind of abuse, so he's definitely not some kind of domineering monster. When it comes to dealing with Jimmy, well, constantly being accused of being a violent criminal by your upstart business rival would piss off everyone. Even when Jimmy says he follows government pricing and Enrique overcharges for his beef and does dirty deals under the table, we have no evidence that this is true other than it's a white guy accusing a Mexican. That may have been enough in 1956 to make it clear cut, and even today we're geared to root for the little guy over the big businessman, but all the evidence here points to Don Enrique being rich and successful simply because he's good at what he does, and after months of incessant needling by some chump whose business is failing because he had the godawful shitty luck to set up his ranch as a buffet for a dinosaur, finally just throws up his hands and says, “Fuck it, you want me to be the bad guy? I'll be the goddamn bad guy then if it'll get me rid of you, you little bastard. And stop making eyes at my girl!”

It's not high drama, but it made all the sitting around waiting for the dinosaur to show up a lot more interesting than it probably would have been otherwise. In fact, once the dinosaur shows up, it almost makes you wish the drama would come back. The fact that our first glimpse of the dinosaur is a stuntman wearing a pair of dinosaur feet that are slightly less convincing than those plush Godzilla slippers you can get from Toy Vault sets the mood nicely for the disappointment to follow. While there is a little bit of true stop-motion using an articulated puppet that looks very much like an O'Brien designed creature, the great majority of the beast's scenes are done using a much cheaper and faster technique called replacement animation. This is done using a series of static figures, each sculpted in a slightly different posture. Put one down, shoot a couple of frames, put the next one in the series down, shoot a couple frames, etc.

The biggest downside to this is the replacement animation figures are much smaller and far less detailed than the articulated head used for the closeups, so there's a huge gap in quality between the two (and the less said about those feet the better). There is one sequence of Jimmy and Enrique on horseback being chased by the dinosaur that actually looks pretty damn good aside from the shoddy matte job, where the movement of the creature is very fluid and lifelike as it runs. Unfortunately, it must have been decided that when the dinosaur was just walking it didn't look dynamic enough, so more body movement was required to make it look more realistic. The result is that it constantly waggles its apparently three-foot-long tongue around like Gene Simmons and rolls its hips in a ridiculously jaunty swagger. It's dino burlesque!

This was the first movie to use stop-motion animation and be shot in color and Cinemascope widescreen, so that may go some way toward explaining why they didn't have any money to spend on the dinosaur, but I think at the end of the day it would have been a better business decision to go black and white and have a better looking creature. It has sort of the opposite effect of watching The Land Unknown, which sacrificed color film for production value. Instead of wondering why a movie that should be cheap looks comparatively lavish, with Beast you find yourself captivated by the sweeping vistas and great cinematography, only to be brought crashing back to reality by those goofy floppy monster feet.

Now head on over to Checkpoint Telstar for some more Allosaurus action!