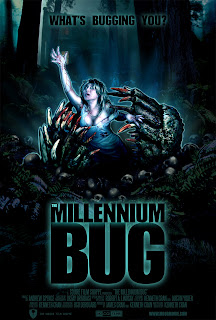 Look! Up on the screen! It's a backwoods horror movie! It's a kaiju movie! It's an 80's shot-on-video splatterfest! It's all of those things! It's Millennium Bug! The movie was made by an outfit called No CGI Films, which pretty much tells you all you need to know about the filmmakers' aesthetic. According to director Kenneth Cran, it was supposed to be part of a trilogy, which was going to attempt crowd funding. A brief poke around Google reveals no information about any sequels or prequels, so one would assume since this movie is four years old the crowd funding either fell apart or never happened. It's a damn shame too, because these guys really know how to rock practical suits and miniature effects. I'd love to see them get a little bit more money and do a full-on city smashing kaiju slugfest movie.

Byron Haskin (and if that's not an intentional reference to the director of War of the Worlds I'll eat my copy of War of the Worlds), his new wife Joany, and daughter Clarissa (who never once explains a damn thing), are headed into the woods to escape the predicted societal collapse when the clock strikes 12:01am on New Year's Eve 1999. Byron knows of an old abandoned logging town that should provide the perfect spot from which to watch the end of the world. Or just eat some s'mores, whichever.

Unfortunately, the old logging town is not nearly as abandoned as Byron had thought. One of the houses and some of the outbuildings are occupied by a clan of inbred hillbillies called the Crawfords. We meet them as the only female Crawford still able to bear children bears one on the dinner table (to the delightful line, “Dammit, ye're drippin' in mah beans!”). It proves to be horribly deformed, as increasing numbers have been over the years. Billa disposes of it and it is decided then and there that the Crawfords must have new blood in the family or face extinction. How unlucky that the Haskins set up their camp just a short walk from the Crawford homestead.

Billa and his brothers sneak up on the Haskins's camp while the family is sleeping and easily capture them. Keeping them captured proves to be not nearly so easy. Billa picks Clarissa as his new wife, but Byron and Joany have no intention of sitting idly by while their daughter is turned into breeding stock. After several escape attempts and fatalities on both sides, the younger Crawford brothers bring back another captive: cryptozoologist Robert Patterson. They're more interested in his video camera than the warnings of something huge about to wake up out in the woods, until it wakes up and starts smashing its way through the woods directly toward the nearest source of food. Guess what it likes to eat.

I'll talk about what I feel is the negative first. I can understand the need to keep the monster off screen for a while to build a little tension (and because it's the most expensive aspect of the production, of course), and so we have to spend some time getting to know the human characters. The Haskins are all well done, giving us enough information about their family dynamic to know that they're good people making the best of an odd situation. Clarissa's mom is dead, Joany is as close to her in age as she is to Byron, and despite the awkwardness that naturally arises from such a dynamic, there is none of the angsty, resentful teenage bullshit you would expect from a lazier writer. You can tell all three of them are dealing with any underlying tension and really do care about each other.

The Crawfords, on the other hand, are possibly the worst clan of crazy hillbillies I've ever seen in a horror movie. Every cliché imaginable from the backwoods horror genre is present without seeming to have any real thought put into what makes these things work. They're religious to the point of the elders constantly berating the brothers for swearing in the house, but they're perfectly fine with rape and other kinds of violence (hm...come to think of it, maybe they're just FOX News viewers...), and Trek Loneman as Uncle Hibby is the only one whose performance doesn't make me cringe every time he's on screen. I think it was mostly intentionally over the top, as they seem to be going for a sort of Troma aesthetic in these scenes. Thing is, aside from two or three movies I absolutely can't stand Troma flicks, so the stuff with the Crawfords is extremely grating to me. I think if they'd abandoned attempts at straight-forward humor and made them as menacing as they could it would have worked a lot better.

I wish we could have spent a little more time with Ken MacFarlane's Patterson. Not only would I have liked to know more about the bug (although Cran manages to strike that difficult balance of just enough explanation while leaving it mysterious and not hitting us with a massive info dump), I think MacFarlane deserved some more screen time to develop his character. He comes across as sort of a K-Mart Bryan Cranston, with loads of intensity but very little focus so he seems like a total spaz. Given a little more time I think something really interesting could have come out of this performance.

But none of us were really here for the story, were we? About halfway through the run time, the enormous creature slumbering under the ground finally wakes up and starts wreaking havoc, and what havoc it is! These guys really know how to build great models, and more importantly, how to photograph them to make them look as real as possible. There's some material in this movie that gives all but the best Japanese tokusatsu a run for its money, and coming from me that's high praise indeed. It's no Kyoto train station battle from Gamera 3, but the bug being only 40 or 50 feet tall instead of 200 allows a great deal more detail to be put into the model logging town. Since the whole movie was shot on a makeshift sound stage in a small warehouse, when Clarissa, Joany and Billa end up being hunted by the bug and each other in the town, the actors are green-screened into the models to great effect. It's not like you can't tell how it's all being done, but it's done so well and with such great talent that you really don't give a damn. It looks absolutely fantastic.

Once the monster action starts, that Troma-esque sense of humor I was talking about earlier really hits its stride too. Rather than relying entirely on exaggerated mugging and screaming human reactions to the gore gags for the comedy, the humor becomes much more visual (and considerably more mean-spirited) and we simply get some great gore gags.

Millennium Bug reminds me of nothing so much as one of those direct-to-video 80's splatter flicks shot on a home video camera by some friends just for the sheer love of horror and making movies, except this time the friends got some real film equipment and a great talent for practical effects. Don't let my ragging on the Crawfords fool you, this is one of the coolest monster movies of the last few years. I can't say enough good things about how awesome the kaiju mayhem at the end is. If you're burned out on digital effects and are craving some killer man-in-a-suit-smashing-models action, check this one out.

Be sure to keep an eye out later in the week for the final contributions to June Bugs from the rest of my chitinous comrades.