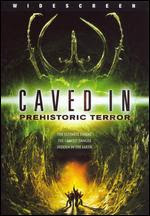 Some of my younger readers may not remember this, but there was a time when the Sci-Fi Channel used to both spell their damn name correctly and produce original features that weren't just exercises in hyperbolic irony. I'll grant you that tonight's movie is pretty paint-by-numbers and even has a whiff of the “mockbuster” about it (although you may be surprised which blockbuster it's mocking), but it's also a straight-forward horror flick. It was also an international effort, with production being credited to companies in Australia, Germany, Belgium, and the Netherlands in addition to the United States. A far cry from a bunch of bullshit from Asylum.

We'll get back to that. For now, the plot, such as it is. John Palmer, his wife Samantha, and kids Emily and Miles run a caving and climbing guide business which takes them all over the world. Just as they're about to embark on a long-awaited vacation to Greece, a man named Vincent offers them an enormous amount of money and a free stay at a fabulous villa in Switzerland in exchange for John's services in helping him and his associates to get to the bottom of an abandoned salt mine.

His associates are not terribly nice people, which we know because we saw them murder the old man who owned the villa and the land the salt mine is located on after chopping his hand off in the previous scene. We also know they're kerfucked because in the scene before that, we saw the people who ran the salt mine in the 1940s get eaten by giant beetles immediately after opening a chamber full of emeralds. The bad men who Vincent represents know about the emeralds but not the giant beetles, hence their desire to get to the bottom of that mine.

John has a bad feeling about this job, and so it is that Samantha and the kids stay up top with Stephan (who was the one who knifed the old man), while Vincent, Marcel, Ion, Hanz, and Sophie head down the mine shaft with some other expendable meat. It isn't long before they find themselves confronted with the same giant beetles that wiped out the original mining crew back in 1948. Luckily, some of Marcel's men are carrying laser guns (!), and so they're at least well-armed to fight the onslaught of giant prehistoric bugs waiting for them deeper in the mine.

Topside, Miles has disappeared while Emily becomes infatuated with Stephan. Samantha gets a weird feeling from the young man, and does whatever she can to keep her daughter away from him. When they realize Miles has gone down the mine after his dad, Stephan tries to communicate the situation to Marcel. Unbeknownst to him, Samantha speaks French well enough to realize some of the stuff he said over the radio means her family are in pretty serious trouble.

Things go progressively worse under ground as the team are whittled away by both the beetles and by fighting within the group. What's worse, the tunnel behind them collapsed some time ago, and it looks like the only way out is directly through the beetles' nest (where they have a queen which demonstrates that the writer either knows nothing about eusocial insects or just doesn't care because he wanted a big boss bug in his movie). Meanwhile, some of the beetles have found their way topside, and wouldn't you know it, the Palmers's villa is the first thing on the menu.

I remember watching at least part of this on cable back when it first aired and being mildly entertained, but I also remembered there being a lot of practical bug effects. Either I crossed some mental streams and actually watched a different movie but thought it was this one, or I paid precious little attention to it. Aside from one rather sad and very plastic-looking head that gets plowed through various doors and windows, the bugs are entirely rendered in CGI that looks exactly as crappy as every other bargain-basement CGI creature from the early 2000's.

That said, I was still mildly entertained, in large part because if I actually did watch this before, I saw it on TV where it would have been heavily edited. It was thus a great surprise to me how incredibly gory this flick is! Limbs chopped off, people being disemboweled, decapitated, and bitten clean in half, and gallons of spurting blood. These days when a movie is made for a cable premiere and destined to be direct to video, they're usually the exact same movie. It was kind of a shock to be reminded that these movies used to be made however the hell the filmmakers wanted and just had all the icky bits edited out for the TV version.

The buckets of grue are basically all the movie has going for it to make it stand out. The plot is as generic as they come, but these things hold up and get recycled a million times for a reason, and this type of movie is dumb fun most of the time. The performances are all acceptable but unremarkable. The best actor in the cast is definitely Colm Meaney but he isn't given much of anything to do other than scowl and die.

I mentioned before that this has something in common with the SyFy mockbusters of today. Okay, tell me if this sounds familiar: a group of people, some of whom are armed with high-tech energy weapons, at least one of whom has intentions about which they're not being entirely honest with the others, embark on a journey to find a place full of fantastic gems that are guarded by ferocious creatures, only to have things to horribly wrong and it all ends in fire. That's right, it's Congo with giant bugs! I realize that mockbusters normally not only play up their similarities to whatever they're cashing in on to the point of sometimes trying to trick people into thinking it's the other movie, but that they also tend to be released at the same time or even before their... “inspiration” is the wrong word here, so let's just call a parasite a parasite and say host film instead. Caved In missed the boat by eight years! Now, I know you're probably thinking, There he goes again, reading too much into a cheapjack monster movie copying plot points from sources eighty years old or more, never mind eight. Yeah, well I never said Congo was original, did I? How else would you explain the damn laser guns?

The quality of the movies is slowly but surely improving here during June Bugs. Don't worry, though. No more of this cable TV drudgery. The next one on the docket is a real treat! Be sure to hit up my fellow entomology enthusiasts for their latest entries in this pestilential plague of a roundtable, and we'll see you all back here next week. Don't forget the Raid.