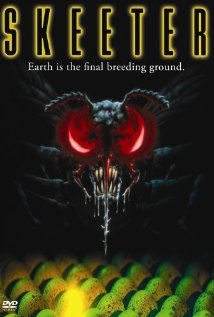 I was 11 in 1993, and just discovering Fangoria magazine. It took some doing to convince my mom that this was an OK thing to be buying with my allowance at the comic book shop. Of course, I was also buying every back issue of Dark Horse's Alien and Predator titles, some of which were far more inappropriate for a pre-teen than a horror movie magazine that featured primarily SPFX stills. Still, I discovered a great many things through that magazine. One of them was the eco-horror/killer insect boom that was taking place in the direct-to-video market in the early 90s. Although my mom's lack of awareness concerning R- and NR-rated movies has been chronicled elsewhere in these pages, it took free premium-channel weekends and staying at friends' houses for me too see a lot of these movies. Or, on occasion, just waiting for them to show up on Joe Bob Briggs's “MonsterVision” on TNT.

Of all of them, I think tonight's movie might have been the most disappointing. Aside from having far too little gore and nudity, it follows the 70's eco-monster movie formula to a T, and I think you can understand why therein lies the problem. An impressive list of beloved cult character actors is basically the only thing Skeeter has going for it.

Generic Evil Business Tycoon ™ Drake is developing the beautiful, pristine...er...desert wasteland that surrounds the sleepy little town of Clear Sky. I don't know what the hell kind of condos he's building out there (perhaps a few Darcologies from the old Sim City?), but they require the removal and disposal of an upsetting amount of toxic waste. Proper EPA-regulated disposal of huge quantities of mutagenic gunk being rather on the expensive side, Drake has just been tossing the stuff down an abandoned mine shaft where it shouldn't bother anyone for at least a few decades, when it eats through the canisters and starts leaking into the groundwater. But hey, Drake's an old guy, and by then he'll be dead or at least so senile they won't be able to prosecute him so the problem will fall on someone else's shoulders and he can go on playing grab-ass with the nursing home staff. Or, you know, the grave worms. Either way, Drake will be well out of it by the time the residents of Clear Sky start posting videos of themselves lighting their tap water on fire to YouTube.

Deputy Roy Boone (who we know is that tough-but-sensitive type of hero because he makes shitty Flashdance welding sculpture in his spare time) is very unhappy about Drake's buying up all the land in the valley because he really has a thing for rocks and cactus and rattlesnakes, I guess. His boss, Sheriff Ernie Buckle (Charles Napier!), is constantly warning him to leave Drake alone, which we all know means Buckle is in Drake's pocket because we've all seen this movie a few thousand times before.

Of course, if that was all that happened, this would be an even shorter and more boring movie than it is already. Naturally, some of those canisters of toxic crud broke open down in that mine and mosquitoes used the puddles as breeding pools. All right, class, what happens when insects who usually spawn in the water lay their eggs in puddles of highly toxic chemicals instead? If you said, “They all die”, then clearly you are not destined to be a maker of cheap monster movies. If you said, “They all grow to roughly the size of house cats and start killing people”, then you too could have made Skeeter. And I kind of wish you would have, since the Skeeter we got was directed with all the vigor and intensity of a bored zoo ape who can barely muster the energy to pick its nose before returning to its nap in the afternoon sun.

Sheriff Buckle pays the price for his bowing to corruption, as all such lawmen must in these movies, leaving it up to Roy, his fellow officer Hank Tucker, and his high-school sweetheart Sarah to destroy the killer mosquitoes and stop Drake before the other six people who live in Clear Sky are devoured and bulldozed into oblivion.

People accuse Rob Zombie of stunt casting, which I think is utter bullshit. Does he cast his movies full to the brim of beloved cult movie character actors? Yes. If you could make movies any damn way you wanted, wouldn't you? Why do people complain that the movies they watch are full of the actors they love? That's like buying a Steve Vai record and complaining it has too many guitar solos. We admire these actors so much because they're downright awesome at what they do. The job of a director is to make the best movie he possibly can. It follows that you'd want to cast the best and most reliable people you could find in your movie, and the best and most reliable actors sure as hell aren't found in mainstream Hollywood.

It's great to see some of these people in starring roles, because while most of them have CV's as long as a giant mutant skeeter's proboscis, the lion's share of those roles are bit parts because so many of the productions that hire them only have enough money to hire them for a couple of days. So while we have Charles Napier (Unfairly something of a b-list b-lister. While he's not as well known as your Tom Atkins or Bruce Campbell, I'm always pleased to see his name on a movie I'm watching because I know there will be at least one great thing about it. I have never once seen him turn in a bad performance.), Buck Flower, Jay Robinson and Michael J. Pollard to class up the joint for a few scenes, we primarily have to settle for looking at Jim Youngs and Tracy Griffith instead. Griffith isn't the worst actress I've ever seen, but she is at best instantly forgettable. Youngs, on the other hand, is consistently upstaged by his squad car.

Which brings us to the reason we're watching this movie in the first place; the skeeters. There is one animatronic “hero” skeeter head used for closeups that's pretty damn cool. And I've run out of nice things to say. Most of the rubber bats in 40's haunted house movies are more believable than the rubber skeeters being thrown at the actors by stagehands. The rest of the movie isn't nearly crazy enough for me to believe that it's supposed to be funny and that the mosquitoes are shitty and unconvincing on purpose, so I'm forced to conclude that the filmmakers completely blew their budget on the cool bit players and this was really just the best they could come up with. Let's just say that if you're able to buy into the monsters in this movie on any level, then you're probably genuinely concerned that Svengoolie is being attacked by vicious feral chickens every Saturday night.

There you have it. This year's June Bugs is off to a rather inauspicious start. Be sure to check out what my fellow film fiends have on the zapper, and come back next week for another heapin' helpin' of arthropod love.