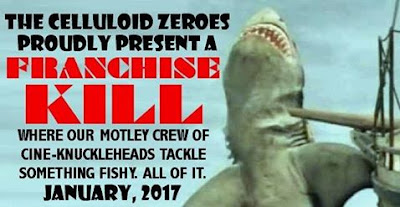 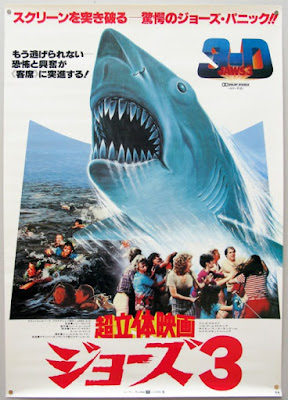 I come here to praise Jaws 3-D, not to bury it.

I've recounted elsewhere in these pages how my parents renting Jaws movies for me when I was very young and then my dad watching them with me and sitting behind me and scaring the shit out of me whenever the shark attacked or a dead body popped out was instrumental in jump-starting my love of horror. It was the original and this one that I watched over and over and over again. Jaws 2 was never at any of the video stores in town for some reason, so I didn't see that one until years later when we got satellite TV. Between Jaws, Jaws 3, and Godzilla 1985, it's amazing I ever found the time to watch anything else. I rented these movies so much that for the longest time the two Jaws movies blended together in my mind to the point that they were just one big jumble of scenes. Although you might scoff at the idea now, at that age no one is a great judge of quality. I also suspect that watching true classics along with low grade cinematic trash and enjoying them both equally at that point in my cognitive development is why, while I am now able to recognize the difference in quality, I can still get the same enjoyment from both today. I am fully aware that Jaws 3 isn't a good movie. I just don't care, and I love it.

Mike Brody is all grown up now and working at Sea World as a maintenance engineer and engaged to Dr. Kay Morgan, a marine biologist and dolphin trainer. His little brother, Sean, who has never recovered from the paralyzing hydrophobia (no, he's not rabid, put down the shotgun) brought on by the childhood shark trauma back on Amity, is coming to visit just as the park is about to open its newest and most elaborate attraction yet, a massive aquatic entertainment complex called the Undersea Kingdom.

There must be something about having a critical mass of Brody DNA in one place that attracts monster fish like Juggaloes to Faygo pop though, because no sooner has Sean dropped off his suitcases at Mike's house and hooked up with a cute water skier from one of the park's shows than people start disappearing and a 10-foot great white shark is caught swimming around inside the park's lagoon. As efforts are made to keep the shark alive and add the world's first captive great white to the media blitz surrounding the opening of the Undersea Kingdom, it becomes clear that Kay's new pet isn't the only piscine party crasher about the place.

In fact, the 10-footer that just went belly up in the kiddy pool was only a baby. A baby that was born inside the park to a prehistorically huge 35-foot-long monster that has taken up residence in one of the aeration ducts meant to pump oxygenated water into the new Undersea Kingdom exhibits (Among the many story elements that were changed or dropped as the script was fed repeatedly through a wood chipper, this shark was supposed to be the same one from Jaws 2. Can you imagine how much cooler this movie would be if the shark had a horrifically burned and scarred face with bits of skull exposed?). And don't you start asking questions about how long this behemoth has been hanging out completely motionless inside the duct while its pup grew to an angsty 10-foot shark teenager and started trying to take bites out of the tourists, or why there's only one of the damn things when great whites can give birth to up to a dozen pups at a time. Especially with such a gigantic specimen, there would be a whole flotilla of the little bastards swimming around.

Of course, having an obstruction that big in the pipe for that long can't be good for the machinery, and sure enough the pump motors burn out. When the duct gets shut down for maintenance, cutting off the steady supply of forced oxygen that kept the giant shark happy and still, mama decides it's time to come on out and belly up to the all-you-can-eat people buffet. Good thing Philip FitzRoyce, big game hunter and sport fisherman, is attending the Undersea Kingdom grand opening, and that he thought it prudent to bring a suitcase full of grenades with him. Look, I didn't write it.

Apparently neither did Richard Matheson, despite what the credits say. After Spielberg pitched a fit and threatened to leave Universal Studios when he found out they were planning to send up his masterpiece with a Joe Dante-directed National Lampoon spoof (co-written by John Hughes of all people!), the suits backpedaled and decided to make a serious sequel instead. They approached Matheson to write a treatment, which they then gave to Carl Gottlieb, who wrote a script, which they then gave to a bunch of script doctors, who must have called in some favors to the Mafia to have their connection with this movie erased from human knowledge for all time. Except for some dude called Michael Kane, who apparently wasn't made enough to keep his “additional dialogue” credit from jumping out of the screen as though it was COMING RIGHT AT YOU!

Yes, this was a member of the infamous part 3 in 3D gang, with first-and-only-time director Joe Alves thinking that jumping on the latest gimmick craze would give his freshman effort a better chance at box office success. Which turned out to be a solid gamble, as it made almost thirteen-and-a-half million dollars the first weekend and remained the strongest opening 3D movie for 20 years until one of the Spy Kids flicks dethroned it.

It was the first movie shot using the new Arriflex ArriVision single camera 3D system. Previously, 3D movies were shot in stereo at great expense and difficulty because you had to pay for two cameras, and two cameras' worth of film stock, plus they were a pain in the ass to keep aligned and if they weren't perfect the images tended to make people's eyes freak out and cause severe headaches (all but the best 3D even with today's technology does that to me, but I'll take their word for it). The ArriVision camera wasn't ready for use immediately, so filming began with an older StereoVision setup which they still used for a lot of second unit shooting. The superiority of the ArriVision system is glaringly apparent, as the bulk of the footage looks reasonably crisp but when you hit one of those scenes shot in the first week or just about anything by the second unit crew it's eye-searingly blurry even in 2D.

The experimental nature of the production becomes even more apparent in many of the effects shots. In another first, the movie's effects were composited with video gear rather than an old-fashioned optical printer because the process was faster. Of course, it also wasn't as good, especially when trying to match the video footage with the higher resolution film, and in an 11th hour decision the producers threw out almost all of the effects finished on video and redid as many as they could using an optical printer anyway. Of course, this meant that not only did they have to cut out a bunch of planned effects scenes, but they gave themselves nowhere near enough time to properly finish even the ones they kept, and the results speak for themselves. Even the notoriously over-ambitious Doctor Who serial “Invasion of the Dinosaurs,” the most tragic victim of Barry Letts's obsession with CSO effects, looks significantly less shitty than any of the composite shots in Jaws 3-D, a major studio movie made ten years after that serial, which probably had a budget roughly equivalent to what the Jaws 3-D people spent on toilet paper.

And yet, in spite of all these shortcomings, I absolutely adore this movie. I've seen it literally dozens of times. I'll probably see it dozens more. When I was 6 I didn't care that the effects looked like shit. Hell, I didn't even realize they looked like shit. If they were in a movie, they were clearly done that way on purpose because the people making the movie wanted it to look like that, right? Grownups know what they're doing. You don't realize until you're a grownup yourself that kids are far smarter and grownups don't actually have a fucking clue about anything important. All we're good for is buying groceries and doing taxes.

When I watch this movie, it makes me feel like a kid again. I don't care about the weird blurry footage (ok, I care a little because my eyes suck and it makes them hurt), I don't care about the silly effects, I don't care that the movie doesn't make a lick of goddamn sense. It sucks me right in every time. The underwater footage is eerie and still feels menacing to me. The sound design, which I know like the sound of my own breathing, makes me feel like I'm right there in that tunnel with the park guests, trapped by a monster shark. When FitzRoyce is getting chomped by the shark and we see and hear it from his viewpoint inside the shark's mouth, I can feel my chest compressing and my bones cracking because that scene, more than any other, fascinated and terrified me as a kid.

Jaws 3-D is a terrible sequel. It feels like an Italian Jaws ripoff that accidentally had the wrong title card put on it at the film lab. Jaws 3-D is a great sequel. It overcame one of the weirdest developments in film history to become a tremendously entertaining movie in spite of itself. Give it another look and see if it doesn't make you smile.

See what my fellow fishermen of filmic fiascos have to say about the rest of this Platonic ideal of diminishing returns:

The Terrible Claw Reviews -- The Shallows

Web of the Big Damn Spider -- The Sea Serpent