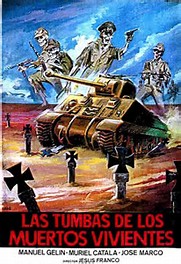 This Valentine's Day, my long-time (as in, love you, G.I.) reviewing compadre Anubis and I decided to celebrate our studly man love (is that solarmanite in your pocket, or are you just happy to see me?) by playing the relationship game, with a one-in-six chance of happiness and nearly overwhelming odds of just making each other miserable and bitter instead. We each put together a Whitman's Sampler of movies, containing one flick we deemed a real sweet pecan turtle of a show, with the rest being those ones full of tomato paste and drain clog hair that only old ladies seem to like. I'm going out on a limb here and saying that tonight's movie was meant to be one of the latter, but knit me a doily and call me Florence because I like this flick.

Our story opens with a couple of tourist girls in shorts that would make Gamera blush driving into the middle of goddamn nowhere in the desert because Brunette has heard stories about the oasis there and wants to check it out. Blondie, sensibly, wants nothing more than to go back to the hotel and drink margaritas by the pool, but her objections fall on deaf ears. If you can't figure out what happens next, Chrissie Watkins would like to go for an early morning swim with you.

Now that we've been assured beyond a doubt that there will, in fact, be an oasis full of zombies in Oasis of the Zombies, we are introduced to Kurt Maitzell and his wife, who are going to visit an old acquaintance of Kurt's. Did I say acquaintance? Sorry, I meant deadly enemy. The man in question is Captain Robert Blabert, formerly of the British army. Kurt was a colonel under Rommel's command in the Afrika Korps, and some of his men had been charged with transporting $6,000,000 worth of gold across the desert. Blabert's forces intercepted and ambushed them before they reached their destination, but the battle was so evenly matched that Blabert was the only one who made it out alive, and even he wouldn't have survived had he not been rescued by sympathetic nomads and taken to Sheik Mohamed Al-Kafir.

As far as anyone knows, the gold was never recovered because its location was known only to Captain Blabert. Kurt has come to him with a proposition that they put aside their differences in the name of Baal and go claim the loot for themselves. You'd think after spending his entire military career fighting the bastards that Blabert would have learned one very important lesson: never trust a Nazi. Then again, a dishearteningly large number of Americans who fought the same war helped to vote one into the White House a few months ago, so what the fuck do I know? The minute Kurt sees the map with the location of the gold marked on it, he kills Blabert and hightails it into the desert with his wife and a couple of goons to get rich.

When Captain Blabert's son, Robert, receives news of his father's death, he begins preparations to travel to Tripoli where the old man was killed. While going through some of the estate materials, he finds dad's diary, which t-bones the movie so hard with a flashback that it's gonna be a good long time before the narrative tow truck can drag the plot back onto the road, and even then it may never be drivable again. We see the battle between the allied commandos and the German caravan, plundered from some other movie that had the budget to show such a thing. We also see the convalescence of Captain Blabert in the camp of Sheik Al-Kafir, and find out that he repaid the sheik's kindness by knocking up his daughter, Ayesha. Yep, turns out Robert is half Arab royalty!

Robert tells his friends Ronald, Sylvia, and Ahmed about the diary and the gold, and decides settling dad's estate can wait if there's six million Nazi smackeroos out there in the desert just begging to be dug up and spent. Never mind that they'll have to set up their own smelting operation to turn the gold into something that doesn't have swastikas stamped all over it, but I'm sure they'll figure that out after they've lugged almost half a ton of gold (at 1983 prices, $6,000,000 worth of gold would weigh a little over 800 pounds) all the way back to London (an interesting conversation with the bag check people, right there). Of course, considering they make the trip to the oasis in one little jeep that can barely fit the four of them, the odds of these morons getting out the desert alive even without being attacked by zombies seem pretty fucking slim to me.

Kurt and his crew arrive at the oasis and the second the bosses turn in for the night, their two local hired hands (whose dubbed voices make Kobayashi's Barney Rubble voice in Gigantis, the Fire Monster sound positively dignified) immediately start planning to ditch them. While they're arguing over whether to take the gold or just get the hell out of the haunted oasis before they join its restless spirits, the German zombies take the choice out of their hands and rise up to lay waste to the camp. All this is, of course, timed perfectly for Robert and his crew to arrive in Tripoli and have their efforts to chat up the expedition of an anthropologist named Denikan and his two assistants interrupted by Kurt stumbling back into town covered in bite marks and dying right in front of them. Surely, you must be thinking, this would be enough to deter anyone from going anywhere near where this guy just came from, right? To that, I say three words. One. Fucking. Jeep. Maybe that's why they wanted to get chummy with Denikan's group. They realized they were in way over their heads and wanted to hang out with someone capable of actually making a plan before heading into a life-threateningly hostile environment.

Even after Sheik Grandpa shows up on the scene and warns his grandson about the dangers awaiting them if they continue on to the oasis, the morons persist in walking right into the jaws of Kurt's erstwhile troops. One. Fucking. Jeep.

For reasons known only to the gods, Franco pulled a Universal Dracula with this script and shot two essentially identical versions of this movie; one in French and one in Spanish (you'll notice the poster image I used is for the Spanish version, because it's cooler than any of the French versions). Not what you'd expect from a filmmaker whose attention span was so short that he was notorious for getting bored in the middle of a shoot and wandering off to start another movie before the last one was finished! Even most of the cast was the same. As far as I know, the only drastic difference is that in the Spanish version, Kurt's wife is played by Lina Romay. It's too bad, then, that when it came time for American distributors to grab this flick to feed the ravenous VHS beast, they picked the French version. If you have a choice, always go with Lina Romay. Maybe some day Arrow Video or Severin or someone will get a print of the Spanish version and throw some subtitles on there for an ultimate edition Blu-ray so the six people who are actually interested can do a side-by-side comparison of the two movies. I know I'm curious.

Like I said up top, I rather enjoy this movie. Yes, the dubbing is awful even by the low standards this type of movie is generally judged by; and yes, it bogs down something fierce at the midpoint; and yes, the zombies take for fucking ever to show up. When they finally do appear, they're pretty cool and inventive on a shoestring budget. Many of them have wrinkly, desiccated skin to show they've been dried out and preserved by the desert climate. My favorite one is actually a largely inanimate puppet that looks a bit like Dr. Tongue from Day of the Dead, but the way Franco shoots him makes him creepy and effective rather than laughable and cheap.

What really works for me in this movie, though, is the story. I'm not talking about the plot holes you could drive a camel through, like the fact that Robert is a good twenty years too young for the circumstances of his birth to be what they are, or that Captain Blabert doesn't age between the 40-years-ago flashback and present day. The idea of an oasis haunted by the restless undead corpses of Afrika Korps troops guarding a cursed treasure is fucking awesome. It's more or less the same basic plot used in the far superior Zombies of Mora Tau, except that this time the zombies are Nazis, and I have come to the conclusion that no matter how sick I get of zombies, I will never, ever get tired of Nazis, zombie or otherwise, as the bad guy in stories. I'm not even trying to make a political statement now, just stating that I think Nazis will always be a fascinating choice of villains in fiction. They just intrinsically fit. Maybe it's because they were worse in real life than they could ever be in a movie or book, so no matter how horrific you make them, they inevitably come across as a de-fanged version of the real thing, and yet that connection to history makes them more believable than any villain created from whole cloth. I dunno. I'll leave the psychological analysis to the pros and just say that Nazis are great. In movies and comics. In real life, they're only good for punching. Fuck real Nazis. What the hell was I talking about?

Ah, right. Oasis of the Zombies. Most people think it sucks, and most people are probably right. I dig it, though, and you should give it a chance. I think there's a genuinely awesome movie hidden in there if you look in the right places, and when I watch it I feel like I'm watching a far better movie than I know I really am. This thing is just begging for a remake from someone who knows how to tease out those elements of greatness. I'll help write it. Give me a call. Let's make a movie!

Now head on over to the Tomb of Anubis and see if he's recovered from the exploding semen confetti card I sent him along with The Greasy Strangler.