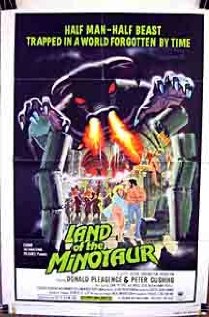 As I was thinking about angles for starting this review, I realized that one I fall to frequently when a movie is baffling or when I’m just lazy and creatively bankrupt enough that I have nothing useful to say, is making up some horseshit dramatization of how the movie came to be.  In fact, I did an entire review for the Lou Ferrigno Hercules as a transcript of the crack-addled pitch meeting that led to the production getting green lighted.  Did you guess from reading that paragraph that I’m about to do it again?

Once upon a time, there was a producer who was running out of space to store things.  He was a tremendously successful man, and his offices were overflowing with film canisters of projects he had sold.  Into a drawer in a desk in the back of his storage room, behind an old refrigerator filled with empty Milwaukee’s Best Light cans and a dead whore, were dropped an early work print of The Wicker Man and a lost episode of Scooby Doo.  They sat there for many years, and over enough time, what happens to vegetables in the crisper drawer in your fridge happens to film, too.  Well, can you prove it doesn’t?  Then shut up.

Anyway, eventually the producer died and his effects were sold off.  A Greek named Kostas Karagiannis won at auction the rights to all the stuff in that storage room.  After cashing in $17.35 worth of empty Milwaukee’s Best Light cans and burying the whore’s bones, he opened that desk drawer and scraped up the fused film off the bottom.  He used the $17.35 to hire Donald Pleasance and Peter Cushing to shoot some extra footage for marquee value, and released it as Land of the Minotaur.

Tom, Ian and Beth are archeologists.  Or possibly archeology students on vacation.  Anyway, they like digging for shit, which brings them to Greece to visit their old friend Father Roche.  They show him a gold trinket in the shape of a bull’s head and tell him they believe it’s evidence of an ancient civilization under some ruins on the hill overlooking the little village where they’re staying.  You’d think the ruins themselves would be pretty solid evidence of an ancient civilization, but I have no vague affiliations with the practice of archeology, so what the hell do I know?  Roche warns them to stay away from there, as a couple of hikers disappeared there and were seen being murdered in the opening scene, but this would be a mercifully shorter movie if they just went home, wouldn’t it?

They sneak out of Roche’s house in the night, afraid he’ll keep them from their dig.  Next morning, Beth goes back to town for breakfast supplies and drop off a letter Tom wrote to his wife Laurie inviting her to join them, while Tom and Ian go to explore the ruins.  She runs into Baron Corofax (already known to us as the leader of the cultists, wearer of the snazzy red robe with the gold borders around the eye holes that make all the other cultists look a bit like Sontaran KKK members) at the general store, where she asked the clerk for a dozen eggs, half a pound of bacon, and a loaf of bread.  In her hands when she leaves are none of those items, replaced by a bag of what appears to be cheese puffs, a bag of pre-popped popcorn, a can of orange juice concentrate, and a large package of toilet paper (probably wise if you‘re going to live on nothing but cheese puffs for the entire vacation).  When she returns to the hillside, they’ve disappeared.  She goes snooping for them around Corofax's grounds that night, and winds up getting captured.  Can't run away from even the slowest-shuffling cultists in platform heels.  Let this be a lesson to you, ladies.  If you wear impractical shoes, Peter Cushing will stab you in the heart.

Now we’re treated to way too much footage of the average day at an airport, with signalmen waving landing planes toward their respective gates.  Eventually we see that the reason for all this is the arrival of both Laurie and Roche’s private detective friend Milo, who looks like a white-haired Greek version of Eric Estrada.

Were I to describe the entire rest of the movie, you’d get bored pretty quick if you weren’t already.  This is where the Scooby Doo influence comes into the foreground, as it’s discovered the entire village is made up of a pagan cult who worship a big fire-breathing minotaur statue beneath the ruins.  For the next forty-five minutes or so, it’s basically that scene in every episode of Scooby Doo where the monster chases Scooby and company in and out of a bunch of doors in a hallway, with Laurie getting kidnapped, Roche and Milo chasing after her, getting chased by the cultists, chasing the cultists, running back home for some shit they forgot, and then some more chasing.

At some point during the chasing, during which the cult members don’t seem very concerned with actually catching their quarry and are content to just sort of amble around, Milo runs one over with his swingin’ bachelor van and drags him for several miles.  The man just smiles at them and walks away… when he had a perfectly good opportunity to kill or capture both of them!  If he’s impervious to being dragged behind a vehicle for all that time he can surely take a muffiny-haired PD and a doddery old priest!  But this clues Roche in that his suspicions are correct and there really is a supernatural power at work, so he runs back to the church for some holy water, which they sneak into the catacombs with and make the minotaur statue and all the pagans explode!

It’s too late for Ian (who is credited as Nikos Verlekis, who is apparently not the same guy as Gabriel Yorke, who played Alan in Cannibal Holocaust, although you’d swear they were at least twin brothers) and Beth, but they rescue Tom and Laurie and all the children of the cultists, because they’re young and pure and incorruptible and blah blah blah the end.

I would not have believed it possible to make a movie with Donald Pleasence and Peter Cushing and have it be this boring.  Cushing barely emotes (although at this point he was so old he was starting to look like John Carradine in Ice Pirates so he may have just been tired), and Pleasence, in what should have been a fine opportunity for him to be at his most unhinged, only gives us a little taste of the ol’ Pleasence crazy at the very end when he’s shaking holy water on the cultists and making them go kaboom.

And although we’re given irrefutable evidence that the cultists really do have supernatural powers, we’re never told where they come from or why.  The minotaur statue talks, but there’s never any indication whether it’s possessed by an evil spirit, or if the cultists simply use it as a focal point to concentrate their own possessions and the real show runner is somewhere else.  You’d think writer Arthur Rowe, who had done a few other feature films and an impressively lengthy TV resume with some pretty good shows like Kolchak and The Six Million Dollar Man, would know better than to make us stare at that statue’s schlong for the whole movie and never give us a good reason for it.