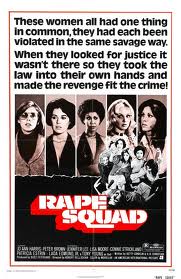 It's fitting that tonight's review is written using Microsoft Word Pad because an actual word processor wasn't available.  Not that I really need a lot of freedom with fonts and such, but this cold user interface is similar to what main character Linda experiences with her first confrontation with the cops in tonight's movie.

The story is simple.  Linda is attacked and raped by a guy in a hockey mask who makes her sing "Jingle Bells" while he's putting his pathetic, power-obsessed fuck sausage to her.  When she goes to the police for help, the best they can do is a desk jockey who interrogates her using an uninformative questionairre while glib officers make background remarks about wishing someone would force sex on them.

After a session of pin the tail on the rapist in a lineup identification booth, she confronts her fellow victims outside the precinct and forms a team who agree to learn karate in order to bring their collective rapist, Jingle Bells, to justice.

There's little to analyze or even discuss in this load of crap from A.I.P., a firm I previously had nothing but respect for not only because of their savvy business sense and collaboration with Roger Corman, but because of their hometown ties.  Sam Arkoff is from Forest City, Iowa, a town less than two hour's drive from where I live.  Incidentally, they also have a great firsbee golf course.

Clearly the movie wants to be a cross between Dirty Harry and Last House On the Left, but fails to be either.  While trying to empower the women victims/vigilantes, the movie continuously undercuts them by presenting them as objects of desire by showing them in gratuitous nude scenes.  When trying to present the Rape Squad as a group of vigilante badasses taking charge where the police dare not,  the movie continuously undercuts them by showing them squabbling about whether or not to involve the police, and ultimately unable even as a karate-trained group to be able to take on a lone gimmick-obsessed rapist without bickering to the point of endangering several of the supposedly self-sufficient members who get wired up in cages in the grounds of an abandoned zoo.

Fuck this movie, hard and long.  If the writer, director, or any of the actors could have pulled off even a fraction of what it supposedly stands for, this would have been a solid effort in the fight to crush anti-feminism and emasculate redneck caveman rapists who view women as nothing but sex toys.  As it stands, this worthless flick empowers the basest of those sentiments while thoroughly undermining the worthy ones.  The most frustrating thing is that in capable hands, it could have been all it promised to be.  The world could really use a fully feminist Rape Squad vigilante movie.  I'd love to see more neanderthal trailer park fuckwits get what's coming to them on celluloid.
Posted by Bryan Clark at 11:48 PM