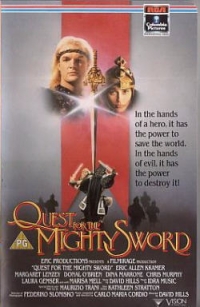 As any of you who have followed me here from the Tomb of Anubis probably know, I have a deep and abiding love for the Ator movies.  For those poor, sad bastards who have never had the pleasure, Ator is a cheap, silly Italian Conan the Barbarian knockoff created by the undisputed king of Eurosleaze, Joe D’Amato.  I once celebrated the completion of a particularly lengthy reviewing project with a triple feature of what purists (and by purists I mean me, because I’m pretty sure no one else in the entire world gives nearly as much of a shit about these movies as I do, including everyone involved in the production of them) consider the “true” Ator trilogy.  That is, the first three Ator movies that star Miles O’Keeffe in the title role.

Ator is the mighty fulfiller of prophecy in a far off land long ago.  He bears a mark in the shape of an eagle, symbol of the god Torin, who also gives Ator an unbreakable sword to smite his enemies to ruin and ash.  He brings down the evil spider god (with the help of just the cuddliest wuddliest bear cub you ever did see), smashes and scatters a dime-store Cult of Set, and even faces off against his evil twin brother to prevent the armies of darkness from overrunning the land.

Well, I always avoided what I considered to be the bastard son of the Ator franchise.  I assumed Quest for the Mighty Sword was shut up in a basement somewhere, getting fed through a slot in the door and given sedatives when company was over so they wouldn’t ask about all that banging around downstairs and why was there always an empty space on the DVD shelf right after Iron Warrior?  Why would I think that?  Miles O’Keeffe wasn’t Ator.  He invested the character with a lot more fun and charm than it really deserves, and if he couldn’t even bring himself to show up on set for a fourth go ‘round, why should I bother watching it?  After all, few if any b-movie character actors have the humility and good humor about their jobs that O’Keeffe does.  While Joe Don Baker was issuing threats of physical violence to the MST3K crew for the bashings he took, O’Keeffe took the jabs with a smile and a great quote, “Acting is a silly way to make a living”.  He was just glad his work was bringing happiness and entertainment to a new audience.  What a class act.  And if even he thought it was such utter ass that he couldn’t put his name on it, well… yikes.

We begin once more in the land of Dragor.  Ator, now a wise and mighty king, passes judgment on a band of criminals accused of rape.  He leaves the final call of justice up to the Sword of Torin - if any of the criminals can best him in combat, the divine blade must deem them worthy of life, and they may go.  But they’re rapists, so guess what happens to them?  Now something is a little strange here, and it may just be a coincidence, but I’ll let you decide for yourself.  In the first movie, Ator the Fighting Eagle, Ator was in love with a girl named Sunya.  In the narrated prologue of The Blade Master, we find out that she was killed and that’s why Ator is off in the far east learning kung fu from Thong.  When we see King Ator here, he’s flanked by his wife, Queen Sunn, holding his son, also named Ator.  The way Sunn’s name is pronounced throughout, it sounds and awful lot like they’re adding the extra “ya” syllable.  This could either be a fluke in the dubbing, or a big flashing neon sign that says D’Amato doesn’t give a flying fuck about continuity.  Given my knowledge of the man’s work, that’s not exactly far fetched.

An evil dude named Thorn shows up and kills King Ator with a spear.  Sunn runs off with Ator, Jr. and hides him with a creepy troll-looking (more on that later) thing named Grindel.  In exchange, Grindel makes her drink a potion which she thinks will end her life and exile, but in fact makes her so horny she goes and fucks the horrible troll, all the while he giggles and some astonishingly inappropriate whimsical music plays.  The fact that she boinked a creature that makes the Leprechaun look like Clive Owen drives her crazy, and off she goes.  This is the first, but will not be the last atrociously sleazy indignity the movie will heap upon poor Sunn.

Eighteen years later, baby Ator has matured into the guy who played his dad a few minutes ago, and after a few false starts he manages to find and reforge the mighty Sword of Torin (called the Sword of Grah or some such bullshit in this, which further proves that this sequel just doesn’t care about anything) and kill Grindel while the inexplicable stone Dimetrodon in Grindel’s living room looks on.

Guided by the wisdom of Grimilde (a way past her prime Laura Gemser), he sets off to rescue DeJanira (Margaret Lenzey, who is maybe the single worst actress I have ever seen) the ex-immortal, who is bound in a circle of fire for trying to meddle in the affairs of men or some shit.  The first thing he has to do is get her out of that circle of fire, and to do that he must fight his way past a goofy two-headed “nearly invincible” robot and offer the Treasure of the West to some unspecified gods.  He does this by tricking the robot into walking into a wall, chopping it in half, walking into the treasure chamber, and saying, “I, Ator, offer the Treasure of the West to the gods!”, and then he just fucking walks out!  It’s like the movie at this point looks the audience square in the eye and says, “Look, I don’t give a shit.  You can watch or not, but I’m just gonna say up front here, this is the most effort I’m going to put in.”

Then he goes and finds DeJanira, rescues her from the bed she got tied to after the circle of fire went out, and they have some adventures.  Their adventures lead them to a tavern where Ator saves a skanky prostitute from being beaten to death.  She of course thanks him by offering her body, but guess who the half-crazy whore is?  That’s right, it’s MOM! YEEEEUCK!  Not only did she have to fuck a troll, but she came thisclose to banging her son!  And come to think of it, this is the second D’Amato flick I’ve seen where a character offers gratuitous thank-you sex.  Of course, the other one followed through.  Praise Satan this one didn’t.

Some other crap happens, but I’m just going to wrap this up because the movie doesn’t care, and honestly dear reader, neither do I. DeJanira gets kidnapped by the pustule-covered King of the East and his pet troll Thorn (we're never told whether it was him in disguise who killed the original Ator at the beginning, or if it's just another "who cares" moment), who is played by not only the same actor as Grindel, but the same troll suit with a different wig as well.  Ator rushes into what is clearly the same castle he carpet bombs from his hang glider in Blade Master and saves her.  They and their boomerang-throwing partner Skiold ride off into the sunset.  But then that damn troll pops up and starts his goddamn laughing again!  Which is apparently supposed to be a surprise shock ending except that the second troll we see laughing here was never really a threat to anyone (unless it was him who killed King Ator, in which case AAAGH!).  The movie starts on a low note, noodles toward mediocrity for a bit in the middle, and then farts away any goodwill it managed to build up in the parting shot.

Yes, I skipped them meeting Skiold.  Doesn’t matter.  That’s the mission statement for this movie - “Eh, it doesn’t matter.”  Guys with Scandinavian names throwing boomerangs.  The King of the East being a pasty white guy covered in sores even though we've already been introduced in a previous movie to the fact that people from the East in the continuity of this universe look just like people from the East do in our world.  Ator played by the guy who was Thor in the old Incredible Hulk TV show.  An overall sense of this being aimed more at children than the other movies in the series yet having Ator’s mom rubbing herself all over a drooling troll and offering to boink her son!  And I said I’d expound on the troll angle earlier.  This is the same troll suit used in the undeservedly notorious Troll 2, and this was billed in some countries as the third movie in that franchise.  The suit was undoubtedly used just for that reason, but three years later a totally different movie would be billed as the same sequel!  I would imagine those were different markets than those where Contamination .7 was sold as Troll 3, but who knows.  It’s perfectly fitting that no one cared, because not a single bit of effort was put in by anyone on either production and I’m sure they were just happy to get their money back any way they could.  Not that the name recognition of the mighty Troll series would have been relevant at that point.  No ironic hipster douchebags would arrive to carry that callously manufactured torch for more than a decade.

I will say that, if we can’t have Miles O’Keeffe in the lead, Eric Allan Kramer is an acceptable substitute.  He has a big goofy dumb guy quality that, while it doesn’t disarm the suck elements of the flick as much as O’Keeffe’s easy charm would have, at least shows that someone was having a good time making the movie, and that translates to the audience quite well.  You feel like he’s winking at you from the TV, telling you it’s in good fun and all will be well.  Not to mention the unintentional comic relief of his hair. In an attempt to recreate O’Keeffe’s lustrous curls, they had Kramer grow out his wispy, thinning, bleach-blonde fuzz to about shoulder length and then crimped it.  This has the hilarious effect of surrounding his head with a gently waving halo of glowing, crimped fluff like a bed of seaweed lolling in a soft current every time the slightest breeze kicks up on the filming location.
Posted by Bryan Clark at 5:42 PM